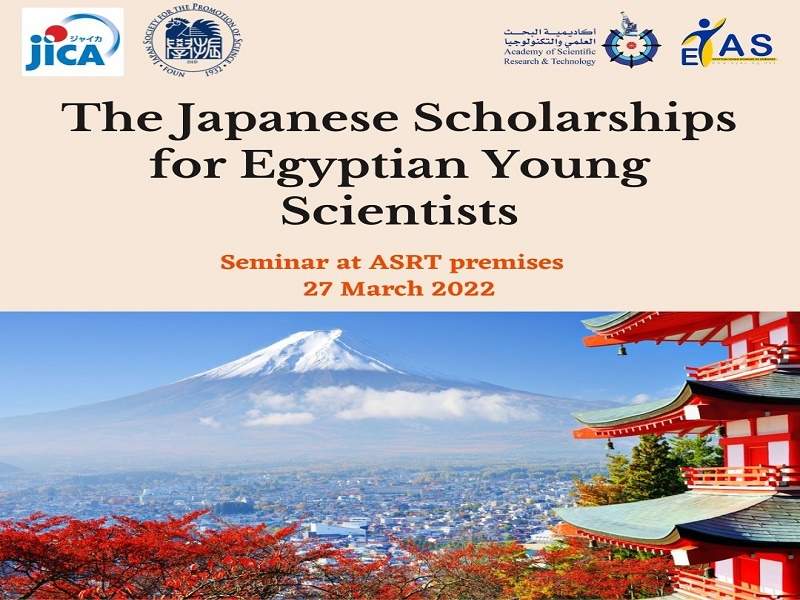 The Scholarships Welfare Office at Ain Shams University announces the scientific symposium "Means of Japanese support and grants for young Egyptian scientists" organized by the Egyptian Youth Academy of Sciences under the auspices of Prof. Dr. Mahmoud Saqr, President of the Academy of Scientific Research and Technology, and in cooperation with the Japanese Science Development Authority.

This symposium comes within the framework of the role played by the Egyptian Youth Academy of Sciences "EYAS" in activating the role of youth in the science and technology system, especially in linking the Egyptian and international scientific community to develop the scientific capabilities of young researchers and scientists in Egyptian universities and research centers.

These activities contribute to raising the efficiency of Egyptian scientists and providing ways to support research projects, in addition to exchanging experiences with Japanese scientists.

The symposium deals with various topics, including the presentation of various funding methods and opportunities from all Japanese scholarship bodies, as well as scholarships for master's and doctoral students and research missions with scholars in Japan. 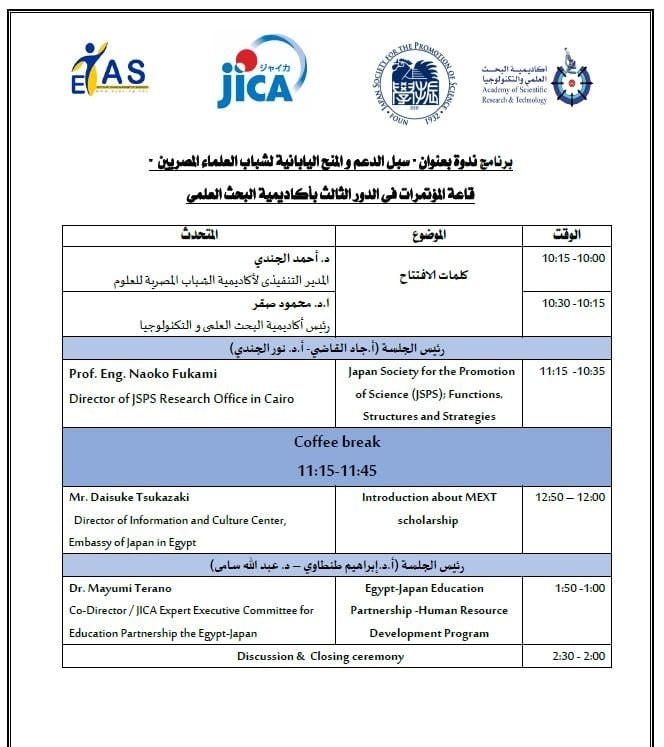 The symposium is scheduled to be held next Sunday, March 27, 2022, at ten in the morning until three in the afternoon, in the conference hall at the site of the Academy of Scientific Research and Technology on Al-Qasr Al-Ainy Street in Cairo, with the application of all precautionary measures against the Corona virus.

The symposium will be organized by Dr. Nour Fathi Shehata, a member of the Egyptian Youth Academy of Sciences "Ayas" in direct coordination with Dr. Ahmed El-Gendy, director of Ayas, d. Abdullah Sami - Director of the Scholarships Welfare Office at Ain Shams University and co-chair of the Youth Academy "Ayas" is one of the chairpersons of the sessions scheduled during the symposium's activities.

The symposium will be lectured by the Director of the JSPS Research Office in Cairo, representatives of the Media and Culture Center at the Embassy of Japan in Egypt, the JICA Committee of Experts for the Educational Partnership between Egypt and Japan, and members of the Board of Directors of the Egyptian Association of Grantees of the Japanese Authority for Science Development.

To participate in this seminar, please review all the details through the following website:

A certificate of vaccination is required to enter the Academy's website to attend the symposium.