O'n" University was established about 5000 years ago, and it had a wide fame as a center of knowledge and learning, especially in astronomy, engineering and medicine. Perhaps a perfect example of the knowledge and skill of "O'n" teachers is Imhotep, the chief priest, minister, and architect, who in 2700 B.C. designed the first large structure of stone known in history, Zoser's Step Pyramid in Sakkara.
Westcar Papyrus also states that the founder of the Fifth Dynasty was the Rector of "O'n" University before ascending the throne. However, the most important achievement of "O'n" University was the call for worshipping a single deity, the solar disk of Aton, at the hands of Akhenaton, who was influenced by the ideas of "O'n" priests. The emblem of the university, the obelisk and two hawks, establishes a link between the name and the ancient history of the university. The obelisk stands for the house of life at the city of "O'n", whereas the two hawks are symbolic of Horus, the Egyptian god at that time. The university is now located in the area of the Zaafaran Palace, built during the regime of Khedive Ismail. The Palace was so named because the area surrounding it was famous for saffron (in Arabic Zaafaran) plantations. 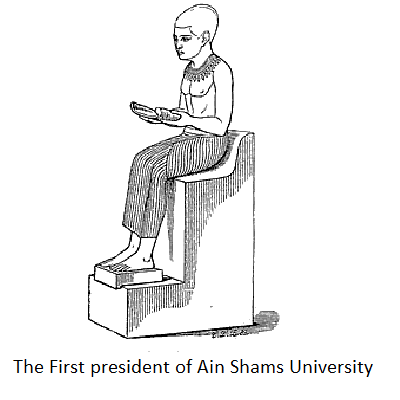 Ain Shams University comprises seven campuses, all of which are sited in Great Cairo. The university administration, faculties of Arts, Law and Science are all located in the main campus, El-khalifa El Mamoon Street, Abassia. The faculties of Commerce, Al-Alsun (languages), Pharmacy, Dentistry, Computer and Information Sciences, Institute of Postgraduate Childhood and Institute of Environmental Studies and Research, together with the specialized Hospital are located on the second campus on the other side of the aforementioned street. Faculty of Medicine and Faculty of Nursing together with the university hospitals are located in another campus at Abassia. Faculties of Engineering, Specific Education, Education, Women and Agriculture are located each on a separate campus in Abassia, Heliopolis and Shoubra El-Kheima, respectively.