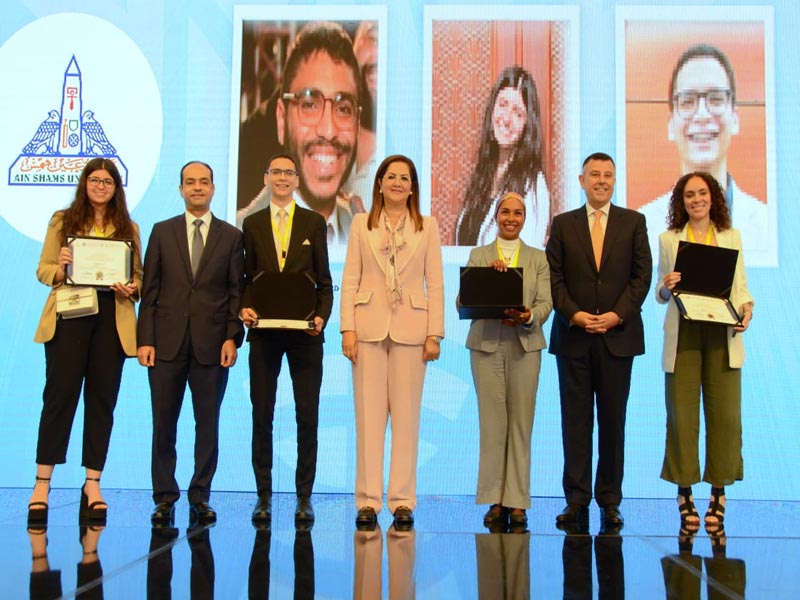 The project submitted by Ain Shams University under the title "The Role of Information and Communication Technology in Confronting Violence against Women" at the level of development projects participating in the final qualifiers, won the fifth place, during the celebration of the conclusion of the Youth for Development initiative launched by the Ministry of Planning and Economic Development in cooperation with The Ministry of Higher Education and the Supreme Council of Universities.

Her Excellency also honored Prof. Dr. Hiam Wahba, Vice Dean of the Faculty of Commerce for Graduate Studies and Research Affairs and the General Coordinator of the initiative of Ain Shams University, members of the coordinating committee of the initiative and coordinators of the participating universities in appreciation of their efforts in making this initiative a success, which lasted for a period of six months.

During her speech, Dr. Hala Al-Saeed shed the light on the role of young people in participating in such distinguished projects, as they will have to follow up on the achievements and challenges and improve them in the future to achieve Egypt’s Vision 2030, stressing that this initiative came as an expression of the Egyptian state’s orientation to follow the participatory approach in all development plans since Launching Egypt’s Vision 2030 in 2016, which is the national version of the UN goals, explaining that the launch of the vision was carried out with the participation of the government, the private sector, civil society, universities, youth and women, who represent an active element in that vision and in all development plans.