A cooperation protocol between the Ministry of Higher Education, 15 public universities and AMIDEAST to establish centers to serve and support people of determination in Egyptian universities 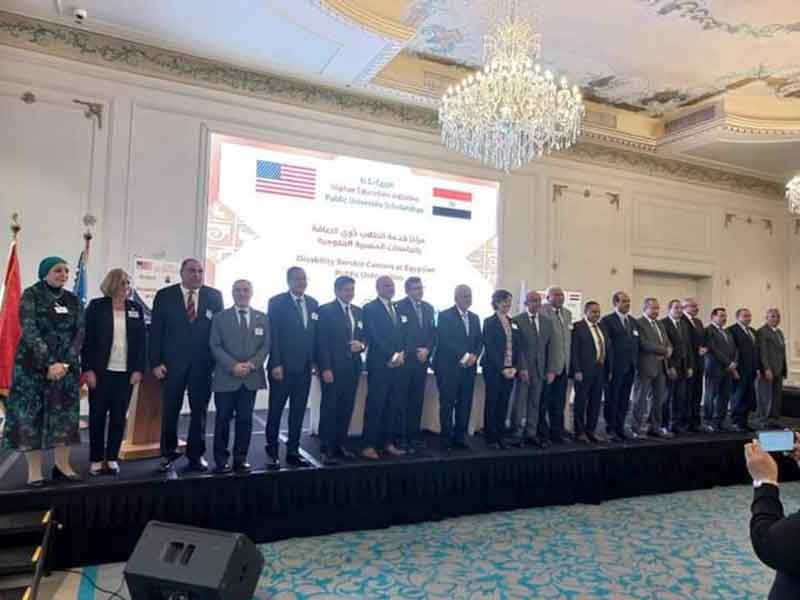 A cooperation protocol between the Ministry of Higher Education, 15 public universities and AMIDEAST to establish centers to serve and support people of determination in Egyptian universities

Dr. Ayman Ashour, Deputy Minister of Higher Education for University Affairs, signed a protocol of cooperation between the Ministry of Higher Education and Scientific Research and 15 public universities on one side, and the American organization AMIDEAST on the other; To establish centers to serve and support people of determination in Egyptian universities during the next two years, and the protocol was signed by AMIDEAST represented by Dr. Quincy Dermody, Director of the Public University Grants Program at AMIDEAST, in the presence of the presidents of the fifteen universities, representatives of AMIDEAST, the United States Agency for International Development, the Ministry of Higher Education, and Dr. Adel Abdel Ghaffar, media advisor and official spokesperson for the ministry.

In his speech, the Deputy Minister for Universities Affairs stressed the ministry and the Egyptian government's interest in people of determination, and taking concrete measures to create an appropriate environment for them, as they are an integral part of society, and they have rights, and their right to integrate into society, and to obtain training and support; To enable them of their rights, pointing out that universities are developing plans and programs to provide equal opportunities for people of determination. 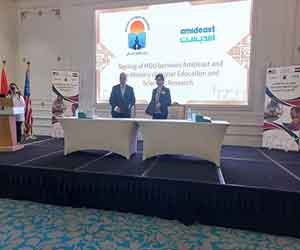 Dr. Adel Abdel Ghaffar, Media Adviser and Official Spokesperson for the Ministry of Higher Education and Scientific Research, said that the centers for people of determination in government universities are working to enhance awareness of the rights of people of determination, support the enrollment of these students in new fields of study, train professors on inclusive teaching methods, ensure the provision of appropriate facilities, and develop a plan to renew Buildings are accessible to all types of disabilities, and assistive technology is provided to complete the education process to the fullest.

The official spokesman added that these centers are creating databases to count the numbers of people of determination on the university campus, with a classification of the type of their disability; establishing unified systems, procedures and policies to ensure adequate facilities for all students of the different faculties within each university; And the establishment of a department to follow up on students’ complaints within the centers for people of determination, in addition to communicating and coordinating with other campus units.

The sustainable model of Student Service Centers for Students of Determination designed by AMIDEAST is a central unit that serves and communicates with the entire university, and reports directly to the Vice President of the University. On-campus, awareness-raising and inclusion activities), and the establishment of these centers is part of the Public University Grants Program of the Higher Education Initiative (American - Egyptian), to serve the academic, physical and societal needs of students of determination on campus, and to promote equality among them in accessing higher education within the university. Universities.

It is worth noting that the fifteen universities have applied for the program, and were selected through a transparent and fair selection process; Based on standard criteria, the universities applying for the program have demonstrated the ability and commitment to continuous support for the integration of students of determination into the university community, where the establishment of service centers for students of determination comes as an extension to the five centers that already exist in each of the universities (Cairo, Ain Shams, Alexandria, Assiut, Mansoura), and these five centers regularly provided services to an increasing number each year (about 4,500 students of determination during the past year), and the centers raised awareness of the rights of people with special abilities, and supported universities in adhering to the implementation of the Disability Law of 2018, and the centers also contributed to the development of a plan for the development of university buildings to facilitate their movement within the university campus. The centers are also working to increase awareness of the use of assistive tools, and thus reduce obstacles that hinder the student from practicing his educational university life. The government university grant program for the Higher Education Initiative was also presented. (American-Egyptian) About 673 scholarships for talented young Egyptians from the twenty-seven governorates in Egypt, including 44 people of determination to prepare them for the labor market.

As for AMIDEAST, it will support staff building, assist, and supervise the implementation and management of the Student Service Center model for Students with Disabilities. The trainings include training in Egypt and the United States in a 10-day study tour with an American university. AMIDEAST will also equip the centers with furniture and purchase assistive technology. and provide training in its use.

AMIDEAST is the leading American non-profit organization specializing in international education, training, and development in the Middle East and North Africa, serving nearly half a million people annually, and has been working continuously in Egypt for more than 60 years to expand educational opportunities.