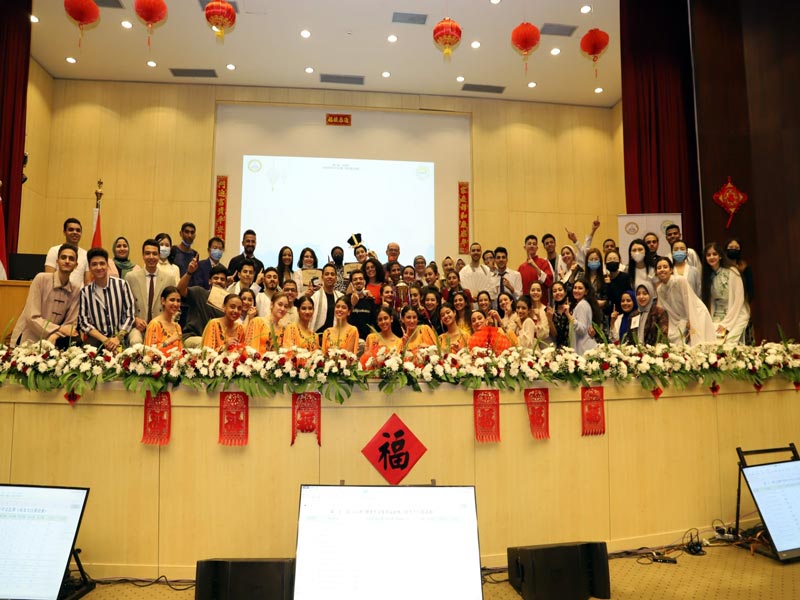 Under the auspices of Prof. Dr. Mahmoud El-Metini, President of Ain Shams University, concluded the activities of the twenty-first session of the international competition "Bridge of the Chinese Language", which was organized this year by Ain Shams University in the presence of Prof. Dr. Ayman Saleh, Vice President for Postgraduate Studies and Research, and Prof. Dr. Esraa Abdel Sayed, director of the Confucius Institute at the university and general supervisor of the competition, Mr. Wang Changgang, Minister Plenipotentiary for Education at the Embassy of the People's Republic of China in Cairo, and a group of professors and heads of Chinese language departments in Egyptian universities and institutes.

In his speech, Prof. Dr. Ayman Saleh said that Egypt has historically been a melting pot of all civilizations, which reflects the greatness of the Egyptian civilization, and added that Ain Shams University has a long history of joint cooperation with educational institutions in the People's Republic of China, pointing out that Ain Shams University hosts the Confucius Institute and the Silk Road Studies and Research Institute, which is The first of its kind in Egypt and the Middle East.

During the speech delivered by Mr. Wang Changgang, he praised the depth of Egyptian-Chinese relations, stressing that the Egyptian government attaches great importance to China in the various fields of education and training, and that Egypt has been keen to expand the base of Chinese education in primary and secondary schools and soon in middle schools, where the Chinese language has been introduced. In 12 Egyptian schools so far, in addition to expanding the establishment of Chinese language departments in Egyptian universities and institutes.

He addressed his speech to the young people participating in the competition to benefit from this unique experience that qualifies them to be ambassadors within their country for the Chinese language, culture and civilization, and to work to promote the exchange of cultures and open up broader horizons for communication with the world.

He valued the efforts of the Ain Shams University administration, represented by the Confucius Institute, in organizing the current session of the competition, some of which were held online and others by direct meeting due to the global health conditions imposed by the pandemic. He also thanked all the participants, trainers and experts from the various universities participating in the competition, as well as the jury for their efforts in making this important international competition a success.

Prof. Dr. Esraa Abdel Sayed explained that this international competition is organized by Ain Shams University under the auspices of the Chinese government represented by the Embassy of the People’s Republic of China in Cairo, pointing out that the competition witnessed the participation of 23 contestants representing 18 Egyptian universities. Ain Shams, Cairo, Luxor, Beni Suef, Suez Canal, International Institute for Languages ​​and Translation.

The events included the contestants reviewing their performances in Chinese, followed by the announcement of the jury headed by Prof. Dr. Nahla Ghareeb, Emeritus Professor in the Department of Chinese Language at the Faculty of Al-Alsun, Ain Shams University, Vice Dean of the Faculty of Al-Alsun, former head of the Chinese Language Department, and membership of international arbitrators and experts from the People’s Republic of China for the names of the winning students, as follows:

The winners of the first place and the distinguished center will have the opportunity to escalate the international competition with the participation of contestants from different countries of the world, which is scheduled to be held in the Chinese capital, Beijing, early next summer.