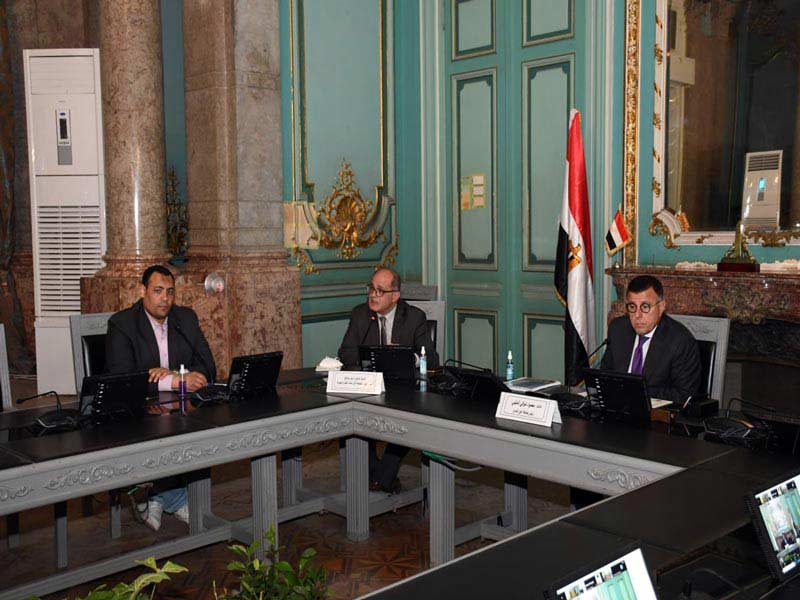 Within the framework of Ain Shams University's keenness to communicate permanently with all faculty members sent in various countries of the world, Prof. Dr. Mahmoud El-Metini, President of the University, held an expanded meeting via zoom technology with faculty staff who are sent from the university in more than 20 countries around the world, in the presence of Prof. Dr. Mohamed Ayman Saleh, Vice President of Graduate Studies and Research Affairs, and Dr. Abdullah Sami, General Supervisor of the Scholarships Welfare Office at the university.

During his speech, Prof. Dr. Mahmoud El-Metini affirmed the university administration's keenness to constantly reassure their conditions and open channels of direct communication with them, congratulating them on the blessed month of Ramadan.

Prof. Dr. Mahmoud El-Metini indicated the university administration’s keenness to keep them informed on a permanent and continuous basis of all the latest developments in the university in terms of development, modernization, and international and regional cooperation, as well as all efforts made to mechanize the university in order to achieve the creation of a stimulating and productive academic and research work environment comparable to the major universities and international institutes in which they are currently studying, pointing out that the aim is to motivate them to return to their mother country with new and innovative ideas and visions that add to the university and the Egyptian state as a whole and benefit the knowledge economy system.

He stressed the importance of their return with all that is new and developed to serve the specializations in the faculties and departments to which they belong, and he reviewed the efforts of Ain Shams University to achieve the university's vision that aligns with the vision of the Egyptian state in effectively contributing and participating in building a strong national economy based on knowledge and achieving comprehensive sustainable development.

He also discussed the various measures taken by the university in light of the increasing competition for world universities in pursuit of excellence and leadership, including the establishment of an alumni association, an employment office, and a center for innovation and entrepreneurship, he also addressed the concept of scientific circles that bring together the different faculties of the university to increase opportunities for cooperation between the different faculties in the same specialization.

He concluded his speech with the great development witnessed by the university's classification at the international level, in order to achieve the vision of the university administration in the past two years.

Prof. Dr. Mohamed Ayman Saleh, Vice President of the University for Graduate Studies and Research Affairs, explained a number of different services provided by the graduate studies sector to researchers, in terms of international publication rewards, ways to support projects, including projects funded by European bodies, linking the activities of the delegates abroad with the activities of the university inside the country, including It achieves serving the local community and highlighting the university’s global role in the field of education and scientific research.

He also highlighted the role played by the University's Scholarships Welfare Office to provide all means of support and care necessary for the university's children studying abroad as a top priority.

He expressed the university’s administration’s hope to achieve the future prospects of the university’s leadership internationally through its aspiring achievements and bids, which would have a great impact on its internal and external surroundings.

On his part, Dr. Abdullah Sami, General Supervisor of the Scholarships Welfare Office on the various activities carried out by the office, which the university attaches great importance to taking care of the scholars abroad, then he presented a group of scholars to present their various proposals to the university, in which Prof. Mahmoud El-Metini and Prof. Dr. Mohamed Ayman Saleh discussed ways applied within the university.

The scholars discussions dealt with proposals dealing with several aspects, including infrastructure development, rehabilitating the university’s administrative structure, adding distinctive programs that meet the requirements of the labor market, comply with the needs of community members and achieve qualitative advantage, automating some administrative procedures within the university, participating in experiments with leading international universities In various fields, summer schools, establishing service units for scientific research within the university, and many other proposals that were discussed during the meeting, and the university is already striving to achieve them in light of the university’s pursuit of academic and scientific cooperation with distinguished international universities.

The meeting lasted for two hours, and at the end of the meeting, the scholar expressed their happiness that such meetings are held regularly.