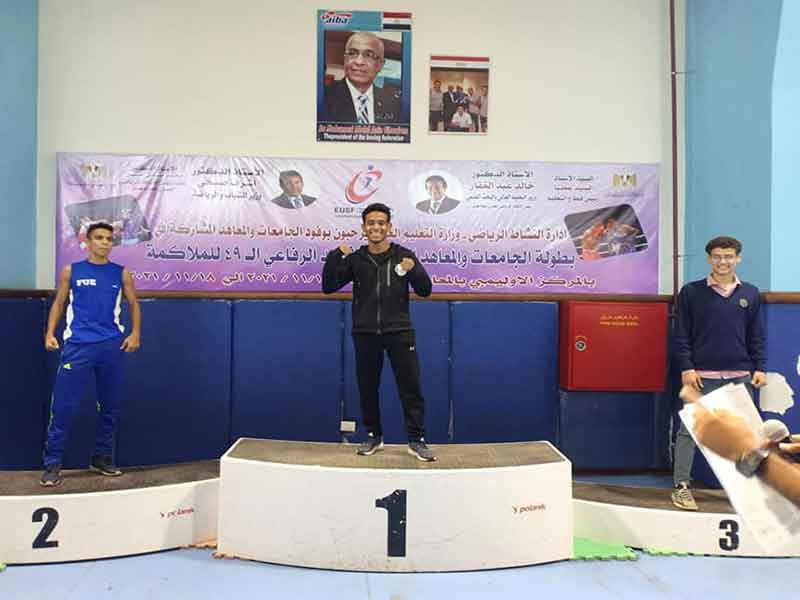 The player Ibrahim Mohamed Ibrahim, the student of the third year at the Faculty of Business, Ain Shams University, won the first place and the gold medal in the Egyptian Universities and Institutes Championship, the 49th “Martyr Al-Rifai” boxing session, which was held in the Olympic Center, under the auspices of Prof. Dr. Khaled Abdel Ghaffar, Minister of Higher Education and Scientific Research, and Dr. Ashraf Sobhi, Minister of Youth and Sports.

The participation of Ain Shams University in the boxing championship came with nine players, under the auspices of Prof. Dr. Mahmoud El-Metini, President of the University and Prof. Dr. Abdel Fattah Saoud, Vice President for Education and Student Affairs.

More than 26 Egyptian universities and institutes competed in the tournament from 15 to 18 November, and this session has strong competition due to the participation of elite players who have a global rating.

It is worth noting that the player Ibrahim Mohamed Ibrahim defeated his counterpart from the Future University by knockout in the first round.

Prof. Dr. Abdel-Fattah Saoud expressed his pride and happiness in the player's achievement, stressing his full support for all his talented and creative students in various fields and activities and providing the necessary training for them to appear in a proper way to represent Ain Shams University in various forums inside and outside Egypt.

It is noteworthy that the university's boxing team participates in the tournament under the supervision of Mr. Muhammad Al-Khatib, Assistant Secretary for Education and Student Affairs, Mr. Muhammad Al-Sharkawy, Director General of the General Administration of Youth Welfare, Mr. Mohamed Hassan, Director of the Sports Activity Department, and Captain Fatima Khalifa, the administrative supervisor of the university’s boxing team.