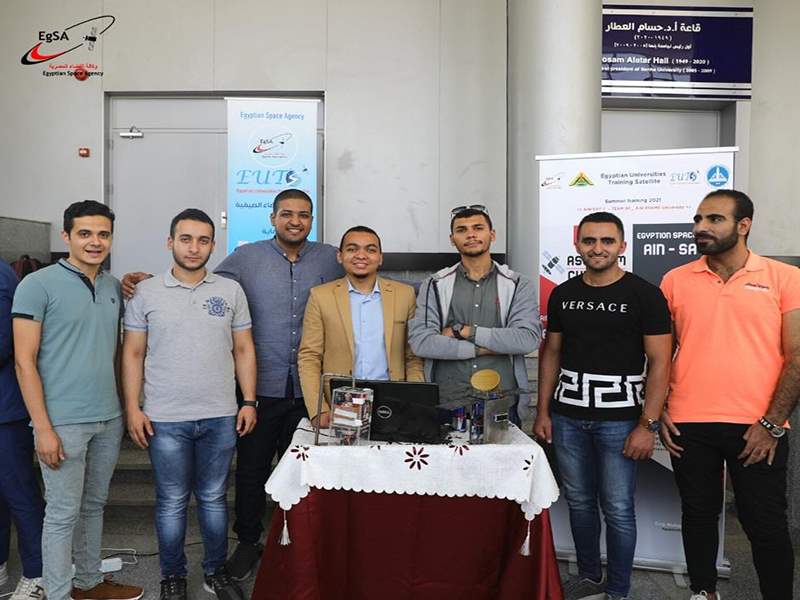 Under the auspices of Prof. Dr. Mahmoud El-Metini, President of Ain Shams University, and Prof. Dr. Abdel Fattah Saoud, Vice President for Education and Student Affairs, and Prof. Dr. Omar Al-Husseini, Dean of the Faculty of Engineering and Prof. Dr. Mostafa Refaat, Vice Dean of the Faculty of Engineering for Education and Student Affairs, the Egyptian Space Agency witnessed the closing ceremony of the summer training activities for students of the Egyptian Universities Moon Project on Wednesday, 3/11/2021, in the presence of the CEO of the Egyptian Space Agency.

Many outputs were achieved during the training period, through which the students succeeded in addressing many aspects in the fields of space science and technology, operating stations, software and studies in the space field. The CEO of the Egyptian Space Agency, Dr. Muhammad Al-Qousi to the success in coordination and cooperation with universities, which resulted in the manufacture of the first satellite for Egyptian universities, entirely in Egyptian hands, which is scheduled to be launched next year, God willing.

It is worth noting that the top ten students were honored, and they won first place (Ain Shams University Engineering) for the Department of Power Mechanics and Mechatronics in the fourth year, and they are:

On the sidelines of the exhibition, outstanding student projects were presented, which were praised by everyone for their uniqueness and uniqueness.

It is noteworthy that the Egyptian Space Agency aims to create and transfer space technology sciences, to localize and develop them, and to possess self-capacity for building and launching satellites from Egyptian territory.