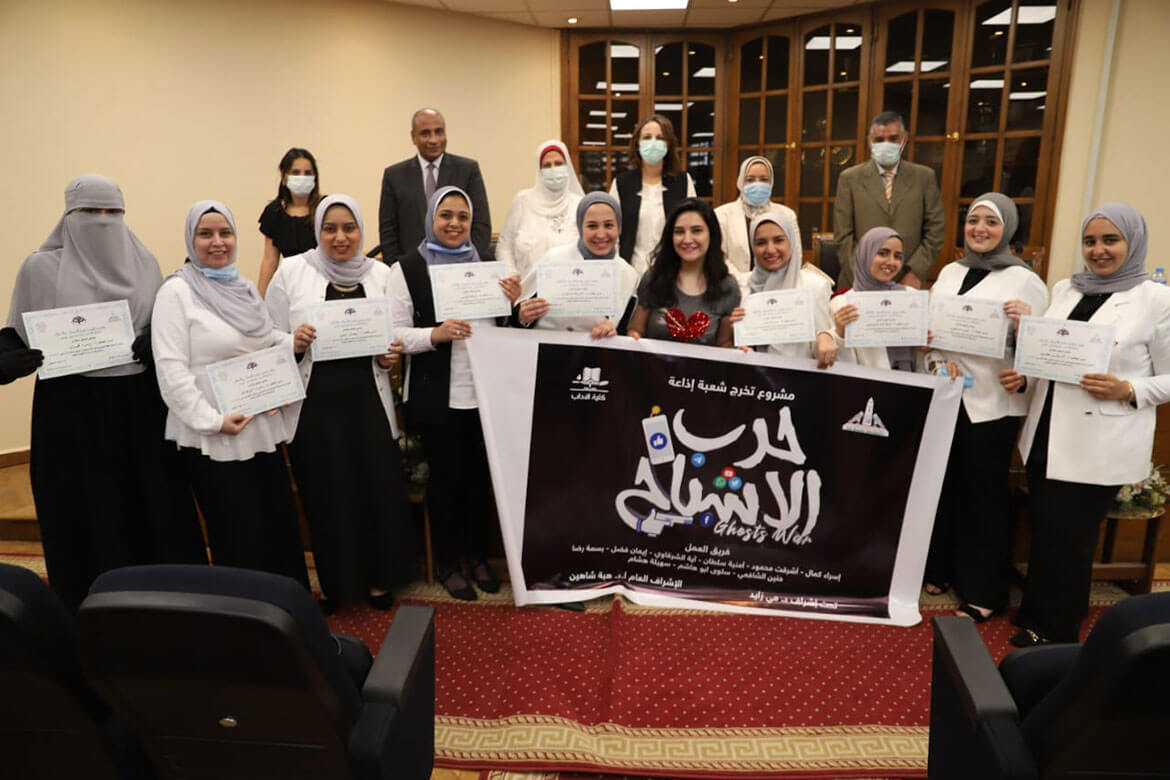 The Department of Communication and Media Sciences, Faculty of Arts, Ain Shams University, headed by Prof. Dr. Heba Shaheen, a distinguished elite of specialists in the field of radio, to judge the graduation projects of the fourth-year students of the class of 2021, under the auspices of Prof. Dr. Mahmoud El-Metini, President of the University, Prof. Dr. Abdel Fattah Saud, Vice President for Education and Student Affairs, Prof. Dr. Mustafa Mortada, Dean of the Facuty.

Dr. Heba Shaheen emphasized the distinction of the ideas of the two graduation projects for students in the field of radio, noting that the Department of Communication and Media Sciences at Ain Shams University confirms its merit every year with the efficiency of its students and graduates through their participation in media forums and their obtaining the first positions in media production of various types.

Ms. Nagwan Kadri, former radio head, expressed her happiness with the quality of the distinguished programs, stressing that radio is the future for easy listening anywhere, and as a strong competitor to other media.

Dr. Hassan Madani, head of the former General Program Network and the former Noble Qur’an Network, said that the radio station faced many difficulties, but it overcame them, as it was imagination and suspense, explaining that he enjoyed the two programs presented a lot.

Mr. Morsi Abdel Alim, senior program presenter at the Youth and Sports Network, said that the Media Department at Ain Shams University is always distinguished by presenting different and distinct ideas and talents.

Dr. explained. Manal Al Aref, senior program presenter at the Voice of the Arabs Network, said that the two projects include a group of students who overcame difficulties and chose the field of radio, saluting them.

The jury evaluated the first two radio programs entitled (War of Ghosts), which deals with fourth and fifth generation wars as not traditional wars, but rather fighting minds and targeting society, reviewing the history of wars from the first to fifth generation through proxy war and meetings with Major General Staff of war Dr. Samir Farag and the media Mohamed El Gheity.

While the program (Khatwa Aziza) dealt with the month of Ramadan and its most important features and prayers of Sheikh Al-Naqshbandi, the history of the profession of Al-Masharati and the dishes that characterize it, the tables of Rahman, the Iftar cannon, the lantern and how it began, as well as the most famous songs of the holy month, with an audio performance by the great artist Salah Abdullah.

At the conclusion of the discussion, the jury announced that the “Ghost Wars” program won the first place, and the “Khatwa Aziza” program came in second place.