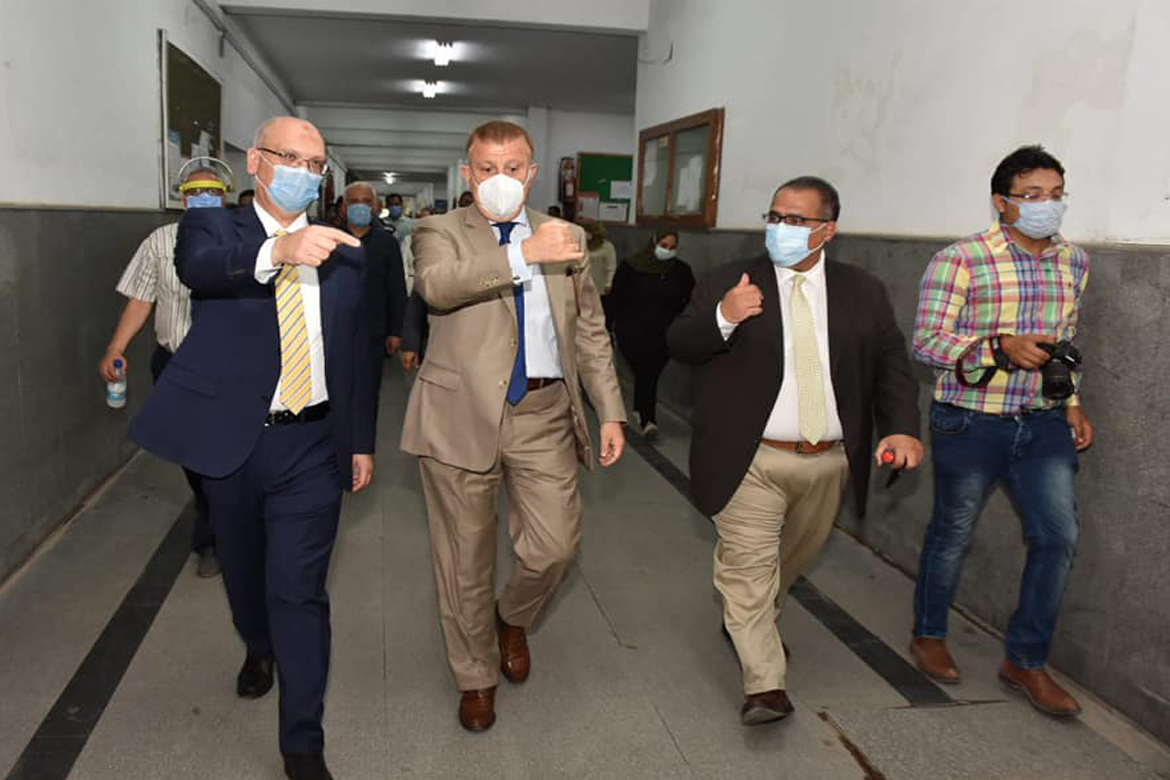 Prof. Dr. Mahmoud El-Metini, President of Ain Shams University and Prof. Dr. Abdel-Fattah Saud, Vice President of the University for Education and Student Affairs, conducted an inspection tour of the conduct of examinations work at the Faculties of Business and Arts, accompanied by each of the Prof. Dr. Khaled Kadri, Dean of the Faculty of Business and Prof. Mustafa Mortada, Dean of the Faculty of Arts and the agents of the two faculties.

During the tour, Dr. El-Metini said that exams are held for final years students in unusual circumstances and amid unprecedented challenges in light of the Corona pandemic, stressing that this delicate circumstance opened the way for new mechanisms and features that were not sufficiently exploited before, in the forefront of which are distance learning e-learning systems .

He added that the university prepared to implement all preventive and precautionary measures to ensure the safety of students and the continuation of the examinations work without any obstacles, praising the efforts of Ain Shams University Hospitals and the General Administration of Medical Affairs in this regard.

Prof. Dr. Abdel-Fattah Saud stated that the university administration, during its setting of schedules, took into account the time sequence in starting the exams for the various faculties of the university to prevent gatherings between students and allocating two hours separation between each exam period and another to sterilize all committees and corridors.

He stressed that if any student is suspected to be injured, he will be transported immediately by an ambulance to the Student Hospital for a smear and be isolated until the result of the analysis appears.

He added that places have been provided for the residence of expatriate students in university cities, taking into account all necessary preventive measures, pointing out that committees for people with special needs have been equipped with all the necessary equipment for them, with allocation of corridors for their entry and exit for exam committees easily and conveniently.

Prof. Dr. Khaled Kadri indicated that the faculty has 73 thousand students, including 15 thousand students in the final year distributed on Arabic, English, French, credit hours and integrated e-learning programs, explaining that there are 4 exam periods every day from nine in the morning until six in the evening Each committee should include only 10 students.

He added that the exams have been prepared throughout the past period, through videotaped lectures by the faculty members, which amounted to about 2000 lectures, including 500 interactive lectures, which were raised on the college’s educational channel, and tables and seating numbers were announced electronically, along with the curricula and courses that will Students studied it, which greatly contributed to the fluidity and regularity of the movement, as each student became aware of the location of his committee and how to reach it.

On the precautionary measures taken by the college, he pointed out that the college has made 3 entry gates, 6 exit gates, in addition to defining 3 directions for students to walk with the presence of ground signs to maintain the distances between students.

Prof. Dr. Mustafa Mortada explained that the committees were divided into 4 periods from 9 in the morning until 5 in the evening. The duration of each committee is one hour and a half between them, one and a half hours apart for students to exit and complete the sterilization process between each committee, in addition to the spacing mechanisms, as well as providing the necessary ventilation and means of sterilization.

Regarding the examination system, he indicated that the exams are a multiple-choice system, indicating that the university administration has provided funds for students to place the answer paper in. In addition to doubling the number of committee rooms to 50 committees.