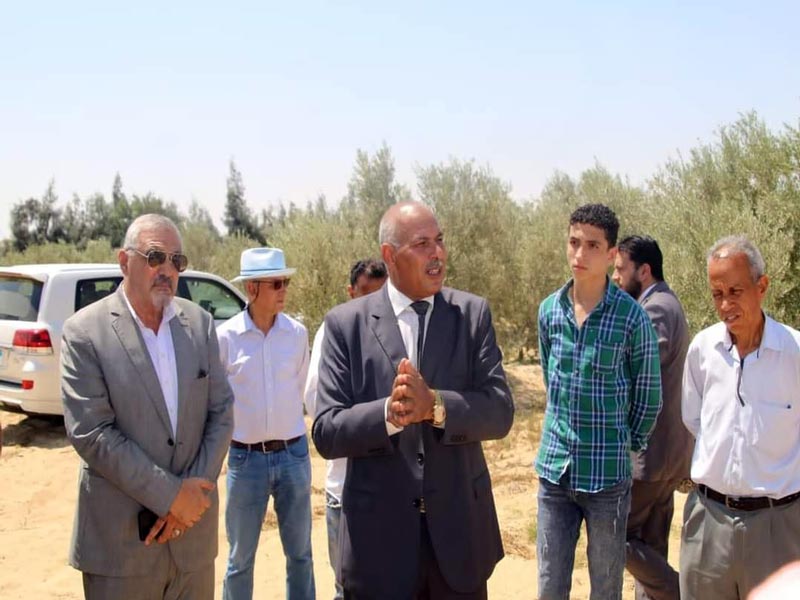 In an expanded Arab meeting, a group of researchers, academics, investors and official officials, including a high-ranking delegation of Ain Shams University professors, met in conjunction with the beginning of the jojoba harvest season for the lands of the Egyptian Gulf Company for Desert Land Reclamation MK Jojoba in the Wadi Al-Natroun region to prove the Egyptian Gulf once again the extent of the credibility of the Egyptian Gulf What it presented of the characteristics and specifications of the strains of jojoba seedlings produced in the company’s nurseries, and that the harvest that was collected in the presence of everyone and was weighed and estimated the general average production per feddan proved that the feddan of jojoba in the third year its production exceeded two hundred kilograms and it surpassed the estimated studies expected by the company’s advisory board team Thanks to the great efforts and technical support programs of appropriate nutrition and irrigation for each region and under different environmental conditions, despite the salinity degree in the first field exceeding 6200 ppm.

Engineer Ismail Mohamed and the executive and advisory body of the company received a high-level delegation of Ain Shams University professors representing all the university’s faculties. The fields of agriculture, medicine, pesticide production, animal, bird and fish feed.

Prof. Dr. Magdi Mallouk, the company’s senior advisor, also stated that the Egyptian Gulf succeeded in localizing jojoba in Egypt and the Middle East, and the environmental assessment studies proved the importance of jojoba in balancing the carbon equation in the world and treating the problems of global warming that preoccupied the world with issues of climate change in addition to being a return-on An excellent economist that qualifies it to compete in the field of investment in the cultivation of dry and arid lands, as Dr. Molouk on the success of jojoba in reconsidering the optimal economic operation of sewage plants, talking about the project to cultivate the lands surrounding the sewage plant in Hurghada, Red Sea Governorate, in cooperation with the Upper Egypt Development Authority, where the cultivation of about 1,000 acres was implemented in the first phase, and preparations are underway to implement the second phase with an area of ​​about two thousand acres To make the sewage station a model for green dealing with the environment, transforming these stations into projects with economic returns, and opening the way towards implementing such a model in Egypt and the Arab countries.

With the same words of determination and emphasis on moving forward in the development of research and scientific relations with the Agricultural Research Center, Prof. Dr. Mohamed Abdel Shakour, professor at the Horticultural Research Institute and head of the delegation, spoke that what we witnessed on the day of the national harvest of jojoba exceeded all expectations and that it was encouraging and inspiring researchers to make more efforts to continue the success of These are the great and honorable efforts of the Egyptian Gulf.

The meeting was also witnessed by Dr. Muhammad Abdullah, on behalf of His Excellency Dr. Nasr El-Din El-Obeid, Director-General of the Arab Center for Dry Areas and Dry Lands - ACSAD - the League of Arab States. Arabic.

The delegation of the Kingdom of Saudi Arabia was keen to witness the Egyptian success in the production of jojoba, as His Highness the Crown Prince aspires to achieve the Green Middle East initiative and spread the cultivation of jojoba, which invited the delegation of King Faisal University to attend the National Day of Jojoba in Egypt. Eng. Amr Makkawi, Assistant CEO of Wadi Company, participated Al-Ahsa Investment and Prof. Dr. Mohieldin Suleiman, Professor at King Faisal University.

The meeting was also attended by a delegation from Libya, representing Prof. Dr. Ahmed Al-Sawy Al-Sharif, head of the Libyan Renewable Energy and Environment Organization, which is looking to implement a project to plant one million hectares of jojoba in ten states at a rate of one hundred thousand hectares for each state, with the aim of establishing productive urban communities in the Libyan deserts in the southern regions. A Cooperation protocol was signed with the Egyptian Gulf in this regard.

After the meeting, Dr. Essam El-Gamal, Chairman of Al-Badia Investment Group, and Dr. Mohamed Abdel-Karim, President of Trust Group, a strategic ally with the Egyptian Gulf, which was called the MBT Alliance, stated that the Egyptian-Gulf efforts in cultivating jojoba and producing distinct strains and seedlings have a great impact and encouragement to pump more investments in this field. And that the movement of researchers from Egyptian universities and research centers calls for optimism in the progress of industries based on jojoba oil and to provide global markets for jojoba products in various fields to achieve stability in agricultural investment in desert lands.