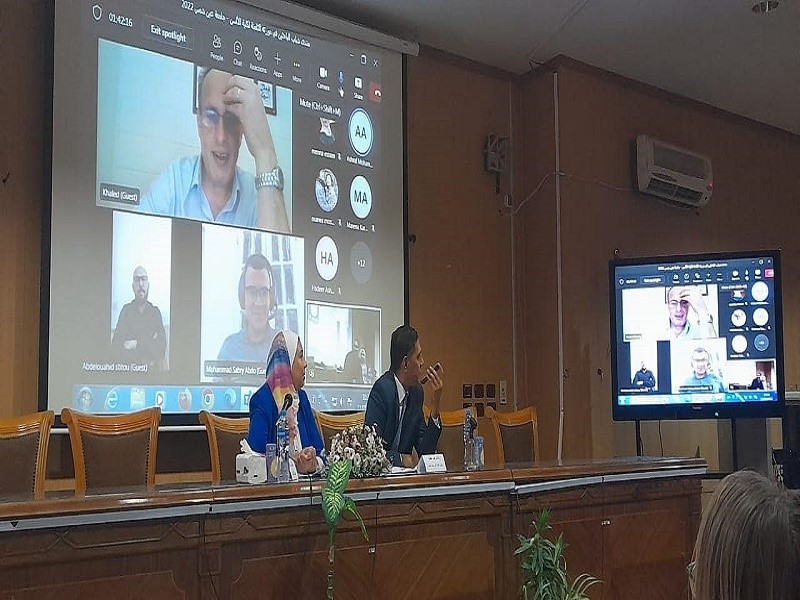 Prof. Dr. Salwa Rashad, Dean of the Faculty of Al-Alsun at Ain Shams University, a forum for young researchers entitled "Humanitarian Approach and Digitization between theory and practice", under the auspices of Prof. Dr. Mahmoud El-Metini, President of the University, Prof. Dr. Ayman Saleh, Vice President for Graduate Studies and Research Affairs, and supervised by Prof. Dr. Ashraf Attia, Vice Dean for Graduate Studies and Research Affairs, with the participation of 22 researchers from various Egyptian universities, and this year the forum will host Moroccan novelist Abdel Wahed Estito, one of the pioneers of digital literature in the Arab world, and Dr. Khaled Al-Ghamry, Professor of Computational Linguistics at Ain Shams University, one of the founders of the "Arab Content Monitor on the Internet" of the "Arab Thought Foundation"

During her opening speech, she confirmed that the forum is knocking on the doors of the future in line with Egypt's 2030 vision and the principles of sustainable development to achieve digital transformation and build a digital Egypt, and in the context of the consistency of the strategic goals of Ain Shams University and the Faculty of Al-Alsun, which include achieving excellence in scientific research and supporting innovation. The Faculty has recently taken it to develop its graduate and undergraduate study programs, including the preparation of an interdisciplinary graduate program that integrates the translation specialization with computer science, which was activated last year 2021, and aims to train students to use the latest software in translation project management, multimedia translation, localization translation and addressing problems Translation and enriching the scientific research movement in the field of technology employment.

She continued, stressing that the forum's activities address the topic of the age and seek to provide answers to important questions for the future of digitization in the field of human sciences, and how the mechanisms of the human element will be consolidated with electronic in the future.

On his part, Prof. Dr. Ashraf Attia, Vice Dean for Graduate Studies, said that the Faculty of Al-Alsun has been keeping abreast of developments and innovations in language studies, literature and translation, and informing its researchers and scholars about new ideas and research paths. Language, literature and translation away from the circle of stereotyping and repetition, and linking these studies with technological applications to achieve integration between different disciplines. Thus, the Faculty Al-Alsun maintains its leadership in the humanities sector in terms of preparing cadres capable of using and developing technology.

Through video conference technology, Dr. Khaled Al-Ghamry, Professor of Computational Linguistics at Ain Shams University, one of the founders of the “Arab Content Observatory on the Internet” affiliated with the “Arab Thought Foundation”, the topic of the conference, stressing that it is of great importance, and he continued, noting that cultural computing is one of the most important topics raised in The scientist, and talked about the extent to which human creativity can be digitized or measured digitally, stressing that it will be the consolidation of boundaries and the distribution of roles between the human element and the electronic factor.

He reviewed the history of the emergence of the digitization of linguistic dictionaries since the beginning of the spread of Islam and the entry of non-Arabs into the Arabic language and the issuance of books and dictionaries to preserve and develop linguistic themes to keep pace with the successive developments over the ages, stressing that the use of digitization began several centuries ago and witnessed many developments until it reached the form today's advanced technology using computers.

He added that with the advent of the use of computers, they were used in the fields of humanities, digital libraries appeared, and text descriptions between different universities were converted into electronic paper to give researchers wider areas of cooperation.

He emphasized that digitization cannot measure creativity, all that can be measured is not creativity. Creativity is researching what we could not reach, because creativity knows no bounds and its results are not measured.

While the Moroccan novelist Abdel Wahed Estito, one of the pioneers of digital literature in the Arab world, stressed that writing a novel is an adventure in itself, so the writer is facing a challenge since his decision to write a novel. Can it be an interactive novel with the audience, and he reviewed his experience of writing an interactive novel via the Facebook platform and there were reasons that prompted him to write on Facebook, including the presence of followers on the page and they interact directly, so Facebook allows direct interaction with readers.

He reviewed his first experience of writing a novel on Facebook and publishing the chapters sequentially as soon as they were completed on an almost daily basis, and delaying chapters bore the followers, pointing out that rapid publishing necessitates the use of a quick and easy partial method to give the reader an opportunity that was not present in the classic novel, such as determining the fate of a character in the novel and vote from the public on upcoming events.