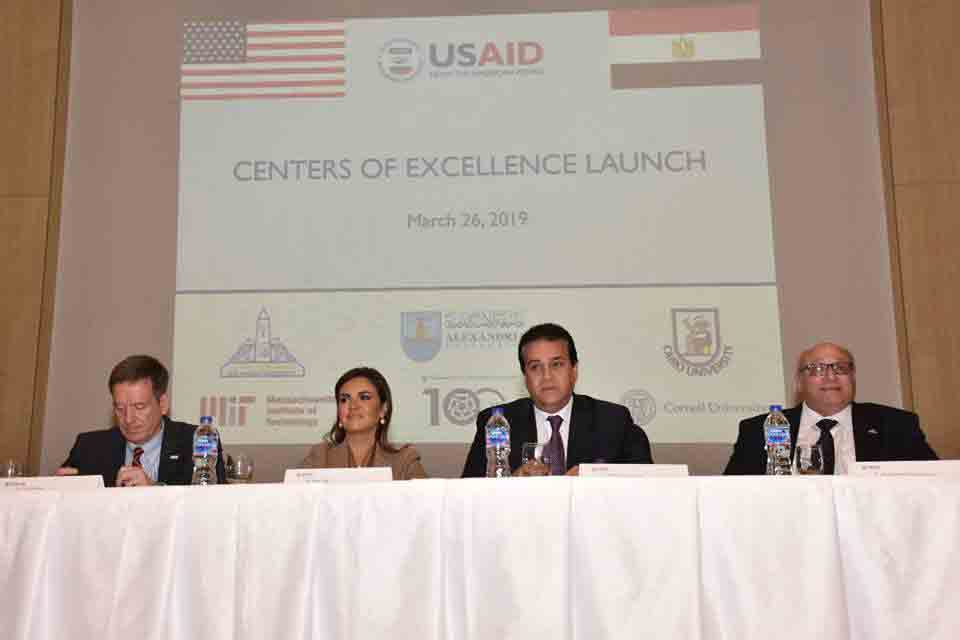 Prof. Dr. Khalid Abdul Ghaffar, Minister of Higher Education and Scientific Research, and Dr. Sahar Nasr, Minister of Investment and International Cooperation inaugurated the ceremony organized by the Faculty of Engineering, in the presence of the President of the University. The celebration was attended by a number of representatives of American institutions and universities, advisers of the Minister of Higher Education, a number of deans and agents of various faculties at Ain Shams University, and representatives of the Egyptian universities participating in the project.

During his opening speech, Prof. Dr. Khalid Abdul Ghafar said that the current international partnerships with a number of international organizations and bodies in the field of higher education and scientific research are supporting the vision strategy of Egypt 2030.

He added that the coordination and partnership between a number of Egyptian universities represented at the universities of Ain Shams, Cairo and Alexandria and USAID promotes sustainable development efforts in Egypt, especially in three vital projects, Energy and Water. He pointed that linking scientific research with development needs has become the only way to stimulate economic growth and find solutions to the challenges of development in Egypt.

Dr. Sahar Nasr praised the efforts of the Ministry of Higher Education and Scientific Research to open the horizons of international cooperation with various countries in the world, especially the United States of America, with which Egypt has long and strong relations and ties.

She pointed out that education in Egypt is witnessing a qualitative leap based on investing in the human element, expressing the hope that this partnership will achieve positive outcomes that will benefit the future of Egyptian youth from university students and open a path for excellence in the local and international labor market.

Prof. Dr. Abdul Wahab Ezzat, President of Ain Shams University, stressed the importance of cooperation between USAID and the Ministry of Higher Education and Scientific Research and the Egyptian universities, which will enhance the capacity of higher education institutions in Egypt.

Mr. Mark Green, President of the US Agency for International Development (USAID), said that this partnership reflects the warm and genuine friendship between Egypt and the United States of America for a brighter future. It also allows Egypt to take the prestigious position it deserves among the countries of the world.