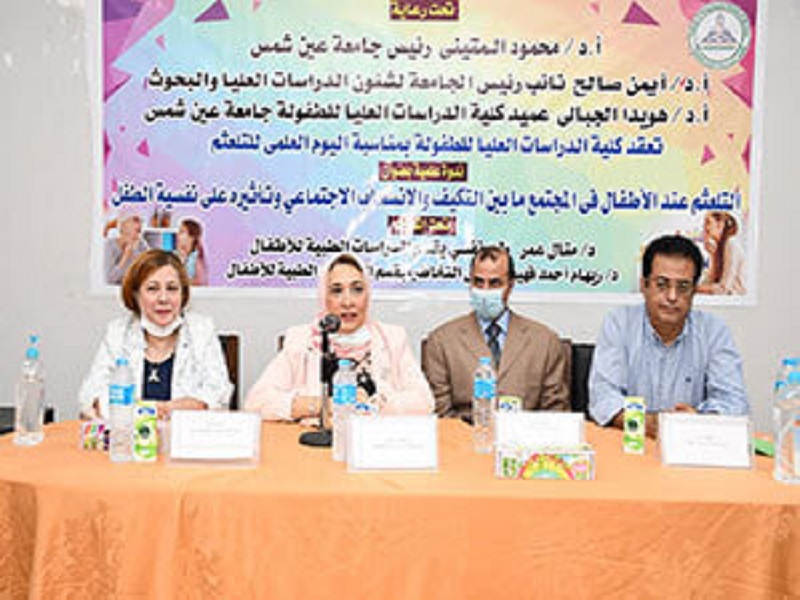 The Faculty of Graduate Studies for Childhood at Ain Shams University organized a scientific seminar entitled "Stuttering in children in society between adaptation and social withdrawal and its impact on the psyche of the child", under the auspices of Prof. Dr. Mahmoud El-Metini, President of Ain Shams University and Prof. Dr. Ayman Saleh, Vice President for Graduate Studies and Research And Prof. Dr. Howaida Al-Gebali, Dean of the Faculty, and in the presence of Prof. Dr. Randa Kamal Abdel Raouf, Vice Dean for Community Service and Environmental Development, and Prof. Dr. Mohamed Behairy, Vice Dean for Graduate Studies and Research Affairs, and Prof. Dr. Ehab Eid, and under the supervision of Dr. Manal Omar, Psychiatrist, Department of Pediatric Medical Studies, and Dr. Reham Ahmed Fahim, Speech pathologist, Department of Pediatric Medical Studies.

In her speech, Prof. Howaida Al-Gebali welcomed the attendees, noting that the symposium comes on the International Stuttering Day, which falls on October 22 of each year.

Dr. Reham Ahmed Fahim explained that lack of verbal fluency is a stage that many children go through in the stage of language acquisition, meaning that there may be pauses or repetitions of one or more sounds or words while wanting to speak.

The reason for this is likely to be the burden that the child goes through during speech. Most children exceed this stage, but if these pauses and repetitions continue to appear until the age of 5 years or the severity and severity of the problem increases, these are signs of a real problem that requires consulting specialists and often intervention is made to solve This problem is after the age of 8 years.

She pointed out that the concept of stuttering means the occurrence of abnormal behavior during speech, such as pauses, repetitions or prolongations of one or more sounds or a word due to which the smooth flow of speech is interrupted, and this behavior usually draws the attention of others and causes psychological symptoms such as anxiety and sadness in the person who suffers from stuttering.

She added that it cannot be confirmed that there is a specific reason for the occurrence of “stuttering”, and the causes leading to stuttering cannot be limited, because each case may have different causes from other cases, but there are some reasons, including the organic causes that are summarized in the genetic factor, or The genetic predisposition to the child, and the psychological reasons, including low self-confidence, fear, anxiety, loss of sense of security, feelings of inferiority, introversion, and social reasons, including trying to show the person in a bad social situation, such as coercion and not allowing him to express himself as he wants or embarrassing him in situations It calls for talking about his divorce, or subjecting him to continuous bullying by his peers, or criticism of the father and mother and their abuse of the child if he makes a mistake in the expression.

On her part, Dr. Manal Omar referred to the scientific studies that linked social phobia and stuttering, which confirmed that they have the same origin, which indicates the association of social phobia with stuttering.

She also presented some research that confirms that mothers who suffer from social phobia disorder do not always require them to have children who stutter, while studies have confirmed that the aspect of education from the direction of the mother and father, excessive control or exaggerated pampering of the child, or the mother’s continuous criticism and reprimanding of her child may lead to the emergence and exacerbation of stuttering. She stressed the importance of directing counseling to the mothers and fathers of these children, and the intervention of several specialties, including speech and psychiatry, in addition to other specializations to treat this condition.