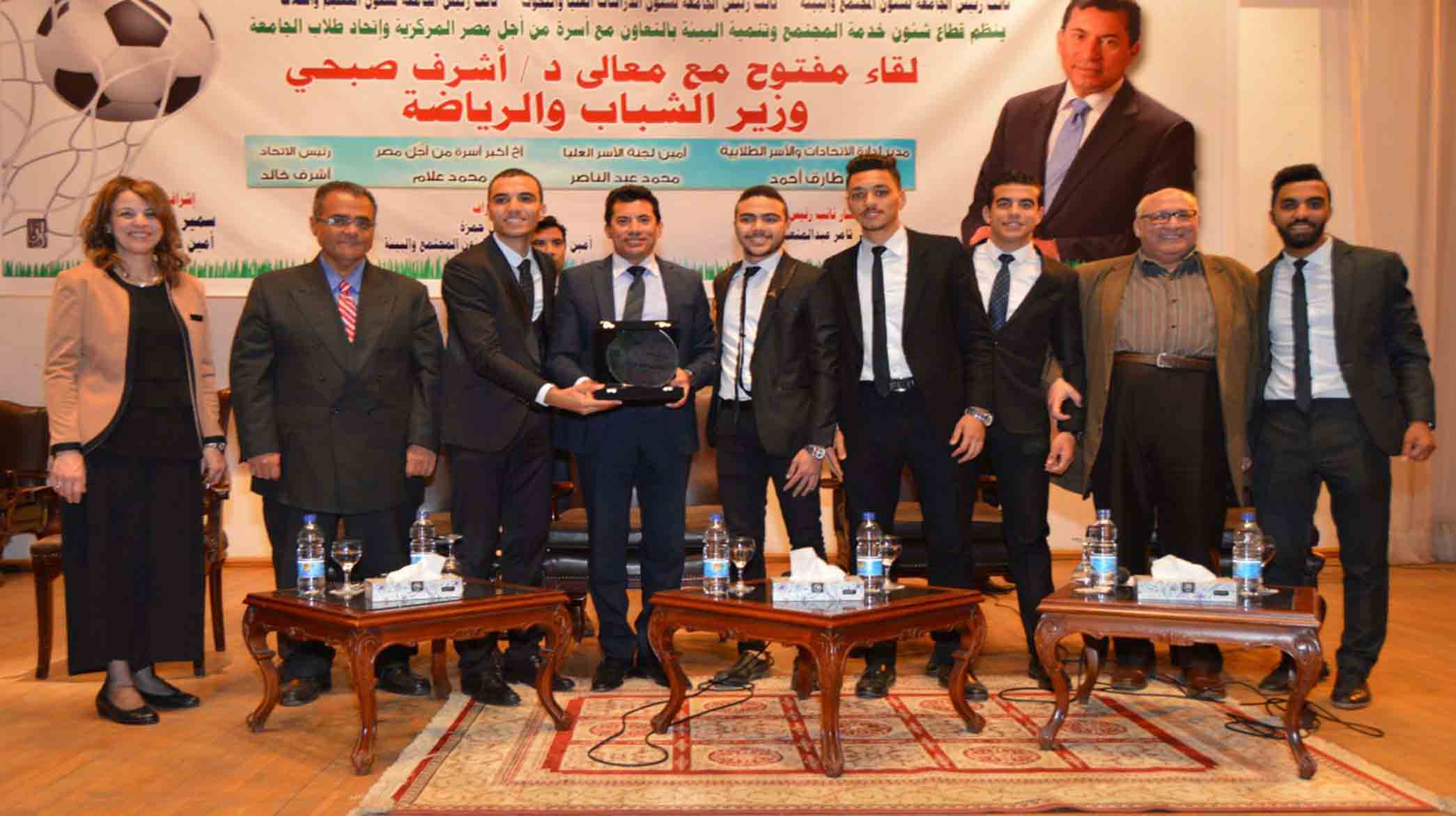 In an open dialogue between HE Minister of Youth and Sports Prof. Dr. Ashraf Sobhy and students of Ain Shams University in the presence of Prof. Dr. Abdul Wahab Ezzat, President of the University, Prof. Dr. Abdul Fattah Saud, Vice President for Education and Student Affairs, Mr. Sameer Abdel Nasser, Secretary General of the University, Prof. Dr. Heba Shaheen, Director of the Media Center, and a group of deans, vice-deans and professors of the university, organized by the community service sector and environment development, Prof. Dr. Ashraf Sobhy said that Egypt is witnessing a qualitative leap in its modern history in various fields, as well as a return to its leadership. In a short period, it hosted a number of international sports competitions, including the Mediterranean Swimming Championships held in Port Said and the Egypt International Taekwondo Championship, From 47 countries from around the world.

Pointing out that the ministry is particularly concerned with those with special abilities through the Sports Union for Intellectual Disabilities and the Paralympic Union, in addition to allocating a department in the ministry that cares about people with abilities and inspiration.

He also announced that the ministry will ensure the development of a number of stadiums, gymnasiums and running track in the university.

On the general league competition, he pointed out that the general league this season is the strongest league in several years because of the fierce competition, along with sponsorship contracts and the average price of players. He stressed that the intervention of the State represented in the Ministry of Youth is a balanced intervention with giving each official his full chance to shoulder his responsibilities.

Adding that the African Cup of Nations is a starting point for the return of the masses to the stadiums where tickets will be booked through the website pointing out that Egypt has young people, science, energies and constructions, which qualifies to host the tournament, which is watched by about 2 billion viewers around the world and produced it distinctly through organization, good preparation and outstanding public attendance.

At the end of the dialogue, Prof. Dr. Ashraf Sobhy advised students to look for strengths in themselves and work to develop their abilities and talents to form a strong personality successful and create a better future for them and our dear country Egypt.

During his speech, Prof. Dr. Abdul Wahab Ezzat stressed the importance of the role of sport in building a balanced personality, physically and psychologically sound, capable of understanding and assimilation in a new way that is not guided by destructive, false or extreme ideas. Sports also offers strong opportunities for developing abilities and skills and creating great champions who raise their country's name.

He also praised the sports development witnessed by Egypt in the current period and the efforts of the Ministry of Youth and Sports in supporting international forums and forums in various fields.

At the end of the meeting, Abdul Wahab Ezzat presented the Shield of the University to Prof. Dr. Ashraf Sobhy. The President of University Students Union and the eldest brother of the Central Egypt family and the President of the Union of Students of the Faculty of Specific Education gave the shield to the Minister of Youth and Sports.