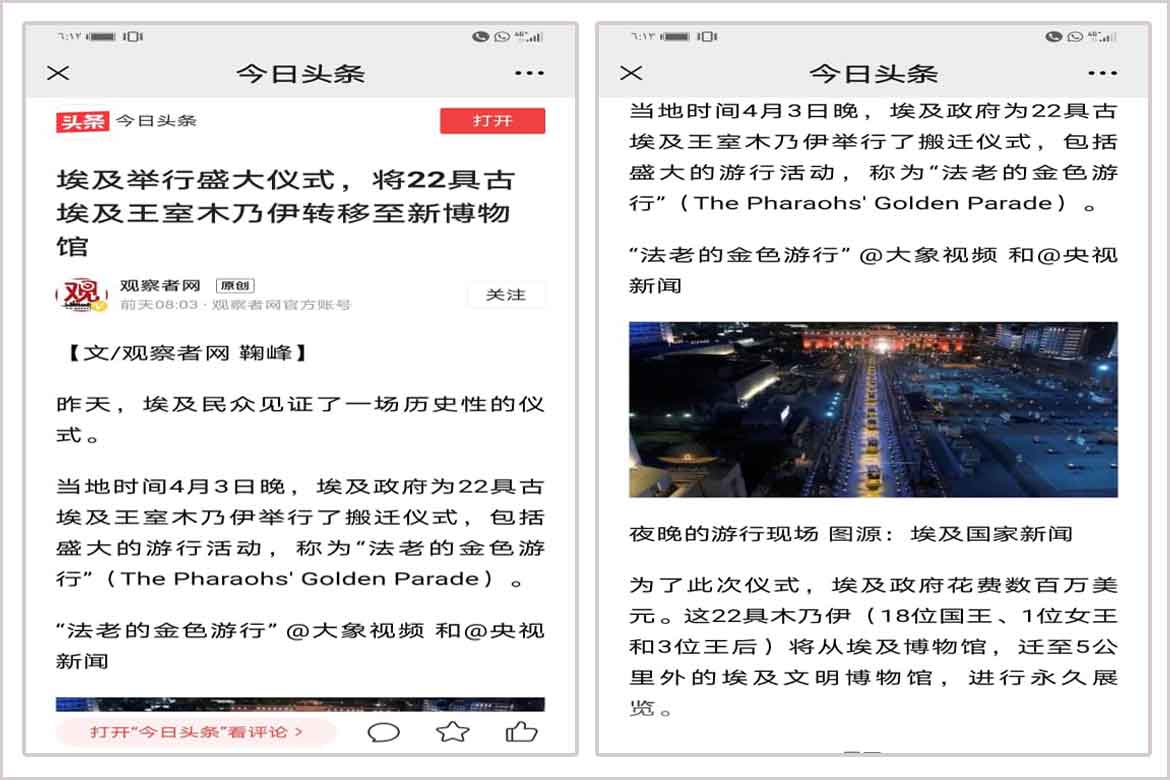 Confucius Center at Ain Shams University headed by Prof. Dr. Esraa Abdel Sayed translated what was published by Chinese newspapers about the great celebration held by Egypt and its people in front of the whole world to transfer the royal mummies from the Egyptian Museum to Tahrir to the National Museum of Civilization, Fustat.

On March 4, 2021, the whole world witnessed the ceremony of the procession of the transfer of royal mummies from the Egyptian Museum in Tahrir Square to the National Museum of Egyptian Civilization. The procession was named "The Golden Pharaoh's Parade", which included 22 mummies for 18 male and 4 female kings, transported on board Decorated carriages in the Pharaonic style bearing their names, where the procession and the ceremony are the most famous of the two major international addresses, and its ceremony was broadcast live on more than 400 Egyptian and international channels, and the Chinese websites and news agencies were not without news of coverage of this great event, and the summary video of the ceremony came on top of it. Completed, translated into Chinese, with a full explanation of the ceremony, its details and background, produced by the Chinese news agency Xinhua.

China's Deputy Ambassador to Egypt, Minister Plenipotentiary Xiao Jinheng, expressed his astonishment at the parade of royal mummies, describing it as "an unprecedented historical and global event."

Chinese media newspapers highlighted the event with headlines showing the significance of the event, detailing the event and the itinerary for transporting the 12 mummies.

Under comprehensive global media coverage, the Egyptian government carried out a ceremony on the evening of April 3, Cairo local time, to transfer the "Golden Pharaoh's Procession" and to display the mummies of 22 kings and queens. The procession traveled carrying the mummies of kings through the streets of Cairo from the Egyptian Museum in Tahrir Square to the National Museum of Egyptian Civilization the new"

On the day corresponding to April 4, the Chinese news agency Xinhua in Beijing, by correspondent (Yang Shuyi), reported the news with the title: Great News! 22 of the mummies of the ancient Egyptian pharaohs' kings and queens "travel in a group procession to the new museum."

The news also came in the Chinese Youth Daily under the title:

Egypt witnessed the transfer of the "Golden Pharaoh's Procession". The mummies were transported in a great procession and on royal boats in the Nile.

The news published headlines on the People's Daily website, under the title:

The "Golden Pharaoh's Parade" was launched in Egypt, and the New China News Agency published the news entitled: "Egypt evaluates a great ceremonial ceremony, which astonished the Egyptian Pharaohs and the world."

This is with regard to the most famous news sites and Chinese news agencies, as for the Chinese people, many of them expressed their great astonishment at the ceremony, and many Chinese shared pictures and videos and commented on them glorifying the splendor and beauty of the ceremony, and they admired the music, costumes, lights and the golden procession carriages, where many published On their personal pages, the event commented that it is a huge and wonderful celebration that is not less beautiful than the Olympic Games celebrations, but surpassed them, and dazzled the whole world, and many of them wished to visit the new museum immediately after the end of the Corona pandemic.

Here are some comments from the Chinese people on the event:

(Egypt is sweeping the headlines and tops the talk of social networking sites, 22 mummies are moving their home today from the Egyptian Museum to the National Museum of Civilization next to the pyramids, in a huge celebration that dominated the opening of the Olympic Games, so it is reasonable that the events that Egypt is going through recently, such as the incident of the Suez Canal Dam, all of them are the result of our astonishment at the ancient pharaohs ?!)

(I have previously visited the Egyptian Museum twice, and saw pictures of the new museum from a distance, that it is really great and majestic, I must go to visit it after the end of the Corona virus pandemic)

(Tonight, all eyes of the world will be on Egypt)

(Simply "they are the Egyptians")

(The Golden Parade of Mummies was successfully transported to the New Museum, in a ceremony surpassed in glory by the Olympic Games opening ceremonies)

(The golden procession to transport the kings of Umm Al-Dunya, 18 mummies for kings and 4 mummies for queens, transferred from the Egyptian Museum to the new museum near Giza.)