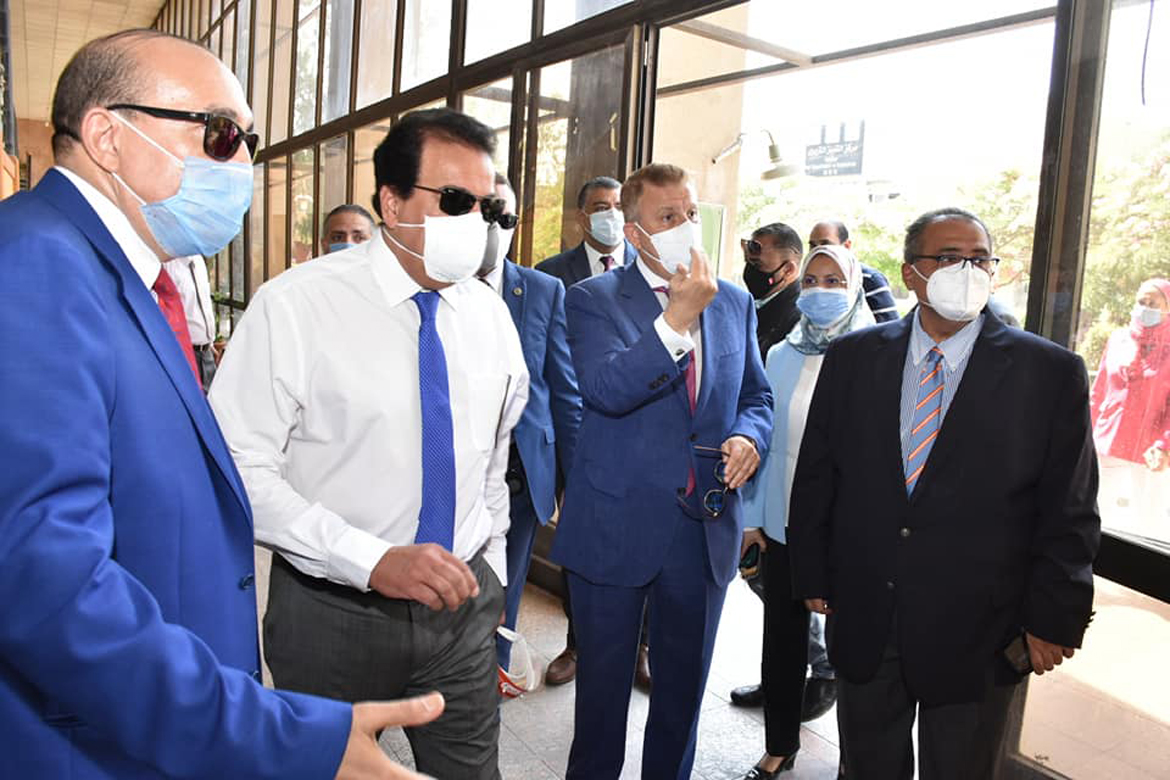 Prof. Dr. Khaled Abdel Ghaffar, Minister of Higher Education and Scientific Research, conducted an inspection tour of the Faculty of Education, Ain Shams University, accompanied by Prof. Dr. Mahmoud El-Metini, University President and Prof. Dr. Abdel-Fattah Saud, Vice President of the University for Education and Student Affairs, where the Minister of Higher Education and Scientific Research followed the progress of the examinations and was assured of the implementation of all precautionary and preventive measures to confront the Corona virus in order to ensure the safety of students. It also checks students' entry and exit gates to ensure that the social separation principle is achieved.

During the tour, Prof. Dr. Mahmoud El-Metini stressed that Ain Shams University has taken all the precautionary measures in the various faculties of the university in cooperation and coordination with the university hospitals and the General Administration of Medical Affairs, pointing to the success of the e-learning system in compensating the period of stopping the lectures and their regularity.

Prof. Dr. Abdel-Fattah Saud said that the university was keen to allocate 3 or 4 periods for exam committees to avoid overcrowding of students, with a comprehensive sterilization of halls and corridors and all the entrances and exits of students' passage.

He added that the exam system has been significantly modified to be the most multiple-choice system in most of the university’s colleges, pointing out that the correction is done electronically.

Prof. Dr. Maged Abu Al-Enein, Dean of the Faculty of Education, said that exams are held over 22 days, as the number of students of the fourth group reaches 2500 students distributed over 28 departments, and the number of courses for each division reaches from 7 to 10 courses according to the division, explaining that for each of the literary, scientific and basic students Two days a week, with an average of 350 to 450 students in one period, distributed over 35 committees in the first period and 35 committees in the second period, at an average of 4 periods per day.

He explained that the committees were divided so that the large audiences accommodate 30 students, the middle grades are 15 students, and the halls are 8 to 14 students, according to the size of the hall, as part of the precautionary procedures followed by the college in order to preserve the safety of students.