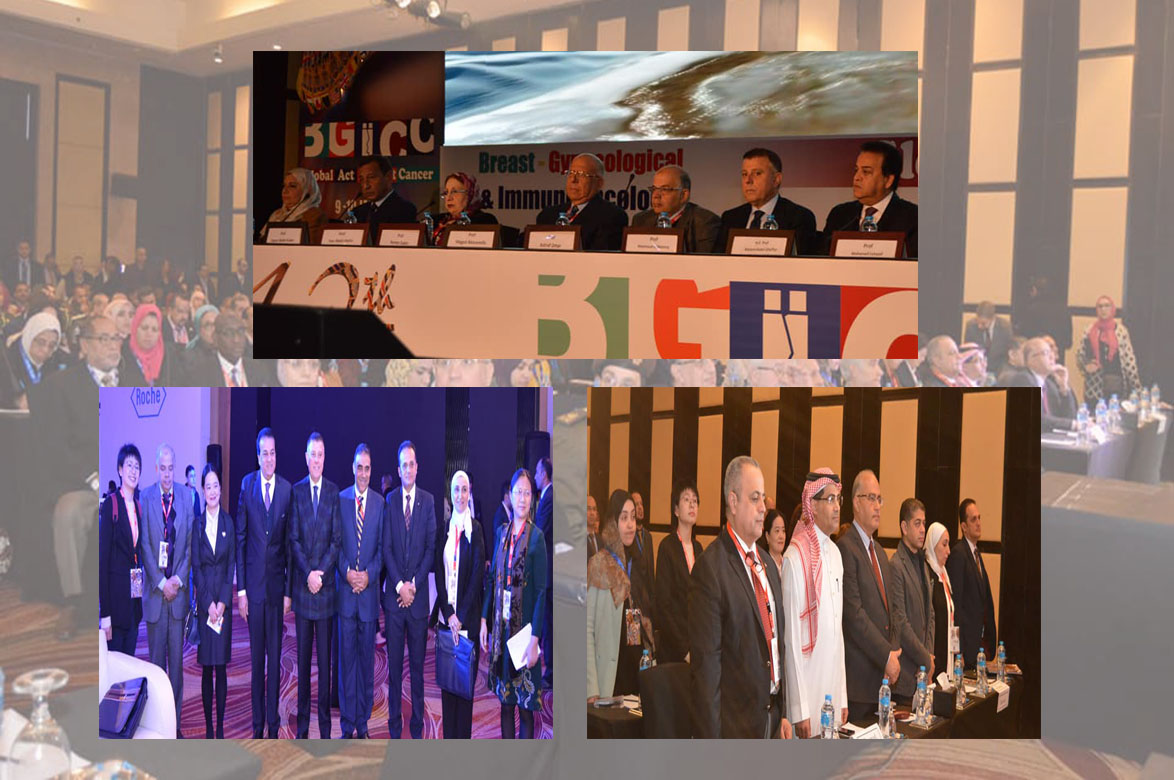 Prof. Dr. Khaled Abdel Ghaffar, Minister of Higher Education and Prof. Dr. Mahmoud El-Metini, President of the University, opened the activities of the International Conference of the International Cancer Society, with the attendance of 120 scientists from all over the world from the United States, Europe, China, India and Africa, under the title of the global movement against cancer with the presence of more than 3500 doctor.

Where Prof. Dr. Khaled Abdel Ghaffar confirmed on the importance of this conference in its twelfth session to gain more success and expertise, as it contains multiple research papers as well as workshops.

Prof. Dr. Mahmoud El-Metini, President of Ain Shams University, stressed on the necessity of holding international conferences such as this conference, which would reach positive results in order to reduce cancer in general through cooperation in cancer control strategies, exchange of experiences in this field, in addition to cooperating with international associations and international experts with global competencies to fight cancer.

Prof.  Dr.  Ashraf Omar, Acting Dean of the Faculty of Medicine, Ain Shams University, confirmed that continues efforts to combat breast cancer through a deep sense of responsibility towards the health care community, providing a good platform for exchanging experiences on cancer diseases, and determining the actual condition of chemical breast problems and underarm armpits in breast tumors.

Prof. Dr. Hisham Al-Ghazali, Professor of Oncology and President of the International Cancer Society and Secretary General of the conference, explained that this year the conference is being held under the auspices of Dr. Khaled Abdel Ghaffar, Minister of Higher Education and Scientific Research, Dr. Hala Zayed, Minister of Health and Population, Dr. Mahmoud Al-Matini, President of Ain Shams University, and Dr. Ashraf Omar Al-Qaim acting dean of the Faculty of Medicine, Ain Shams, and in association with 12 international societies headed by the American Society of Oncology, the European Society of Oncology, the European Society of Oncology Surgery, and the American Society for Radiotherapy and Oncology, in the presence of the heads of international societies.

Al-Ghazali stressed that the conference will launch several new discoveries and treatment plans this year, among them: launching immunotherapy for the first time in triple-negative breast tumors that are widespread and that has proven successful with chemotherapy compared to chemotherapy only in raising cure rates to 75%, and using immunotherapy for the first time In liver cancer, which showed results overcoming targeted therapy, which doubles response rates and recovery rates, while results showed a significant improvement in the treatment of kidney tumors through immunotherapy and targeted therapy compared to targeted treatment only in diffuse kidney tumors

He explained that hormonal targeted treatments helped raise the cure rates to 70%, compared to only 40% for hormonal treatment in diffuse breast tumors, indicating that these drugs from a new family helped patients well to avoid chemotherapy in the positive group of hormone receptors, which represent 70 % Of patients.

Dr. Maged Abu Gharbiyeh, head of the drug discovery department at Temple University in the United States, who has patented several drugs, including: Breast cancer drugs that there will be two workshops for research and drug discovery, and how to genetically alter cells and fight them with smart new drugs that increase the chances of recovery with the least possible side effects.

It holds specialized sessions in radiology, pathology, oncology surgery, chemotherapy, immunotherapy, radiotherapy, palliative, nursing care, clinical pharmacy, and the basics of scientific research, while the conference continues in its endeavor to support the training of young doctors in Egypt and the Arab world by hosting two radiological planning workshops from the European Society, and in support of scientific publishing. The conference will publish a special issue of the international journal "Tomory", including abstracts of research selected from among hundreds of advanced papers from all over the world.

He pointed out that 4 travel grants were presented to Egypt and the conference was attended by doctors from Russia, Nigeria, Jordan and the Dominican Republic

This is in order to achieve the most important goals of the conference in Egypt being a source of science instead of being a carrier of the experiences of the world, the conference holds three extended sessions and debates to develop new Egyptian and regional guidelines for the interaction of Egyptian and international experts from different disciplines so that those recommendations are published internationally in the name of Egypt as the most important major conferences Europe and the United States of America.

For her part, Dr. Heba Al-Zawahiri, a professor of oncology at the National Institute, said that malignant breast tumors in young women represent a real health problem followed by several social and family problems such as the inability to work and the consequent loss of income that it brings to the family, as well as the inability to have children and form a family At an appropriate age, along with the psychological state, fear of the future, and anxiety, noting that for these important reasons there is an interest in giving women under forty continuous attention that starts from giving them an opportunity for hormonal treatment while maintaining ovarian efficacy, if the type of tumor accepts this, as it is a type that can be cured by hormones, not chemotherapy, as the woman undergoes educational sessions and supports the psychological state in order to support her in general.

She pointed out that the statistics of the National Cancer Institute showed that the first assembly hospital, which is completely affiliated to the Cancer Institute, which provides all its services for free, receives 1500 cases of malignant breast tumors, other than the frequency of previous years under treatment or follow-up annually, where the cases that are discussed daily reach 300 cases, including 20% are under 40 years old, and this number represents an important phenomenon that confirms that the average age of Egyptian breast tumors is much lower compared to their rates in the West, as the average age of breast tumors in Egypt is 45 - 50 years, and the average age in the west is 65 to 70 years.

Dr. Al-Zawahri announced that women under the age of forty can be allowed to have children and complete their family plans after two years of preventive hormonal treatment, and that breastfeeding will not be prohibited after the patient has recovered, and the results of studies have shown that childbearing after two years of treatment and breastfeeding may be a reason to prevent future tumors from returning.

She added that it is remarkable that some malignant tumors may appear with ages that were not seen before, such as some cases that were diagnosed at the National Cancer Institute late in the ages of 18 and 20 years, and this really represents a phenomenon that must be studied, and conducting genetic analyzes for the whole family where It was discovered that there is a defect or difference in some genetics, as well as newly appeared drugs directed to treat breast tumors accompanied by the genetic mutation.

Dr. Yasser Abdel Kader, professor of oncology at the Faculty of Medicine, Cairo University, said that this year’s conference will announce the promising first results of immunotherapy, and its role in treating all types of tumors, especially lung, breast, head and neck tumors. The results and experience of Egypt in this specific specialization will be published, especially after Egypt has a long history in the use of these types of treatments, noting that the conference is an opportunity to reach unified treatment protocols commensurate with the physical conditions of the region.

Dr. Maged Abu Saada, Professor of Obstetrics and Gynecology, Faculty of Medicine, Ain Shams, pointed out the role of surgical and chemotherapy and radiotherapy in cases of endometrial cancer and determining the patient's benefit from these therapeutic methods, and that the means of diagnosing and treating various diseases that precede cancerous transformation in different organs provide for Patient anxiety, suffering and material cost for treating various cancerous tumors.

Dr. Mohamed El-Shenawy, professor of surgery, indicated that this year's conference will include accurate new breast surgeries, breast surgeries after receiving the initial chemotherapy, how to preserve the breast and eradicate tumors without leaving visible traces, and special breast surgeries in fierce types of cancer such as triple-negative cancer.

While Dr. Omar Zakaria, professor of tumor surgery, explained that the surgery sessions will address how to deal with the lymph nodes under the armpit, and how to maintain the largest amount without removing them, by using modern methods to search for the guardian gland or the first lymph gland for the breast, as will be used Different methods for identifying the guardian gland in special cases after receiving the initial chemotherapy treatment where special surgical skills and innovative methods are required, while surgery sessions cover different surgical methods to maintain the aesthetic shape of the breast with complete removal of tumors with reassuring safety edges modern methods such as refinery fat injection. Several meetings will take place on the sidelines of the conference, including a meeting with the African Oncology Society to discuss scientific and medical support in the field of oncology to various African countries, as well as with the Russian Society and Fudan University in Shanghai, China, to study research exchange and conduct joint research.