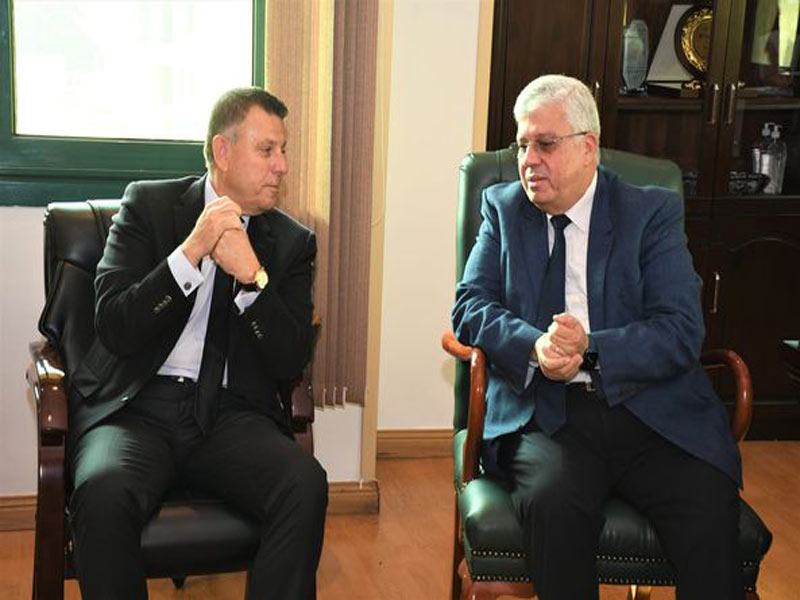 During the inspection tour, the minister praised the medical city at Ain Shams University, which is considered a scientific edifice for researchers in the medical fields, stressing that caring for the health of the Egyptian citizen is the main goal of the Egyptian state, especially in light of the Egyptian government's efforts to implement many health projects.

The Minister of Higher Education was briefed on the implementation rates of the medical city, which will be a strong addition to the health care system in Egypt, directing the need to complete all equipment according to the specified timetables.

The Minister congratulated Ain Shams University for the completion of this distinguished project, which is a strong and effective link between the field of education, training, and academic research on the one hand, and the field of health and services on the other hand, as well as providing the opportunity for citizens to obtain distinguished medical care.

The minister added that the medical city is not a city that provides health care to citizens only, but rather it is a civilizational shift in the Cairo governorate, thanking the governorate for overcoming all obstacles so that this distinguished medical edifice is complete, and its medical units and specializations are homogeneous.

For his part, Dr. Mahmoud El-Meteini explained that the Ain Shams University Hospitals area has been transformed into an international medical city in the heart of Cairo; To serve the people of the capital and the surrounding cities, while providing the necessary financial allocations for this vital project, which will provide integrated services to thousands of patients, as well as developing the main axes of the Abbasiya area and square; to improve services, and to establish specialized centers at the highest level, its revenues will be greatly attributed to the medical service provided to patients, in addition to the establishment of a green garden area on hospital campuses that will be a green outlet for them and doctors.

The President of Ain Shams University added that it is expected that the cost of developing the medical city will not be less than 2.5 billion pounds, especially since university hospitals in Ain Shams serve more than 3 million patients annually in all specialties, as the medical city includes 10 hospitals and medical centers in all general specialties. and accurate, and a medical research center and 3430 beds.

On the sidelines of the inspection tour, a meeting was held to explain the current position of the project, the construction works that have been completed, and the percentages of achievements achieved so far. Challenges and obstacles facing the medical city were also reviewed and discussed.

At the level of the Cardiothoracic, Thoracic and Vascular Diseases and Surgery Hospital, intensive care, operating rooms, internal and educational departments are being completed, and the development of the combined operations unit in the Surgery Hospital has also been completed, as well as the development of intensive care for the chest, heart care and the thoracic binoculars unit in Al Batinah Hospital. And the establishment of a model unit for dialysis with a capacity of 57 chairs using the latest scientific methods, and a central water purification unit, as well as the development of some internal departments.

The meeting dealt with the stages of development and restoration of the Obstetrics and Gynecology Hospital, and the establishment of the Ain Shams University Virtual Hospital. To provide integrated training programs for doctors and specialized treatment services for patients from different countries. The general site has also been developed and the outer wall surrounding the medical city and the College of Medicine, and the multi-story garage, has been established, in addition to the establishment of a hazardous medical waste disposal complex. The main blood bank, the endoscopy center, the psychiatry center, the outpatient clinics, and the hospital training center are being completed, and an oncology hospital is being established.

Dr. Adel Abdel Ghaffar, the official spokesman and media advisor to the Ministry of Higher Education and Scientific Research, said that the medical city at Ain Shams University is one of the huge medical edifices that provide services to citizens in Cairo Governorate and the neighboring governorates, indicating that the development work that takes place in university hospitals is subject to continuous follow-up from the Minister of Higher Education.