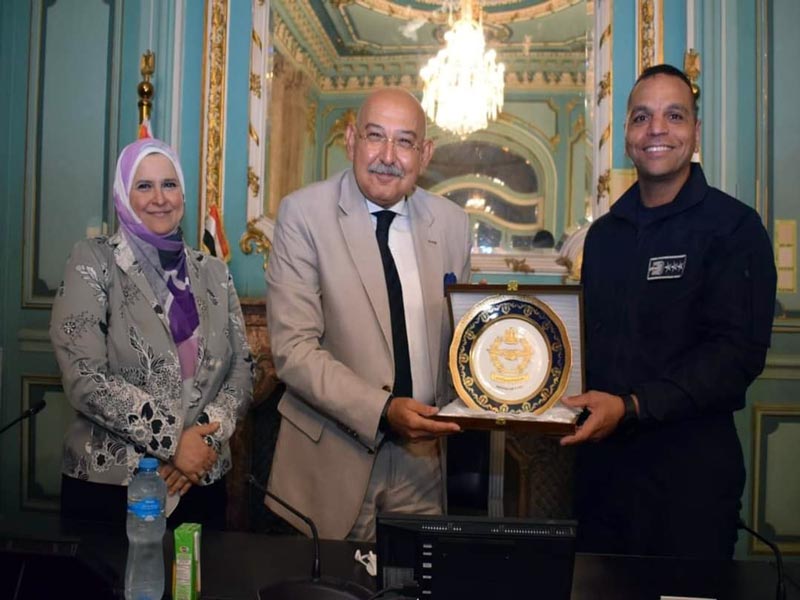 Ain Shams University, headed by Prof. Dr. Mahmoud El-Metini, a greeting of pride and appreciation for what was presented by Prof. Dr. Hesham Tamraz, Vice President of the University for Community Service and Environmental Development Affairs, has a distinguished professional, wise management, and great works to serve the community and develop the environment at the university, due to the end of his tenure as Vice President of the University to reach the legal age.

Prof. Dr. Rasha Al-Didi, Vice Dean of the Faculty of Arts for Community Service and Environmental Development Affairs, and Zayed Medical Center, honoring Prof. Dr. Hesham Tamraz, Vice President of the University, and the honoring ceremony comes in gratitude and appreciation for his legacy of achievements, values ​​and firm constants that he instilled in everyone who dealt with him to be a beacon and a standard for giving and giving to all members of Ain Shams University.

As expressed by Prof. Dr. Rasha Al-Didi, during the honoring ceremony, expressed her appreciation and pride for Prof. Dr. Hesham Tamraz, as he is a stature and a scientific and administrative value that is difficult to repeat, wishing him continued success in his life's journey at all levels.

She also praised the size of the university's achievements over the course of his tenure through his application of the philosophy of teamwork, which facilitated overcoming all difficulties, and affirmed her pride and happiness with the university's progress at various levels and its international classification to compete with its peers from the most prestigious international universities.

In his speech, Brigadier Dr. Wael Al-Saidi, the leader of the Zayed Medical Center, expressed his great happiness in the fruitful and constructive cooperation with Ain Shams University represented in the Community Service and Environmental Affairs Sector at the Faculty of Arts, explaining that honoring honorable models of statures is a national wealth that the state bets on them to keep pace with the progress of the developed world, He also stressed that the renaissance of the state lies in upgrading the capabilities of its scholars and thinkers and investing those capabilities and employing them to achieve renaissance and advancement.

He explained that the Zayed Medical Center of the Air Force is keen to honor the owners of achievements and contributions in various fields to enhance their position within the community to become a role model and a source of pride for the nation.

During the honoring ceremony, a documentary film of the achievements of Prof. Dr. Hesham Tamraz is one of the valuable and noble works that directly contributed to the growth and development of the university community through a comprehensive development of all facilities of the Faculty of Arts, in addition to conducting many and many comprehensive awareness and development convoys that roamed throughout the Republic and the neighborhoods of Greater Cairo

As expressed by Prof. Dr. Hesham Tamraz expressed his great happiness with this honor, and pointed out in his speech that there is no scientific advancement without being accompanied in parallel by an administrative and architectural advancement to serve everyone, and that the general direction of the state was based in the development and development movement on the strategy of parallel axes through the cooperation of all state institutions to achieve the desired integration that It is one of the directions of the new republic under the auspices of His Excellency President Abdel Fattah El-Sisi, stressing that there is always hope for the integration of the efforts of state institutions in setting a general framework for a better future for the people of Egypt, pointing out that the community service and environmental development sector has developed an integrated plan to advance the level of construction at Ain Shams University within the integrated strategy to put the university in the position it deserves.

At the conclusion of his speech, Prof. Dr. Hesham Tamraz said that the wheel of development will not stop until the university reaches the desired level at all educational and service levels, so the generosity and solidarity of Ain Shams University scientists continues until it reaches the global level and called for the necessity of holding more fruitful and useful protocols similar to the cooperation protocol between the College of Arts and Zayed Medical Center.

Prof. Dr. Rasha Al-Didi gave the memorial shield of the Faculty of Arts to Prof. Dr. Hesham Tamraz, and Brigadier General Dr. Wael Al-Saidi donated the shield of the Zayed Medical Center of the Air Force in gratitude for his achievements in the history of Ain Shams University.