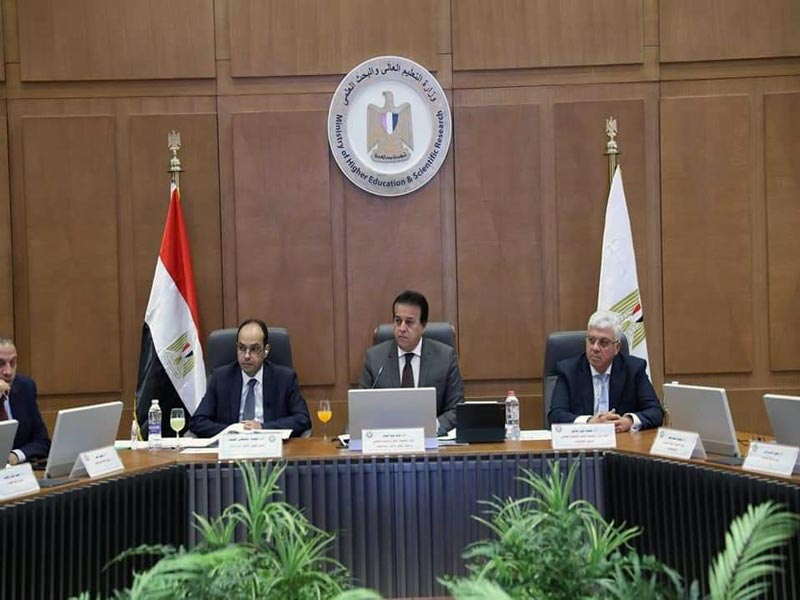 The Supreme Council of Universities held its regular meeting, headed by Dr. Khaled Abdel Ghaffar, Minister of Higher Education and Scientific Research, at the new headquarters of the Ministry of Higher Education and Scientific Research in the new administrative capital, in the presence of Dr. Muhammad Latif, Secretary of the Council and members of the Council.

The Minister welcomed the members of the Council for their attendance at the first meeting of the Council in the new headquarters of the Ministry of Higher Education and Scientific Research in the New Administrative Capital, in preparation for the gradual transfer of workers in the Ministry during the coming period, in implementation of the directives of President Abdel Fattah El-Sisi, President of the Republic.

The Council expressed its thanks and appreciation to President Abdel Fattah El-Sisi for his unlimited support for the establishment of the new administrative capital, which has become a reality beyond achievement to the miraculous and testifies to the giant national projects achieved by the new republic that achieved a great qualitative and civilizational leap at all levels. The Council also thanked the government for its tireless efforts in following up and implementing the projects of the administrative capital until the ministries were ready to perform the services entrusted to them.

The Minister and the members of the Council offered condolences to the family of the student, Naira Ashraf, the deceased of Mansoura University, praying to God to bless her with his mercy. The Minister directed to activate the role of universities in holding seminars, events and awareness activities to renounce violence, as well as providing psychological and social support to students.

The council reviewed the reports of university presidents about the end-of-term exams for the second semester of the current academic year, which indicated the progress of exams work in universities and institutes according to the set timetables and the required discipline. In this regard, the Minister thanked the faculty members, administrators, and workers in universities and institutes for their full commitment during the end of the current academic year exams period. He also directed the speedy completion of announcing the results for students in the interest of students.

The Minister thanked the universities for their success in eradicating illiteracy (157) thousand citizens in just 3 months (April 2022 session), in cooperation with the General Authority for Literacy and Adult Education, within the framework of the presidential initiative “A Dignified Life” to eradicate the illiteracy of citizens in the villages of the Egyptian countryside. The necessity of continuing this important national role for universities during the coming period, with continuous follow-up and evaluation.

The Minister directed the importance of intensifying the community participation of universities in cooperation with the "Decent Life" initiative, during the summer vacation period, through medical, veterinary and agricultural convoys, educational seminars, events and various activities, in order to activate the role of universities in community service and environmental development.

The Minister also directed the universities to continue implementing the studies and research plans submitted by the vice presidents for graduate studies, which aim to serve development issues and deal with the challenges facing each region to which the university geographically belongs.

The Minister directed the universities' interest in implementing the sports, artistic and cultural activities plan, supporting sports and artistic talents, and enhancing the affiliation of university students, during the end of the current academic year vacation.

The council reviewed a report on the role of Egyptian universities in facing climate change, as public universities issued more than 160 periodicals, journals and scientific books on climate changes, and published 957 research papers on climate changes, and contributed to increasing international publication to 840 international research papers in this field. More than 550 events, conferences and workshops on climate change have been organized during the last three years, as well as the preparation of 363 research projects, and more than 47 international cooperation agreements. 631 Master's theses and 304 Ph.D. theses dealt with topics related to climate change, in addition to the organization of 914 Egyptian universities. A training course for undergraduate students, and 927 training courses for postgraduate studies, in preparation for participation in the 27th session of the Conference of the Parties to the United Nations Framework Convention on Climate Change (COP 27), which is scheduled to be hosted in Sharm El-Sheikh during the month of November 2022.

The Council reviewed a report on the achievements of the Central Unit for Information Technology Training at the Electronic Services Center of the Supreme Council of Universities, during the period from January 2019 to June 2022, which included training 71,667 trainees, evaluating and accrediting 53 training centers, to work as approved training and testing centers to activate the FDTC Fundamentals of Digital Transformation Certificate In addition, training courses for 558 trainers were carried out to raise the efficiency and accreditation of trainers at training centers in government universities and participating institutions, in addition to signing 21 cooperation protocols with private and private universities and civil society institutions, to activate the Certificate of Fundamentals of Digital Transformation on the employees of these institutions.

The council reviewed several reports on the results of field visits to colleges and institutes that have started or will start studying in them, and that are affiliated with the committees of the sectors (pharmaceutical studies - dentistry - physical therapy - arts - childhood and kindergarten studies - specific education and home economics), and the council directed to complete all material and human capabilities. To ensure the proper continuity of the educational process.

Presented by Dr. Mohamed Amer, Executive Director of the Fund for the Care of the Innovators and the Gifted, gave a detailed report on the centers that were established to discover and care for the talented and the innovators in various universities, as well as the programs launched by the Fund to support talented, talented and creative students, noting that these programs included (innovation incentive, makers of excellence). Discovering innovators, entrepreneurs in Egypt), in addition to preparing a competition between universities and research centers in the field of innovation and cooperation with industry.

The Council approved the launch of the initiative to develop the skills of Egyptian university students; To compete in the labor market and qualify them for future jobs, entitled "Skills up", Dr. Mahmoud Saqr, President of the Academy of Scientific Research and Technology, said that this initiative aims to support the efforts of Egyptian universities in providing capacity building programs that qualify graduates for the local and international labor market, through a package of training programs in communication skills, self-development, critical thinking, digital transformation, and business growth. technology marketing, emerging technology companies, intellectual property and others, and the Academy of Scientific Research and Technology will provide financial support for this initiative in the amount of 3 million pounds annually.

Dr. Adel Abdel Ghaffar, Media Adviser and Official Spokesperson for the Ministry of Higher Education and Scientific Research, said that the Council agreed to start studying at the Faculty of Medicine, Al-Arish University, during the academic year 2022/2023.

The spokesperson added that the council approved the rules for coordinating admission to public universities and institutes for students who obtained the Egyptian General Secondary Certificate this year to join universities in the 2022/2023 academic year, with the same coordination rules in force last year.

The spokesperson added that the council approved the rules for coordinating admission to government universities and institutes for students who obtained technical secondary certificates this year to join universities in the 2022/2023 academic year, with the same coordination rules in force last year.

The spokesperson added that the council also approved the rules for coordinating admission to government universities and institutes for students holding equivalent secondary certificates (Arab and foreign), to join the academic year 2022/2023 with the same coordination rules in force last year, according to the following minimum limits:

1- To have a minimum of at least 95% to express a desire to join medical colleges.

2- To have a minimum of 90% at least to express a desire to join the faculties of dentistry, pharmacy, physical therapy, economics, political science and media.

3- The minimum percentage of at least 85% to express a desire to join the faculties of engineering, computers and information.

4- Acceptance should take precedence over the total or legal total of the student’s grades, within the limits of the numbers prescribed for each certificate, given that these colleges require a distinguished scientific level.

5- Submission of the document stating the actual legal legal residence of the student and his guardian in the country from which the student obtained the equivalent secondary certificate for the duration of the study on which the equivalent secondary certificate is awarded (and the date of the start and end of the study and the end of the exams are determined by a letter notarized by each of the Egyptian cultural advisor from the state The certificate’s donor or the cultural advisor of the state granting the certificate in the Arab Republic of Egypt), by presenting an actual residence documented by the Egyptian cultural advisor or the Egyptian embassy in the donor country and a passport showing the dates of entry and exit and a movement certificate indicating the dates of entry and exit, in implementation of the judicial ruling issued by the State Council in this regard.

6- Students of equivalent certificates (Arab - foreign) are nominated for faculties of Egyptian public universities, according to the governorate of residence that the student registers within his basic data on the website of the coordination office.

The Council approved the rules and procedures for admitting international students to Egyptian universities and institutes (undergraduate and postgraduate levels) to enroll in the academic year 2022/2023.

The official spokesman added that the council agreed to conduct capacity tests for all faculties whose enrollment requires passing aptitude tests immediately after the end of the high school exams, with the same rules and procedures for admission tests in force last year without change, taking into account the abolition of the faculties of tourism and hotels from the lists of colleges that are required Acceptance by passing aptitude tests.