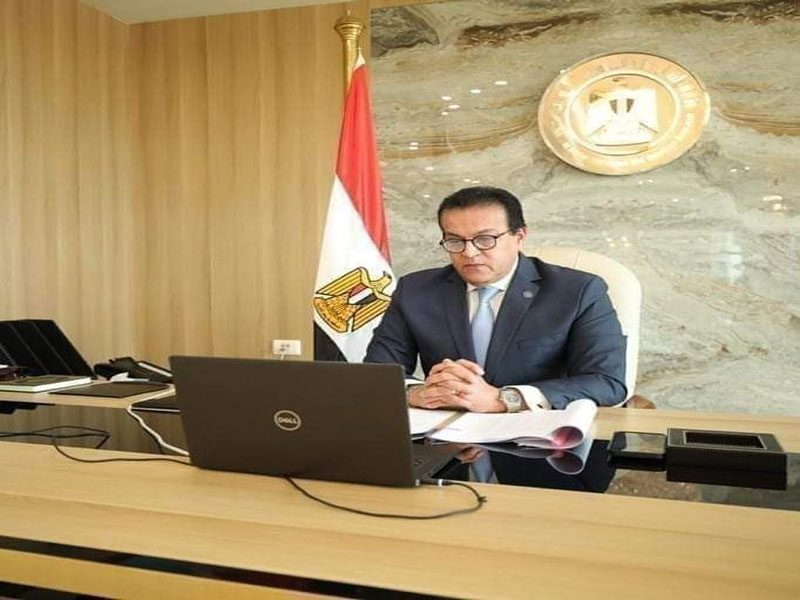 Dr. Khaled Abdel Ghaffar, Minister of Higher Education and Scientific Research, reviewed a report submitted by Dr. Muhammad Latif, Secretary of the Supreme Council of Universities, on the efforts of universities to combat illiteracy within three months (April 2022 session), as one of the most important features of universities’ societal participation, within the framework of the national project to eradicate illiteracy in Egypt, in cooperation with the General Authority for Literacy and Adult Education.

The report pointed to the success of Egyptian universities in eradicating illiteracy (157) thousand citizens during the April 2022 session, in cooperation with the General Authority for Literacy and Adult Education, and within the framework of the presidential initiative "A Dignified Life" to eradicate the illiteracy of citizens in rural Egyptian villages.

Dr. Khaled Abdel Ghaffar stressed the importance of universities’ cooperation with the General Authority for Literacy and Adult Education to eradicate the illiteracy of citizens, noting that all aspects of support needed by universities will be provided; To enable it to play its national role in facing this challenge, stressing that the problem of illiteracy is of great importance to universities, and therefore it comes at the top of university work priorities.

The Minister thanked the Supreme Committee for following up on the implementation of the literacy project in universities in the Supreme Council of Universities, headed by Dr. El-Hilali El-Sherbiny, professor at Mansoura University, and former Minister of Education and Technical Education, for the fruitful efforts of the committee in confronting illiteracy.

On his part, Dr. Adel Abdel Ghaffar, Media Adviser and Spokesperson for the Ministry of Higher Education and Scientific Research, said that the universities’ effective role in eradicating illiteracy reflects their vital role in community service and environmental development, noting that universities have distinct human and material energies that are utilized in facing this challenge. Stressing the universities’ keenness to support Egypt’s Vision 2030, and to contribute to the implementation of the “human building” strategy launched by the political leadership, through the implementation of an integrated plan to support the national project to eradicate illiteracy and adult education; Emphasizing the role of universities in spreading science, knowledge, enlightenment and combating illiteracy; And to activate its role in community service.

The official spokesman added that the distinguished achievements made by universities to eradicate the illiteracy of citizens came as a result of following a number of important executive procedures, including: (activating the cooperation protocol between the Supreme Council of Universities and the General Authority for Literacy and Adult Education, and the Ministry's participation in the implementation of the illiteracy challenge project at the level of the Arab world). The formation of a specialized committee to follow up efforts to combat illiteracy, and the launch of several competitions at the level of universities and institutes to compete for the best university award in facing the problem of illiteracy.