Proper Family Guidance to Deal with People with Special Needs and Develop Human Skills .. a Symposium at the Faculty of Postgraduate Studies for Childhood 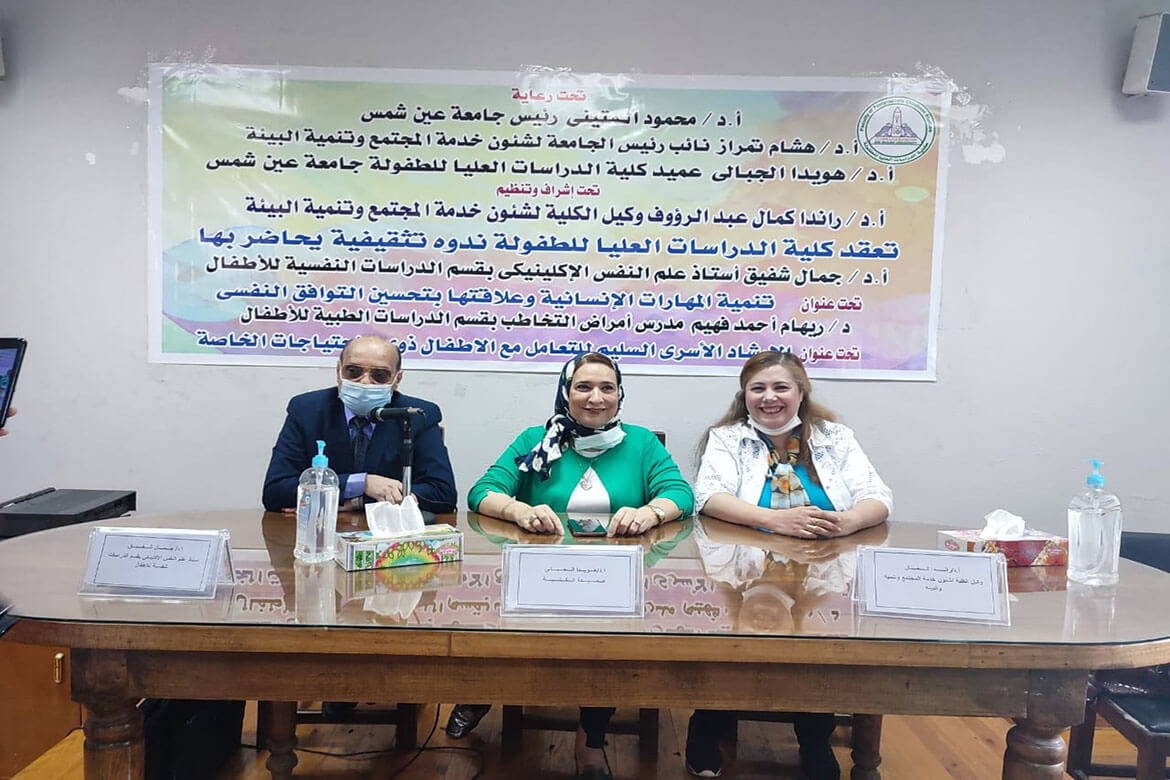 Proper Family Guidance to Deal with People with Special Needs and Develop Human Skills .. a Symposium at the Faculty of Postgraduate Studies for Childhood

The Faculty of Childhood Graduate Studies at Ain Shams University organized an educational symposium, under the auspices of Prof. Dr. Mahmoud El-Metini, President of the University, Prof. Dr. Hisham Tamraz, Vice President for Community Service and Environmental Development, and Prof. Dr. Howayda Al-Gabali, Dean of the Faculty, under the supervision and organization of Prof. Dr. Randa Kamal Abd El-Raouf, Vice Dean for Community Service and Environmental Development Affairs. The symposium targeted graduate-studies students at the Faculty.

Prof. Dr. Howaida Al-Gebali confirmed, in her speech during the symposium, said that the Faculty continues to organize this series of symposia that benefit the community, especially parents of children with special needs, praising the efforts spent by all departments in the Faculty to hold these symposia.

Prof. Dr. Randa Kamal Abdel Raouf, Vice Dean for Community Service and Environmental Development, stated that holding these symposia benefits a large segment of students, specialists and people with special needs families, noting the continuation of symposia aimed at preparing students for the labor market and developing cultural, social and psychological awareness, as well as educating families of children with disabilities, that visit the center frequently, in several areas, including family counseling, behavior modification, and self-care, praising the rapid response and the great attention paid by the department's professors to such symposia.

The symposium included two lectures, the first entitled "Development of Human Skills and its Relationship with Improving Psychological Adjustment", during which Prof. Dr. Gamal Shafik, Professor of Clinical Psychology, Department of Child Psychological Studies, who emphasized that the human element is the main element in developed countries, adding that countries with limited wealth are concerned with the human element, which is their wealth.

He also discussed the characteristics of human skills, including emotional stability, decision-making ability and responsibility, in addition to good morals, patience, willpower, and not despair and leaving problems to escalate.

He indicated the reasons for the collapse of mental health, stating that there must be three elements to maintain mental health, which are giving oneself its right, taking into account not to oppress others and not to do something that angers God, and a person must appreciate and defend himself.

Prof. Dr. Gamal Shafik explained the steps to develop human skills, which include not to put pressure on oneself in a continuous way and not over-criticizing others, while adhering to positive constructive criticism and trying to constantly praise the positives of others to show their best and not to think about the incidents of the day before sleeping.

The second lecture was entitled "Proper Family Counseling for Dealing with People with Special Needs", which was lectured by Dr. Riham Ahmad Fahim, a speech pathology teacher at the Department of Psychological Studies, in which she emphasized that family counseling is one of the most important lectures that can be offered to parents of children, especially those that have children with special needs, because it is necessary for parents to learn the right ways to deal with children, noting that the mother must be well aware that the child is an independent person and his upbringing begins from the moment he is a fetus, and she must speak to him constantly and use tone-on-tone speech to attract the child’s attention and alert his brain cells.

She added that mother should also try to constantly introduce the child to his surroundings in a real way, and use sentences and pronouns during her conversation with him, and that the mother should strive to restore social ties within the large family, which represents a rich environment for the upbringing of her child, stressing the need for the mother to have courage in the event of any defect in her child or a problem and to recognize the problem and not evade it, because running away can aggravate the problem for the child.