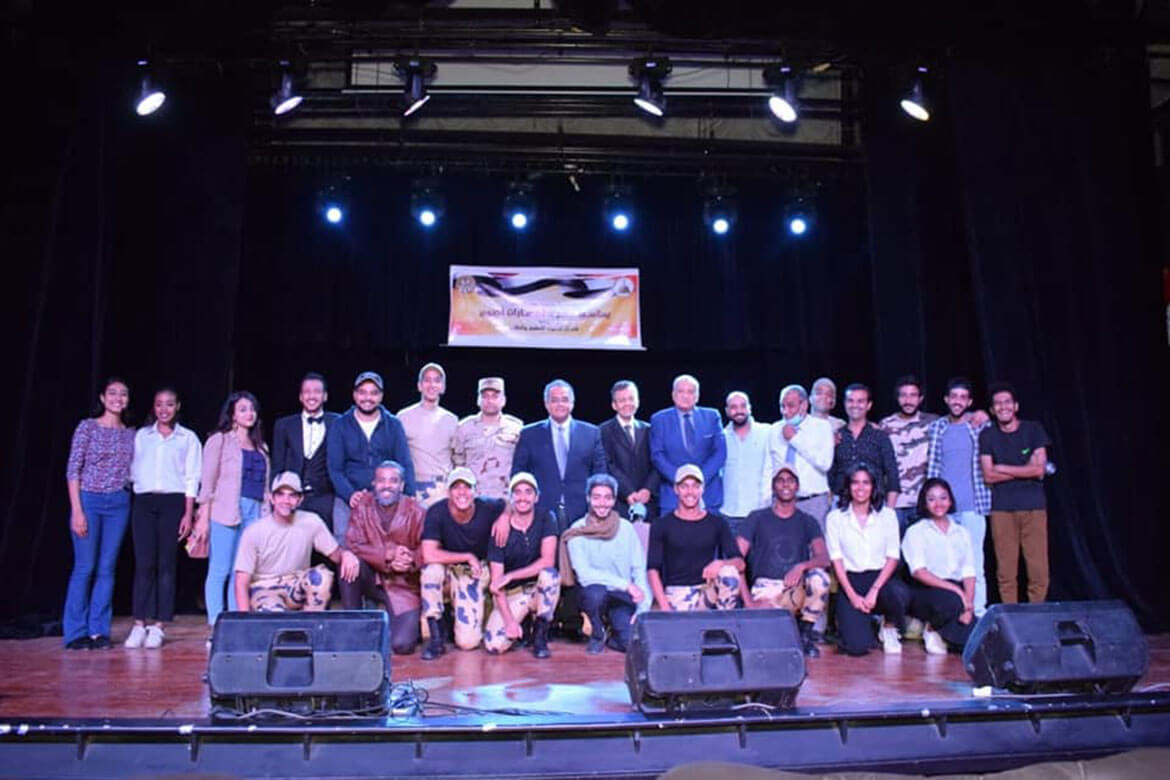 During the speech of Prof. Dr. Abdel-Fattah Saoud stressed that the Egyptian belief, based on defying all odds and achieving achievements that the world sees as impossible and that the Egyptians succeed in achieving, was the main reason for the October victory and the successive victories that followed over the generations.

In his speech to the students, he reviewed some of his memories of the 1973 victory, which instilled in his character since childhood the importance of planning, working hard and cooperating to achieve the goal.

He directed the students to show the spirit of great victory, preserve what our ancestors had achieved, and work hard, lasting and continuous, while insisting on achieving successive achievements and victories that befit our dear homeland, Egypt.

The celebration included a set of artistic paragraphs for the university choir, where Prof. Dr. Abdul-Fattah Saoud, with the professional level of the students, which confirms that the university's distinction for its students deserves the five-star rating in the QS Global Star Rating.

The choir of Ain Shams University, led by Maestro Mahmoud Waheed and Maestro Mahmoud Mohsen, presented a number of patriotic songs such as the Voice of My Country, which has a sweet need, which was well received by the audience.

The student, Muhammad Yasser, a student of the People of Determination at the Faculty of Arts, presented a song, "Oh, the sweetest name in existence."

The celebration included a theatrical performance "For Every Generation Challenged", participated in the folklore team led by Hassan Shehata and the university choir team led by Maestro Mahmoud Mohsen, written poems and composed by Amira Fawzy College of Languages, vision and directed by a. Mahmoud Tantawy.

Prof. Dr. Abdel-Fattah Saoud indicated that the theatrical performance embodies the victory of the Egyptians in the war of October 6, 1973, which has continued until our time in the Egyptian state’s war on terrorism, which motivates us to celebrate the nation’s martyrs throughout the ages, pointing out that the new republic is a role model in the work of all state institutions, which is the approach and philosophy of the university on which it is walking in order to pursue excellence and achievement at all levels.

In the speech of the Director of the Military Education Department at the university, he stressed that the glorious October War came as a result of the work and effort of the armed forces and the patience and cooperation of the people to defeat Egypt, an arrogant enemy who never thought that the Egyptian army would awaken after the defeat of 67.

The Director of Military Education added that Egypt has heroes, generation after generation, so the October generation liberated the land, then another generation cleansed Sinai of terrorism, and the role of future generations will come to preserve their gains and rebuild the land.

A documentary film entitled "October is an Egyptian Will", produced by the Armed Forces' moral affairs, was also shown.

It is noteworthy that Ain Shams University has organized a series of celebrations and field visits for military education students since last month, coinciding with the 48th anniversary of the October victories.