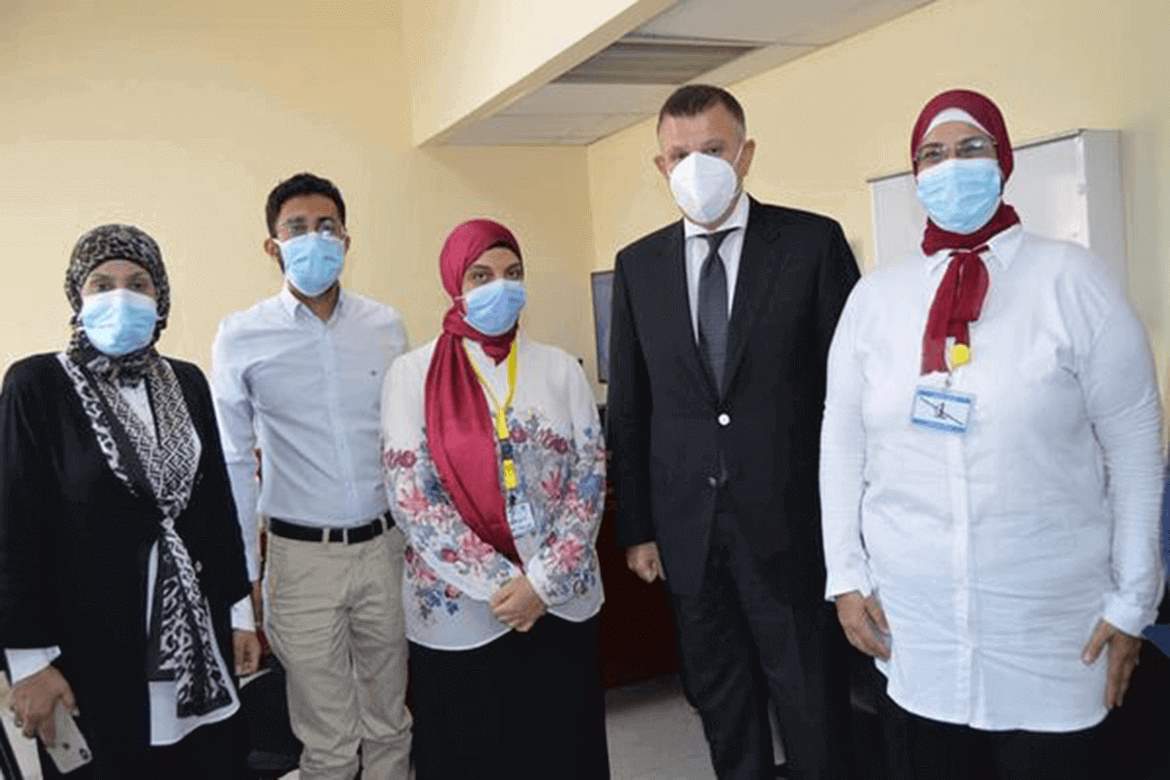 Prof. Dr. Mahmoud El-Metini, President of Ain Shams University, witnessed the injection of the second Egyptian child with spinal muscular atrophy, the one-year-old and ten-month-old child, Aser Karim El-Din, which was conducted for the second time in the Arab Republic of Egypt at Ain Shams Specialized Hospital.

Where the doctors of Ain Shams Specialized Hospital under the supervision of Prof. Dr. Nagia Ali Fahmy, Professor of Neurology and Director of the Musculoskeletal Diseases Unit at Ain Shams Medicine, treats and injects a generous Egyptian child with “Zolgensma”, which is the most expensive drug in the world, with a value of 2.125 million dollars, equivalent to 34 million Egyptian pounds.

Prof. Dr. Mahmoud El-Metini explained that this drug is the first gene therapy of its kind in the world that is given to the patient by intravenous injection for one time only, and it was approved by the US Food and Drug Administration in May 2019.

EL-Metini, praised the efforts and efficiency of the medical staff at Ain Shams Specialized Hospital, which includes faculty members and medical staff at the highest level in all specialties, pointing out that since the company was notified of the selection of the Egyptian child, Prof. Dr. Ayman Saleh, Vice President for Graduate Studies and Research, and Prof. Dr. Ashraf Omar, Dean of the Faculty of Medicine, Chairman of the University Hospitals Board of Directors, and Prof. Dr. Ali Al-Anwar, Executive Director of Ain Shams University Hospitals, and Prof. Dr. Hani Aref, Head of the Department of Neurology and Prof. Dr. Walid Anwar, director of Ain Shams Specialized Hospital, and his two deputies, Dr. Muhammad Rizk and Dr. Hisham Anwar, and Prof. Dr. Mona Mukhtar, Director of the Neurology Unit, monitored the training of medical staff to prepare the child for the injection process, and training on the method of injection and follow-up, in addition to clinical pharmacology, as the medicine is preserved in a special way and under certain temperatures.

Prof. Dr. Nagya Ali Fahmy explained that the drug-producing company offers 100 opportunities to obtain the drug for free in countries where the drug is not registered, and sets conditions for selecting sick children, including that the child is no more than two years old and that the mutation is in the first gene, and the Musculoskeletal Diseases Unit in medicine Ain Shams submitted 8 cases of injured children. Last March, the company chose the case of the child “Rayan” from Alexandria Governorate, to be the first time in the Arab Republic of Egypt that a person with muscular dystrophy was injected with this drug, and due to the success achieved by the medical staff at Ain Shams Specialized Hospital. For the first time and the trust of the drug producer, the case of the child Aser was chosen for injection with the most expensive drug in the world for the second time in a row.

Dr. Nagia confirmed that Prof. Dr. Mahmoud El-Metini, President of Ain Shams University, provided full support to finish the procedures for accessing the drug, as he communicated with the Minister of Finance and the President of the Federation of Medical Professions, to facilitate customs release and exemption from taxes and stamps estimated at 1.750 million pounds. Novartis International and Novartis Egypt also contributed to providing training support for doctors on How to give treatment to the patient, as it facilitated the procedures for transferring the treatment to Egypt at a cooling temperature of (-80) degrees Celsius.

Regarding recovery rates with this drug, Dr. Nagia Fahmy confirmed that spinal muscular atrophy of the first and second types leads to the inevitable death of the child during the first two years of his life as a result of respiratory failure. The child is placed during normal growth, but the improvement is gradual in stages, during which physical therapy and pulmonary rehabilitation therapy are conducted.

Regarding the case of the first child, Ryan, Dr. confirmed. Survivor, that since the child was injected with the genetic drug, he has been followed up over the past months to check on all organic functions, through an integrated team of natural medicine specialties, heart, genetics, chest and orthopedics at Ain Shams Specialized Hospital, in addition to the musculoskeletal and neurology unit team, which will also happen with the case of the child is captivating.

About the possibility of making this drug available in Egypt, Dr. Nagia Fahmy said that there are hundreds of children with spinal muscular atrophy patients who will benefit from this drug, but its costs are beyond the capabilities of individuals, pointing out that the unit of musculoskeletal diseases, which was established 25 years ago in Ain Shams Medicine, was able to provide services that did not exist in diagnosis and treatment, and the unit seeks to Egypt will have a center for research and clinical and clinical trials on genetic and hereditary diseases, which will provide treatment in Egypt at an acceptable price, especially with the direction of pharmaceutical companies, including the Egyptian ones, for research in this field.