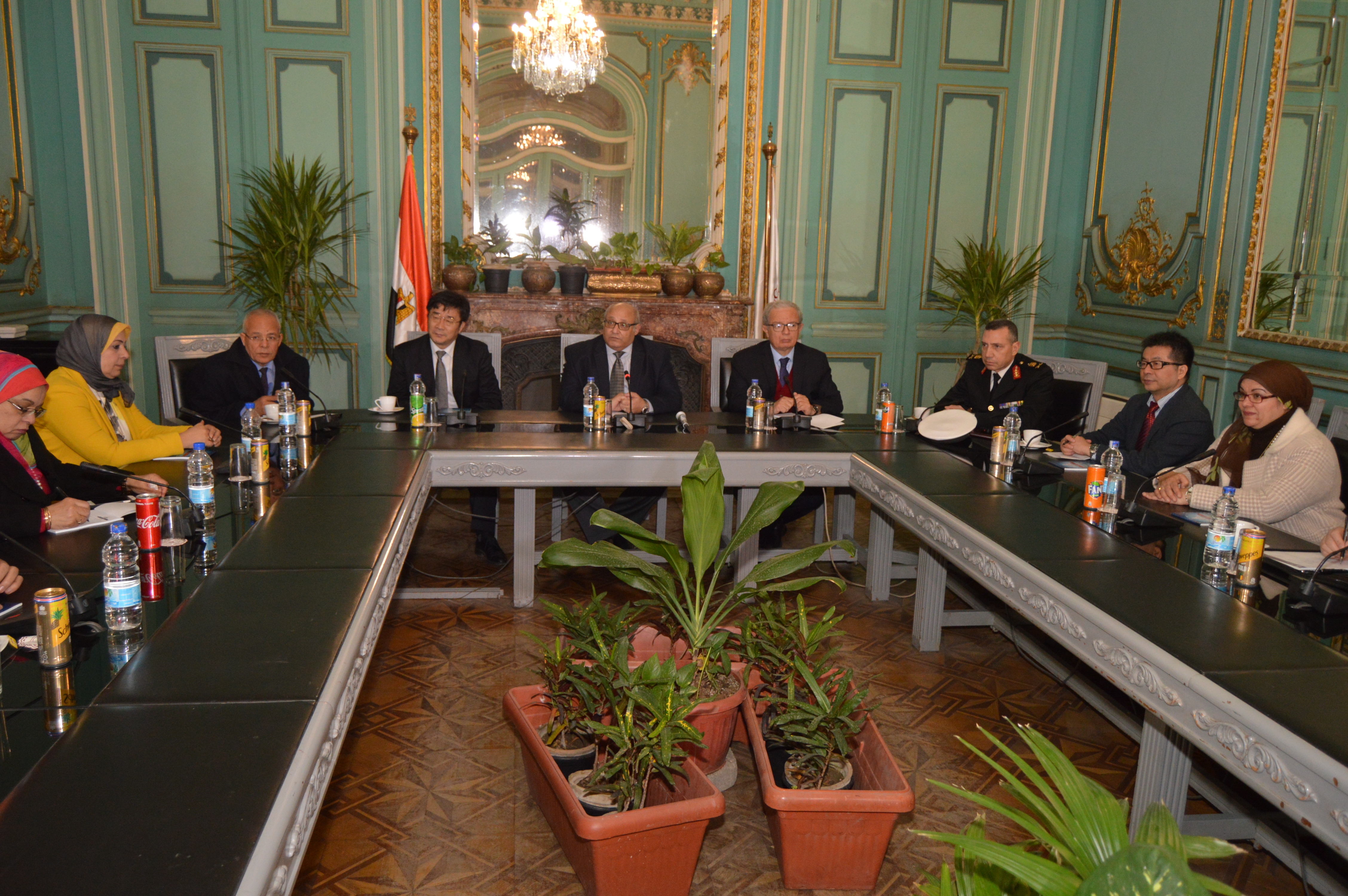 The first opening meeting of the Silk Road Research and Studies Center was held at Al-Zafaran Palace. It was in the presence of Prof. Dr. Abdul Wahab Ezzat, President of Ain Shams University, Liu Wei, president of the People's University of China, Dean of the School of Development and Strategic Studies, People's University, Prof. Dr. Hussein Essa, Chairman of the Budget Committee in the House of Representatives, Prof. Dr. Nagi Abdul Moumen, Dean of the Faculty of Law, and Major General Director of the Military Technical College and Prof. Dr. Esraa Abd El-Sayed, Director of the Office of International. Prof. Dr. Heba Shaheen, Director of Media Center at Ain Shams University and Mr. Ahmed Al-Saeed, Director of "House of Wisdom for Cultural Investments in Egypt".

Prof. Dr. Abdul Wahab Ezzat stressed that Ain Shams University is not only represented in this project, but also by all academic research institutions in Egypt and Africa.

He explained that Ain Shams University seeks to mobilize the available resources and communicate with the largest number of Egyptian, Arab and African universities to participate in this project.

He reviewed the formation of the Board of Directors of the Silk Road Studies and Research Center. It  includes in its membership: Prof. Dr. Hussein Essa, Chairman of the Committee on Planning and Budget in the House of Representatives and Prof. Dr. Nagy Abdul Moumen, Dean of the Faculty of Law, and Major General Dr. Gamal, Director of the Military Technical College, Prof. Dr. Ayman Ashour, Dean of the Faculty of Engineering, and Major General Hamdy Badin. Prof. Dr. Hussein Essa tackled a number of key axes of the Center's work plan, which are based on collecting and documenting the most important researches written through silk. The aim is to prepare a complete information base, cooperation with all official bodies interested in the Chinese affairs, as well as holding conferences, depth relations between the two countries and to consider Egypt as an ally and strategic partner. He explained that the practical recommendations will be put in place with the development of a time plan for their implementation.

He pointed out that the center will carry out two types of studies, which are prepared in advance, as the Silk Road includes 63 European, African and Asian countries, pointing out that these studies will be presented to the decision makers in both the Egyptian and Chinese countries. The other type of studies is the feasibility studies that will accompany Chinese projects in Egypt, as well as external entities that will cooperate with China both inside and outside Egypt.

President of the People's University of China pointed out that the perception of Prof. Dr. Hussein Essa, corresponds to the Chinese view on the center, explaining that a lot of meetings were held during the visit of Prof. Dr. Abdul Wahab Ezzat, President of Ain Shams University to China. The agreement on the immediate implementation of the exchange of students between the two universities was confirmed and agreed to provide all the rapid support for joint research to take effect as soon as possible.

The President of the People's University stressed that the establishment of this center greatly serves the plans of the two countries in the first place, adding that we have absolute confidence in this center because of the potential of human and scientific stature.

After the meeting, the two sides exchanged shields, photographs and souvenirs.