During its ninth scientific conference: Ain Shams University stimulates the energies of its youth searching of fourth-generation universities 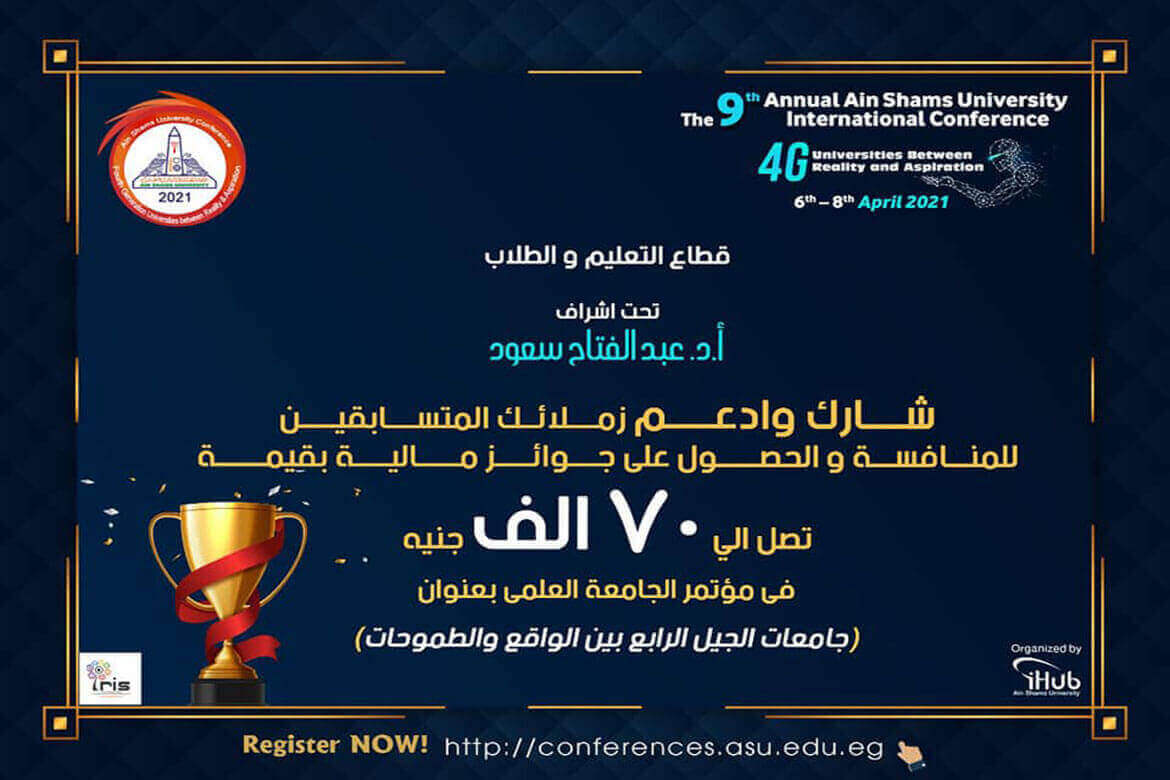 During its ninth scientific conference: Ain Shams University stimulates the energies of its youth searching of fourth-generation universities

Considering the university student as a partner in building the present and changing the future for the better; it pushes us to change our philosophy of dealing with students as part of the development system and not just recipients, this was confirmed by Prof. Abdel Fattah Saoud, Vice President of Ain Shams University of Education and Student Affairs, speaking about the education sector agenda and students participating in the ninth scientific conference of the university, which will be launched this year under the title “Fourth Generation Universities between Reality and Aspiration,” under the auspices of Prof. Dr. Mahmoud El-Metini, president of Ain Shams University, from 6 to 8 of April.

Prof. Abdel Fattah Saoud said that the education and students sector participates in the university conference this year with a different vision that puts the student in the first rows to be an active and influential party in all the activities to be held within the conference activities, for the first time, several competitions are held for students through the University's Center for Innovation and Entrepreneurship, ihub, which aims to mobilize the energies and creativity of university youth in a way that contributes to creating a unique academic environment capable of positively influencing one way or another on the nature of the educational process and making the university stage a step on the road towards entering strongly For the labor market and working life, it also stimulates the university’s efforts to shift towards a fourth-generation university

Through competitions that include three tracks, namely (the medical track competition that deals with the simulation model, the innovation track contest, and the educational and social sciences track contest), students participating in each of the three tracks of the competition present a simulation model for the role that could be Each faculty undertakes the transformation of the university into a fourth-generation university, and the jury consists of directors of the Innovation and Entrepreneurship Center offices in each faculty and institute of the university.

Prof. Abdel Fattah Saoud added that huge prizes have been allocated to students who win competitions, with total prizes of up to 70 thousand pounds, provided that the results will be announced in the closing session of the first day of the conference, which has been fully devoted to the agenda of the education sector and students, and its activities begin at nine in the morning next Tuesday corresponding to April 6, in the university's grand conference hall, until 4:00 PM that day.

On the most prominent sessions and participants in the activities of the first day of the conference, Prof. Abdel-Fattah Saoud said that there is a great diversity of topics for discussion, among which is “Fourth Generation Universities from a cultural and creative perspective,” in which Mr. Hisham Azmy, Secretary General of the Supreme Council of Culture, speaks, also Prof. Dr. Sherif Hammad, former Minister of Scientific Research, discusses specifications and nature of fourth-generation universities , and Prof. Dr. Majed Ghanima, Director of the Center for Innovation and Entrepreneurship, reviews Ain Shams University's vision to support the university's innovation and entrepreneurship system, and other topics will be discussed over the course of 12 sessions, in addition to the opening and closing sessions.

For more information about the activities of the ninth scientific conference of Ain Shams University over its three days, please follow the following link: