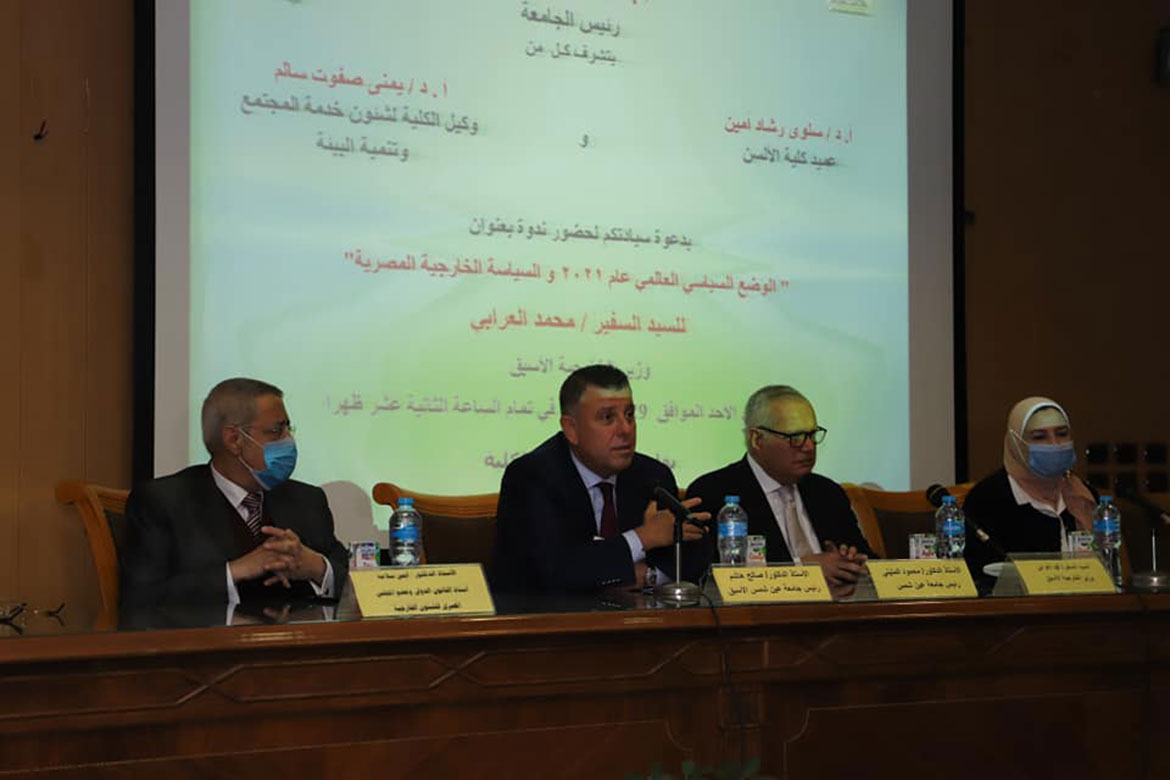 Prof. Dr. Mahmoud El-Metini, President of Ain Shams University, inaugurated the activities of the symposium on "The Global Political Situation in 2021 and the Egyptian Foreign Policy", organized by the Community Service and Environmental Development Sector at Faculty of Al-Alsun, in the presence of the former Foreign Minister Ambassador / Mohamed El-Orabi, accompanied by Ambassador Hadi Al-Tunisi, Prof. Dr. Saleh Hashem, the former president of the university, Prof. Dr. Salwa Rashad, Dean of Faculty of Al-Alsun, Prof. Dr. Youmna Safwat, Vice Dean for Community Service and Environmental Development, Prof. Dr. Ayman Salama, Professor of International Law, the Vice Deans of the Faculty, and a group of faculty, staff and students, while taking all precautionary measures to maintain the safety of attendance.

Prof. Dr. Salwa Rashad, Dean of the Faculty of Al-Alsun, said that developing the student’s personality has become an imperative today. The university’s administration is also working to integrate interdisciplinary specializations, especially languages, with specialties of psychology, to improve students ’personalities and prepare them to engage in diplomatic work, as well as many other disciplines in the labor market.

During his speech, Prof. Dr. Mahmoud Al-Metini, President of the University, noting that the world today is going through a defining moment We find that political changes have become very quickly affected by the spread of the new Corona virus "covid-19", and the global distress caused by that global epidemic. This dark phase was followed by the American presidential elections and the change of the global political scene with amazing speed.

He continued, stressing that the rapid period that we are going through will witness an increase in speed. Therefore, the need has become urgent to raise the educational levels of students at all levels, and to spread awareness among them about the developments in global affairs witnessed by the regions of the world.

He pointed out that the university, during the past short period, concluded a cooperation protocol with the Institute of Diplomatic Corps of the Ministry of Foreign Affairs, aimed at merging the various disciplines under the umbrella of the Egyptian Ministry of Foreign Affairs. To create a new generation of graduates who are able to represent Egyptian politics in various international forums, and he emphasized that Al-Alsun Facultystudents, with their global languages, are able to interact with that protocol and prepare themselves to join the Ministry of Foreign Affairs carrying diplomatic sciences and international languages ​​to address the peoples of the world and work on the success of the Egyptian foreign policies across the continents of the world.

During his speech, His Excellency the former Foreign Minister, Ambassador / Mohamed Al-Orabi, addressed several political variables through which he revealed the features of the global political situation in 2021 and beyond, in the forefront of which was that political life is now changing every 10 years after it changed after 25 years. He indicated that the repercussions of the global political scene led to the reduction of the effectiveness of the central state, and he also indicated that one of the most important variables now is the reduction of the effectiveness of the regular armies with heavy armaments and that they have become dependent on light, easy-to-move units with effective tactical systems in resolving military matters.

He refered to terrorism in the nineties of the last century and the extent of its development today and the possibility of its transmission across borders more easily, and denounced the state of affairs in our region today. Pointing to one of the occupied neighboring countries from eight different armies, stressing that these matters obligated countries to look at their national security from outside their borders, pointing to the large number of military bases for different countries in the neighborhood.

He stressed that the spread of strategic alliances causes difficulty in healing the rift for the region as a whole, as well as the tactical relations between a number of countries to facilitate or to ignore the passage of some terrorist elements from them to other countries, which puts us in front of a new challenge.

At the end of his speech, he stressed that what was created on earth will remain on earth. This means the difficulty of eliminating many terrorist entities that have been planted in the Arab world.

In conclusion, the symposium witnessed the faculty members, the assisting body and students directing a large number of questions to His Excellency Minister Muhammad Al-Orabi, who expressed his gratitude for the level of the questions asked and discussions took place around them.