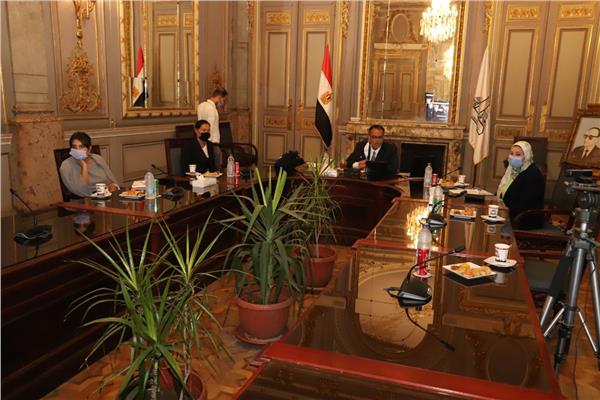 Under the patronage of Prof. Dr. Mahmoud El-Metini, President of Ain Shams University, Prof. Dr. Abdel-Fattah Saud, Vice President of Ain Shams University for Education and Student Affairs, held an expanded meeting with the Portuguese Ambassador, Manuela Franco, through video conference, in the presence of Prof. Dr. Salwa Rashad, Dean of Faculty of Al-Alsun  at Ain Shams University, Prof. João Neves is a member of the board of directors of the Camoes Institute, Prof. Isabel Margarida, Professor at the University of Porto, and Prof. Roy Faz, professor at the University of Porto, Dr. Erma Gonzalez, the visiting instructor of the Portuguese Language Department of the faculty.

Prof. Dr. Abdel-Fattah Saud, Vice President for Education and Student Affairs, emphasized the role of Faculty of Al-Alsun in embracing various civilizations within its walls, and explained that the activation of the Portuguese Language Department came in accordance with the directives of His Excellency President Abdel Fattah El-Sisi, President of the Republic, by extending bridges of cooperation with the friendly country of Portugal and a large number of Latin American countries who speak Portuguese, apart from a number of African countries that speak Portuguese as a first language.

As Prof. Dr. Abdel-Fattah Saud, Vice President of the University for Education and Student Affairs, reviewed what has been accomplished on the ground during the past period, regarding the situation in the Portuguese Language Department, which was activated at the beginning of the last academic year according to the Memorandum of Understanding signed between Ain Shams University represented by Faculty of Al-Alsun, University of Porto, and Camus Institute for Cooperation and Languages ​​in Portugal.

Saud indicated that communication with the Portuguese side is very important, especially after the repercussions of the new Corona virus around the world, pointing out that today we are experiencing difficulty in accessing Portuguese professors, so the need to use the Internet in the educational process has become urgent during the stage Next, he stressed the need to establish a specific mechanism to supply the department with academic professors during the coming period, online.

The discussion also touched on the mechanisms of launching a branch of the Camoes Institute at Ain Shams University, after the success of the project to establish the Portuguese Language Department at Faculty of Al-Alsun.

Prof. Dr. Salwa Rashad, Dean of the Faculty of Al-Alsun at Ain Shams University, indicated that the interest in the Portuguese Language Department comes at the center of the college administration's attention, due to the importance of the Portuguese language and the distinguished political and economic relations that link Benin Egypt, Portugal and Portuguese speaking countries, and it is expected that the graduates will meet This section is the urgent need for the labor market in Egypt, especially in the field of translation, tourism and investment companies related to this specialization.

Prof. Salwa Rashad explained that the training process can take place through the college platform for the Egyptian trainees who teach in the department to compensate for the inability to attend visiting professors from Portugal during that period.