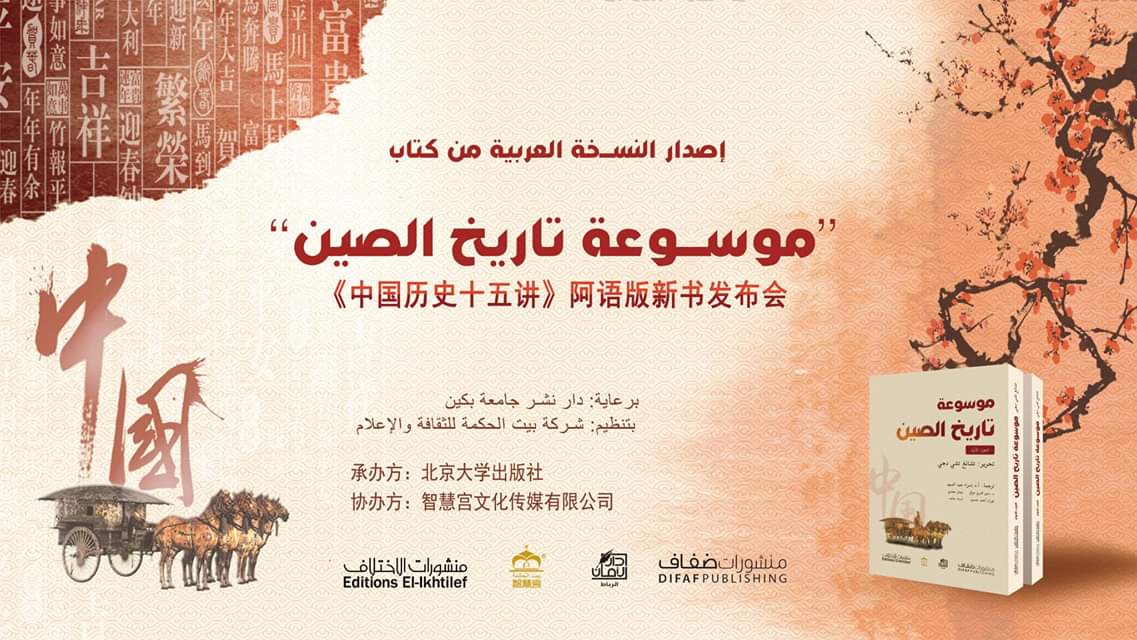 The House of Wisdom for Culture and Information, in collaboration with the University of Beijing Publishing House and the Algerian Diaries, organized a major celebration on the sidelines of the Algiers International Book Fair to celebrate the publication of the Arabic edition of the book "Encyclopedia of China's History" The famous Chinese educational thinker and educator.

The translation was carried out by a distinguished team from the Department of Chinese Language at the Faculty of Al-Alsun under the chairmanship and supervision of Prof. Dr. Esraa Abdel-Said, a chinese professor of Chinese history and a translator of the Arabic version of the book "Encyclopedia of China's History", a professor of the Chinese language department at Al-Alsun College and a Confucius director at Ain Shams University and a head of the Chinese language department at the Cairo International Language Institute.

Dr. Esraa said that the encyclopedia is characterized by the use of simple language in the narrative of the historical turning points in Chinese history since the Chinese legend "Bangu separates the sky from the earth" and even the development of China to today.

She  also focused on the history of ancient Chinese times; its themes included: the origin of civilization, changing dynasties, a view of the heyday of the Han, Tang and Qin dynasties, the ancient transportation movement, the civilizations coming from abroad, the relations between Chinese nationalities and ethnicities, The politics of the selection of ancient officials, the fields of agriculture, handicrafts, industry, commerce, military order and thought, social life, intellectual development, history of art and literature, science and technology, modern history, republican history.

The book "Encyclopedia of China's History" sheds light on important points in China's history. It clearly features content and smooth classification, explains deep theories using simple language, and design the innovative structure of the chapters and sections of the book. We see the value of civilization through history and see the evolution of history through civilization. In addition to its scientific disciplines, it enables the reader to better understand China's history without feeling monotonous, thus making foreign readers more accessible to other cultures than Chinese.

She pointed out that this book not only presents the spread and development of Chinese civilization; it also includes developments and changes in various fields such as politics, economy, science, technology and others.

The introduction of such a valuable encyclopedia of information about China's history to the Arab reader is undoubtedly a very difficult task; it required not only a solid foundation in both languages but also a need for more understanding and understanding of China's history.

A wide audience of Algerian readers, publishers and Chinese officials, as well as the President of the People's University Publishing House and Professor Hussein Ismail, a Chinese expert, attended the event.

The book "Encyclopedia of China's History" has been translated into Russian, Korean, Vietnamese and Kyrgyz languages and other publications published in various languages, which received the welcome and admiration of readers in that country.