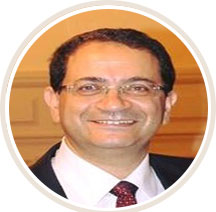 Diaa Khalil is a professor of photonics at the Faculty of Engineering, Ain Shams University since 2004, and received his doctorate from INPG France in 1993.

Dedicated his life for his sciences as he has over 35 years of experience in micro-photonics systems, including integrated optoelectronics and micro-electromechanical systems technology.

He was not stingy with his knowledge and experience, so he offered courses in integrated optics, micro-electromechanical systems, and applied optical engineering to graduate students in engineering.

He also leads a group of scholars working in the fields of optical microsystems, in addition to supervising more than 30 master's and doctoral theses in the fields of: optics, optoelectronics, applied spectral analysis, micro-electromechanical systems and integrated optics, and he has judged more than 30 master's and doctoral theses, as well as he refereed more than 50 scientific thesis and research.

Dr. Khalil is the author and co-author of more than 383 publications in international journals and conferences, as well as 3 book chapters and 1 e-book produced by SPIE.

His productions and creativity have no limits, as he is the inventor of about 16 international patents granted and more than 10 other patent applications, along with his classification in 2021 among the 36 university scientists included in the Stanford list of the best 2% of world scientists.

Prof. Diaa Khalil is also the Chief Technology Officer of the MEMS Optics Department at Si-Ware Systems, and leads a group of talented engineers developing the innovative FTIR MEMS Spectrometer, a unique product that received the Prism Award at Photonics West 2014 in SF, USA.

Prior to joining SWS, Dr. Khalil worked with MEMScAP as Head of the Optical MEMS Design Group where he led the design and characterization of a 2×2 switch, and introduced VOA (Variable Optical Attenuator) setting the world record for minimum PDL with a wide dynamic range reported.

Professor Diaa Abdel Mageed Mohamed Khalil is the General Supervisor of Innovation and Creativity at Ain Shams University at the present time, and in 2019 he held the position of acting Dean of Ain Shams Engineering, and in 2018 he assumed the position of Vice Dean for Graduate Studies and Research.

Professor Diaa Khalil received the Egyptian Excellence Award from 1979 to 1984 at the Faculty of Engineering / Arab University, the Young Scientist Award at the URSI Conference, Lille France 1996, the Egyptian State Motivational Award in Engineering Sciences in 1998, and he is a recipient of the SPIE educational grant in 2007, and was nominated by Ain Shams University for the Egyptian State Award for Excellence in Advanced Technological Sciences for the year 2008. He also received the Prism Award for the best optical components products at the Photonics West 2014 conference. Finally, in 2021, he received the State Appreciation Award in Engineering Sciences.