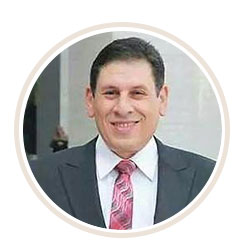 He gained number of awards inside and outside Egypt

He is a history of scientific and administrative granting, his mark overextended Egypt until he became one of the world well-known scientists in the field of pharmaceutical innovations, he is Prof. Dr. Abd El-Nasser Sengab

Abd El-Nasser Badawy Sengab graduated in May 1983 from Zagazig University. He continued his scientific and excellence path to obtain the master’s degree in Sciences from Al-Azhar University in the specialization of pharmacology in 1990, then obtain the doctorate degree in May 1996 from Ain Shams University.

He continued in the administration progression until the Prime Minister, Engineer Sherif Ismail, issued a decree of appointing him as Vice President at Ain Shams University for Post-graduate Studies and Research Affairs in May 2017 until his legal age of retirement.

Administration progression and supreme positions that Dr. Abd El-Nasser Sengab has reached were no reason for him to be away from the scientific giving. He was, as usual, keeping the pace with the scientific development path as he gained several awards and recognitions from university leaders; such as: the best researcher award in Meiji University for pharmacy in Tokyo, Japan in 1994; Excellent Research Award from Ain Shams University year 1998/1999 for the research submitted under the title “Acetylated Flavonol Triglycosides from Ammi manual; a statement of gratitude from Prof. Dr. Hisham Saleh, President of the University back then, for being distinctive in the administrative work performance, discipline throughout the period of heading the department, and detecting a forgery case in the primary class student files; awards of international publication in most of the editions; and the State Appreciation Award in medical sciences in 2020.

These awards were not enough for Dr. Abd El-Nasser Sengab, so he kept researching and following up until he was chosen for two consecutive years, 2020 and 2021, among the list of the best influential world scientists on the international level in different scientific fields, upon Stanford University classification in cooperation with Dutch Ambassador Foundation.

Dr. Abd El-Nasser Sengab also has around 150 published international researches and two books in the field of pharmacy and pharmacology. He also gained a patent in medicine discovery.

Prof. Dr. Abd El-Nasser Sengab was chosen as a member in the research council of Ain Shams University since 2020.

A scientific giving path is provided by Prof. Dr. Abd El-Nasser Sengab which will remain as a history witnessed by successive generations.