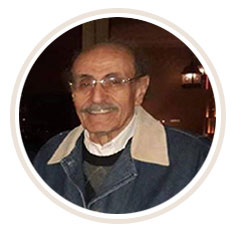 His dream was to advance in scientific research in Egypt, create research that did not exist at Ain Shams University, and supervise studies that keep pace with international and global research, and he still aspires to reach a researcher comparable to the level of the foreign researcher in terms of his capabilities and the conditions available to him... He is Prof. Dr. Mohammed Hassan Talaat.

Prof. Dr. Mohammed Hassan Talaat is one of the first to introduce the unit system at Ain Shams University, where he started the work of the laser technology unit, which he supervises in a joint project with the National Science Foundation in the United States of America, which is the largest science institution there. That was in the late seventies, when he began to develop laser research in the Physics Department, and the unit's research was the pioneer in Egypt in this field.

Dr. Talaat's goal in creating this unit is to prepare researchers in Egypt and bring them to the global level, to be able to compete in research and international publication.

Dr. Talaat also introduced laser applications in metal plasmas (now known as plasmonics), as well as introducing the use of Raman spectroscopy, and also developed Ramen scattering studies in the unit, and these researches are concerned with the detection of molecules, and he was one of the first Egyptian scientists to introduce nanometric and nanotechnology research.

He dealt with research related to the optical sound spectrum, and thermal light in the unit of laser and nanotechnology technology, and doctors use this research to detect and characterize patients’ cases, especially diseases that need to follow treatment. This research also helps with internal imaging of organs to help the patient and the doctor, especially in terms of knowing the effects that occur during treatment.

Dr. Hassan deals with laboratories in the United States and Germany that conduct research in the same field. Dr. Hassan also cooperates with Dr. Mostafa El-Sayed in Georgia in research related to solar energy and how to convert it into electrical energy, and the research they are working on is focused on increasing the conversion efficiency.

This research also deals with the identification of the nanometric material used, its properties and the best way to use it. This research can be compared with other research in the field of energy conversion.

It is worth noting that converting solar energy into electrical energy has so far been considered costly compared to the costs of generating electricity with petroleum, petroleum products and natural gas.

Also, Prof. Dr. Hassan Talaat worked on some applied research on the Raman spectrum related to the layers that protect the teeth, and through his research, he provided information that could be starting points for material research in this field for specialists.

In addition to these researches, there are academic studies related to the scientific foundations that attempt to delve into the depth of the phenomenon in order to explain it and increase its use.

Dr. Mohammed Hassan Talaat published many researches in the fields of laser and its applications, in addition to training students who worked in these fields, and reached advanced positions in science, some of which keep pace with global scientific development.

Dr. Talaat seeks to establish a scientific school that combines research that can be applied, such as energy research and early disease detection, and academic research, because both types of research must go in a parallel and simultaneous line, especially since one depends on the other, and he also aspires to find a researcher. At the international level, although it faces some obstacles to achieving this goal, due to the lack of researchers who have focus, determination and ability to investigate compared to international researchers. The reason for this from Dr. Hassan’s point of view may be due to the level of education and the lack of an actual industry that absorbs these researchers and takes advantage of their capabilities, in addition to the researchers’ preoccupation with raising their economic level at the expense of scientific research, in addition to the lack of technical cadres capable of maintaining the equipment available in laboratories and authorities research.

Dr. Mohammed Hassan Talaat recommends that universities, especially the Faculty of Sciences, not be a place for students to graduate, and it is assumed that the number of students should be commensurate with the available industrial job opportunities, and the focus should be on quality and not quantity, as Egypt needs this now.

It is noteworthy that Dr. Mohammed Hassan Talaat holds a Bachelor of Science from Ain Shams University in the class of 1959 and was ranked first in the batch. He was appointed as a teaching assistant at the college for nearly two years and then traveled on a joint mission to the United States in which he continued for a period between obtaining scientific degrees and conducting research. He then conducted some other scientific research besides teaching at two universities in the United States, one of them in Florida and the other in Pennsylvania.

Dr. Mohammed Hassan Talaat received the Science Day award after graduating, and an award from Ain Shams University, which is the University's Appreciation Award in 2007 for a group of scientific research he conducted and the establishment of a new scientific school at the Faculty of Science, and in 2020 he won the Nile Prize for Technological Sciences.