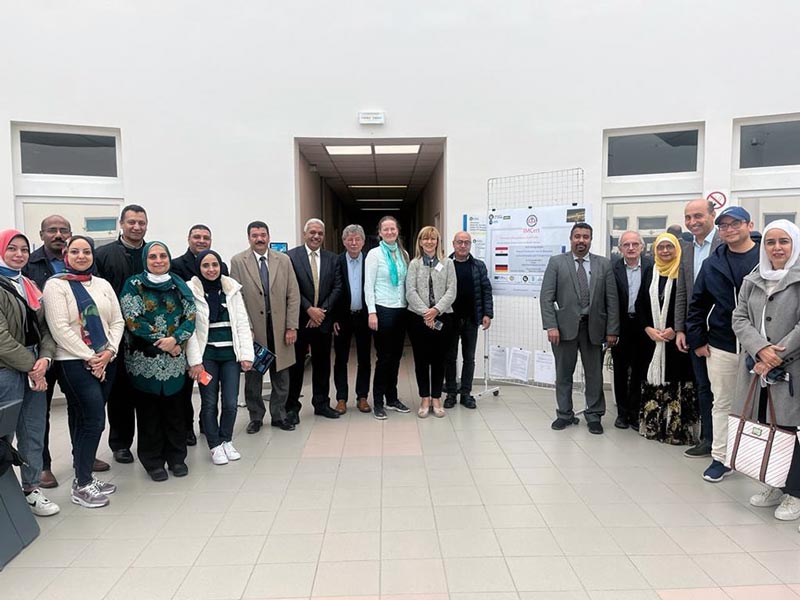 Under the auspices of Prof. Dr. Mahmoud El-Meteini, President of Ain Shams University, and Prof. Dr. Mohamed Ayman Saleh, Vice President of Ain Shams University for Graduate Studies and Research, Prof. Dr. Amani Osama Kamel, the Dean of the Faculty of Pharmacy, the university participated with a delegation from the Faculty of Pharmacy headed by Prof. Dr. Khaled Abu Shanab, Vice Dean for Graduate Studies and Research and Project Coordinator at the university, with the membership of Dr. Ghadeer Al-Husseini, assistant professor in the Department of Microbiology and Immunology, Dr. Sherihan Jalal, assistant professor in the Department of Biochemistry, Dr. Iman Sanad, biochemistry teacher, and Dr. Muhammad Abu Ouf, clinical pharmacy teacher, in a workshop in Metz, France for four days from Saturday, September 24 to Wednesday, 28 of the same month, in the presence of representatives of three European universities, namely the University of Lorient in France, Leipzig in Germany and the National University of Greece.

Several meetings and workshops were held in the presence of Mr. Dr.. Mahmoud Siddiq, Vice President of Al-Azhar University for Graduate Studies and Research, Head of the Al-Azhar University delegation, and Prof. Dr.. Mohamed Mansour Farag, the principal investigator for the project, and a. Dr.. Reham Hammad, Head of the Curriculum Development Group in the project, Vice President of Lorient University for Postgraduate Studies and Research, and coordinators of universities, in order to set the guidelines for the scientific content of the program in preparation for the start of the implementation phase and the launch of the diploma program with the European credit system.

It is worth noting that this specialized professional diploma will be accredited by European universities, and also the necessary measures will be taken towards its approval, also by the Egyptian side, in preparation for offering it to the five Egyptian universities, over two semesters, starting from the next academic year 2023-2024.