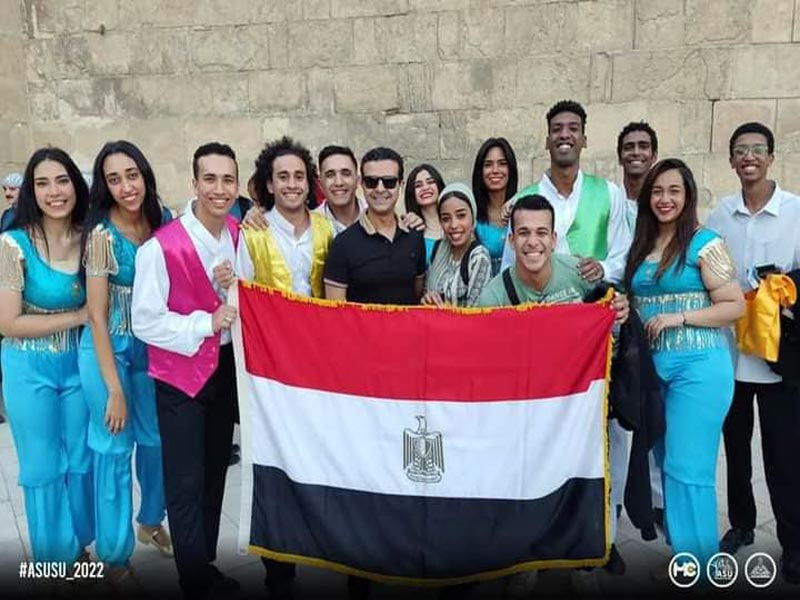 Under the auspices of Prof. Dr. Mahmoud El-Metini, President of Ain Shams University, and Prof. Dr. Abdel Fattah Saoud, Vice President for Education and Student Affairs, the Ain Shams University folklore team participates in the activities of the ninth session of the International Festival of Drums and Heritage Arts, under the supervision of General Prof. Dr. Tamer Rady, Advisor to the Vice President for Education and Student Affairs for student activities, where the Ain Shams University team participates in the activities of the festival, which is hosted on the sides of Al-Moez Street, with a set of artistic tabloids that vary between (Nubian, Saidi, Sinai, African, Modern, Tanoura, Bamboti, Qatar dew). , religious), and the Ain Shams University team is the only team participating in the festival at the level of Egyptian universities, under the supervision of Mr. Muhammad Al-Khatib, Assistant Secretary of the University for the Education and Students Sector, Mr. Muhammad Al-Sharkawi, Director General of the General Administration of Youth Welfare, and Mr. Mostafa Essa, Director of Technical Activity Department.

The participation of the university team comes with 43 teams from more than 13 countries: Tunisia, the guest of honor of the festival, India, Spain, South Sudan, Bangladesh, Yemen, Indonesia, Sudan, Pakistan, Palestine, Mexico, Jordan and Egypt.

The festival’s activities are held in several tourist and archaeological places, including Bir Youssef Square in the Citadel, Hanager Square in the Egyptian Opera House, Prince Taz Palace, Al-Ghouri Dome and Al-Moez Street with the aim of spreading the message of peace, love, optimism and tolerance and that Egypt is a country of security and safety, and the participation of the university team for folk arts continues until the end of the festival activities.