Celebrating the Japanese Cultural Day at Faculty of Al-Alsun 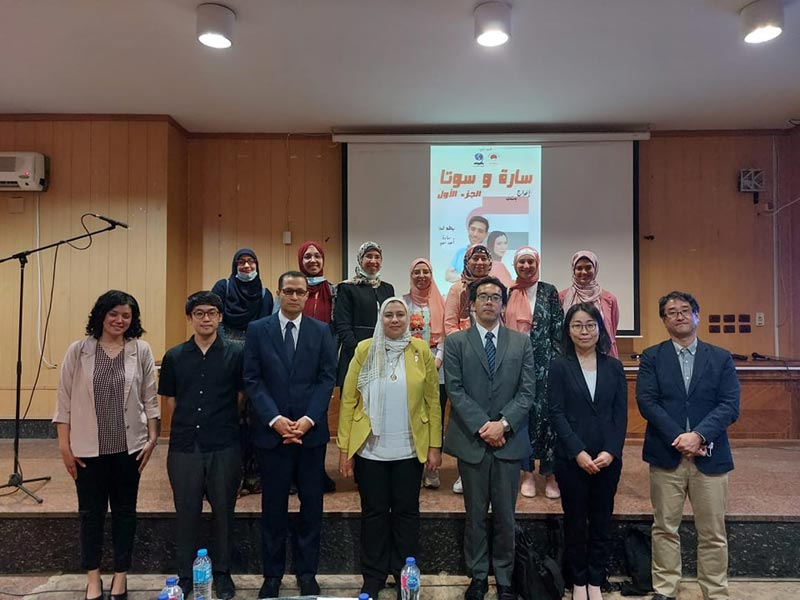 Celebrating the Japanese Cultural Day at Faculty of Al-Alsun

The celebration was attended by:

Dr. Muhammad Abdul Rahman Ashiba, a lecturer in the Japanese Language Department, translated the opening speech of Prof. Dr. Salwa Rashad, Dean of the Faculty of Al-Alsun, from Arabic into Japanese, and Mrs. Marina Baha Habib, assistant lecturer in the department, translated the speech of Ms. Ayumi Hashimoto, Director of the Japan Foundation, from Japanese into Arabic.

Prof. Dr. Salwa Rashad, Dean of the Faculty, welcomed the attendees, and confirmed the keenness of the Faculty of Al-Alsun to celebrate the Japanese Cultural Day.

She also indicated the keenness of Faculty of Al-Alsun to teach its students various languages ​​of the world in addition to teaching Arabic to non-native speakers, in addition to building bridges of cooperation with various European and international universities, and the Faculty is also cooperating with corresponding faculties in various Egyptian universities.

She also confirmed that Faculty of Al-Alsun is one of the oldest Faculties in Egypt, which was established by Rafaa Al-Tahtawi in 1835 with the aim of linking Arab culture with Western culture, in addition to the Arabization of many sciences in an era called the Modern Egyptian Renaissance.

She also indicated that the Faculty of Al-Alsun, Ain Shams University, is the only Faculty at the level of the Republic, which includes 15 departments for different languages ​​of the world.

It was also approved by the decision of the National Authority for Quality Assurance and Accreditation due to its distinguished programs that work to practically meet the needs of the local, regional and international labor market.

The Faculty has also worked during its long history to graduate a large group of distinguished researchers and specialists in the fields of literature and translation.

Also Prof. Dr. Salwa Rashad, praised the Department of Japanese Language, which was established in 2000, where hundreds of distinguished graduates in the Japanese language graduated, who worked during the previous and current period to build bridges of cooperation between the Arab Republic of Egypt and the State of Japan in various fields.

She expressed her happiness for the theatrical and lyrical activities presented by the students of the Japanese Language Department on this day, all of which express an aspect of the ancient Japanese culture. Japanese.

At the end of her speech, Dr. Salwa Rashad thanked the attendees for their keenness to participate in the celebration.