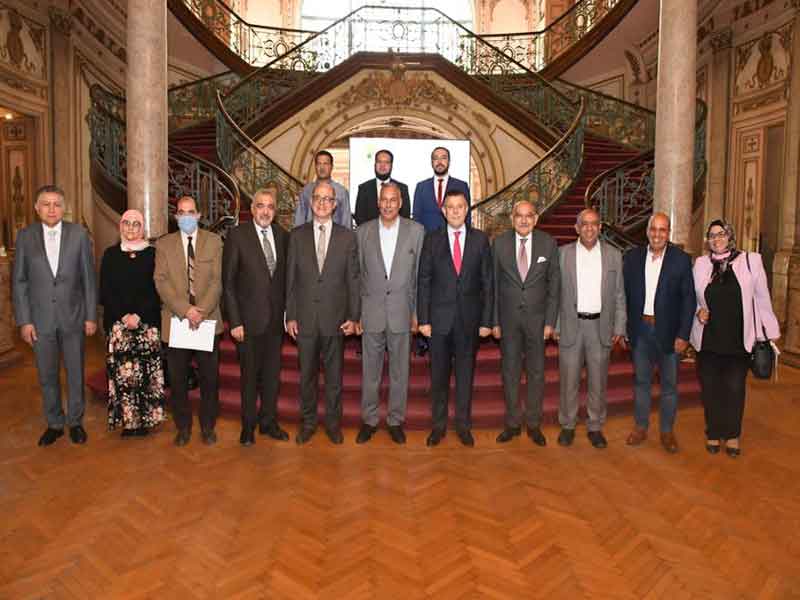 Believing in the pivotal role of Ain Shams University in global, regional and local issues, it took place in the presence of Prof. Dr. Mahmoud El-Metini - President of Ain Shams University, Vice-Presidents of the University and Deans of Faculties (Agriculture - Science - Medicine - Engineering - Pharmacy) and Mr. Engineer / Ismail Mohamed Ahmed - Chairman of the Board of Directors of the Egyptian Gulf Company for the Reclamation of Desert Lands, the signing of a cooperation protocol in the field of jojoba cultivation.

The protocol aims at scientific and research cooperation in the field of jojoba cultivation in Egypt, benefiting from its products in the manufacture of petrochemicals and cosmetics, and extracting some active substances that are used in the medical field, in addition to the optimal use of treated wastewater and saline water, so that Ain Shams University, with its various faculties, is a house of expertise in this field.

The protocol also touched on the work of a joint project between the university and the company to plant 100 acres in the New Valley with jojoba plants as an indicative research model.

The two parties also agreed to present the jojoba project as one of the sustainable development goals at the 2022 International Climate Conference that will be held in Egypt.

Jojoba is considered one of the most promising plants in Egypt that is facing climatic changes. It also helps in optimizing the use of treated wastewater in addition to its resistance to salinity and drought.

A working group has been formed from the various faculties of the university to start implementing the protocol.