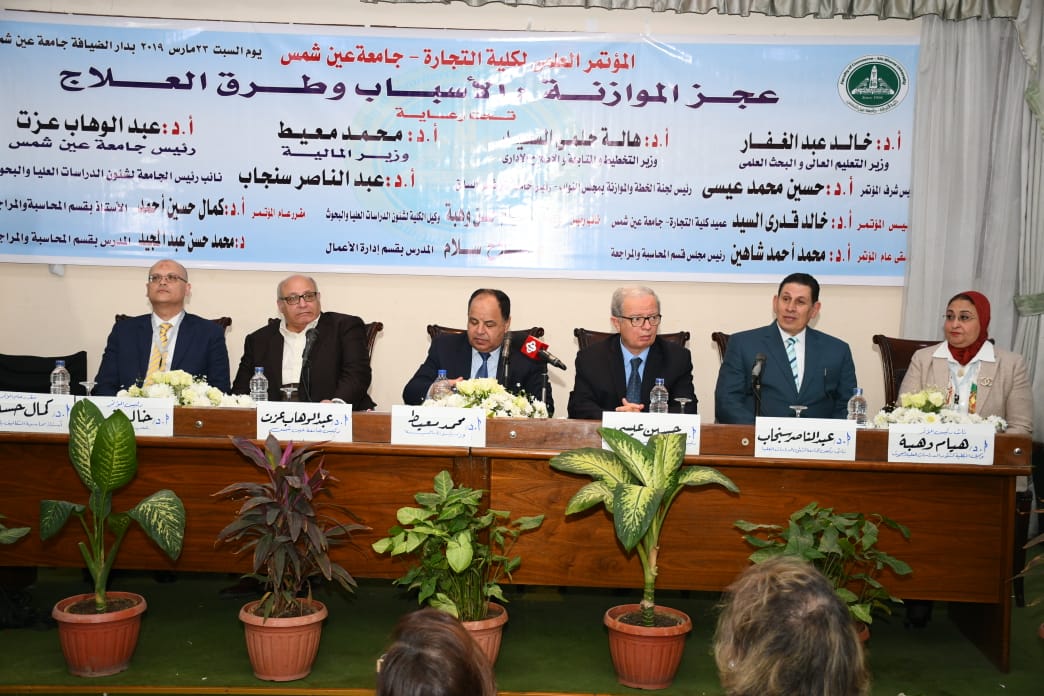 Prof. Dr. Mohamed Moait, Minister of Finance, inaugurated the Scientific Conference of the Faculty of Commerce, Ain Shams University, on "Budget Deficit, Causes and Treatment Methods". The opening was in the presence of the Chairman of the Planning and Budget Committee of the House of Representatives, President of Ain Shams University, Vice President for Graduate Studies and Research, Dean of the Faculty of Commerce and President of the Conference.

Minister of Finance Mohamed Moait said in his speech that economic reform is being made by the people and not by officials, pointing out that they are improving continuously after the emerging markets crisis, which led to the withdrawal of funds from emerging markets, and affected many countries such as Argentina, South Africa and Turkey. The Egyptian economy was able to spread discipline, which encouraged investors to return to the Egyptian market and the intensity of higher than the previous, having proved steadfast against this test.

He pointed out that the budget deficit depends on several factors, especially with regard to the price of fuel, and wheat in addition to the price of the dollar, in addition to debt service and premiums, indicating that when the development of the general budget. These standards are expected, and the unexpected global increase may result from a deficit in Budgeting.

He said that Egypt aims to reduce the budget deficit for the current year to 93% after it was 98% on 30/6/2018, and hinted at the role of investment, which grew by 43% to create jobs aimed at increasing growth.

He added that the decision of Fitch Ratings to raise the credit rating of Egypt to B + with a "stable outlook", compared to the previous classification B, is a certificate of the most important global institution on the success of the Egyptian government's efforts in the implementation of its comprehensive program of economic reform. In addition to increasing the degree of confidence in the capabilities of the Egyptian economy, attract more foreign investment and reduce the cost of financing to the government and the private sector. The new classification reflects the recognition of international institutions of the government's commitment to implement the economic reform program and the efforts exerted by the Egyptian state to sustain the unprecedented and positive performance of Economic and financial indicators.

The Minister of Finance confirmed that this success was achieved thanks to the strong and continuous support of the political leadership of the comprehensive national reform program adopted by the Egyptian government in the medium term. He pointed out that the current phase of the economic reform program is based on moving forward with structural reforms that will sustain economic growth rates in light of improving public financial indicators by maintaining the downward path of budget deficit and debt as a percentage of GDP by maintaining an initial budget surplus Creating a financial space to increase spending on human capital development and high growth rates. In 2018, Egypt achieved the highest growth rate in the Middle East and North Africa.

Prof. Dr. Hussein Essa, Chairman of the Committee on Budget and Budget in the House of Representatives and the former President of the University stressed that the issue of budget deficit is not far from the attention of the House of Representatives for a long time. He praised the awareness of the Egyptian people to the policies of economic reform and its positive role in which failed several countries, Financial and monetary development, to real executive reform.

He pointed out the importance of establishing a center for financial services to our need to provide a variety of research and opinions, especially after the establishment of the Silk Road Studies Center.

Prof. Dr. Abdul wahab Ezzat, President of Ain Shams University, affirmed that the second year of credit rating is a testament to the success of current policies. The international organizations' recognition of the government's commitment to implementing the economic reform program and the efforts exerted by the Egyptian government to sustain the unprecedented and positive performance of economic indicators and finance. He pointed out that the conference includes several research papers of great importance, and expressed confidence that the recommendations of the conference will help greatly overcome this crisis.

Prof. Dr. Abdul Nasser Sengab, Vice President for Graduate Studies and Research, in his speech pointed out the importance of the title of the conference, adding that it concerns every Egyptian interested in the economy of Egypt for its response to the Egyptian citizen. He added that over the four years of the economic reform program and the implementation of a sustainable plan, the Ministry of Finance has set important targets to increase growth and bridge the gap in the budget deficit and high expenditures and lack of revenue, adding that these policies have borne fruit. Also he noted that economic growth must be strengthened, Increase investment funds, increase revenues and diversify sources of income, increase development projects in various sectors for the economic benefits of a country rich in youth cards and minds of intellectuals and innovators in all fields.

He added that the university is in the process of establishing a professional degree in entrepreneurship and its list is derived from Japanese universities.

Prof. Dr. Khalid Kadri, Dean of the Faculty and President of the Conference, explained that the selection of the "budget deficit" to be the subject of our conference this year because it is one of the most important economic problems with direct and indirect effects not only on economic activity but also its social and behavioral and cultural effects on all categories the society. The choice of "budget deficit" is also important in light of the continuing increase in public debt and debt service costs and the consequent effects of higher inflation and unemployment.

He pointed out that although the mechanisms applied by the government have begun to bear fruit and decreased budget deficit, for example during the first five months of the current fiscal year 2018/2019 to 3.1% of gross domestic product. However, there is an urgent need to implement several mechanisms that would reduce the budget deficit, for example diversifying sources of income, reviewing governmental spending priorities, activating the role of governance mechanisms and combating corruption, Reconsidering allocations to the wage item, restructuring support programs and developing the tax system.

He pointed out that the conference discusses thirty research papers over four sessions, all of which seek to diagnose the "budget deficit" and identify the causes and consequences and propose many of the traditional and non-traditional mechanisms.

Prof. Dr. Haiam Wahba, Vice-Dean for Graduate Studies and Research and Vice-President of the Conference, stressed that the selection of the "budget deficit" to be the focus of the conference this year was not coincidental, but in fact comes in the context of Ain Shams University's strategy that seeks to link the axes of the "Sustainable Development Plan and Vision 2030" to the research plans at the level of faculties and institutes of the university.

She pointed out that all these initiatives will work to raise awareness in the society and increase the integration between scientific research institutions, industry and executive bodies, which is reflected in increasing the sources of income and rationalization of expenditure and achieve comprehensive development, which directly affect the reduction of the budget deficit.