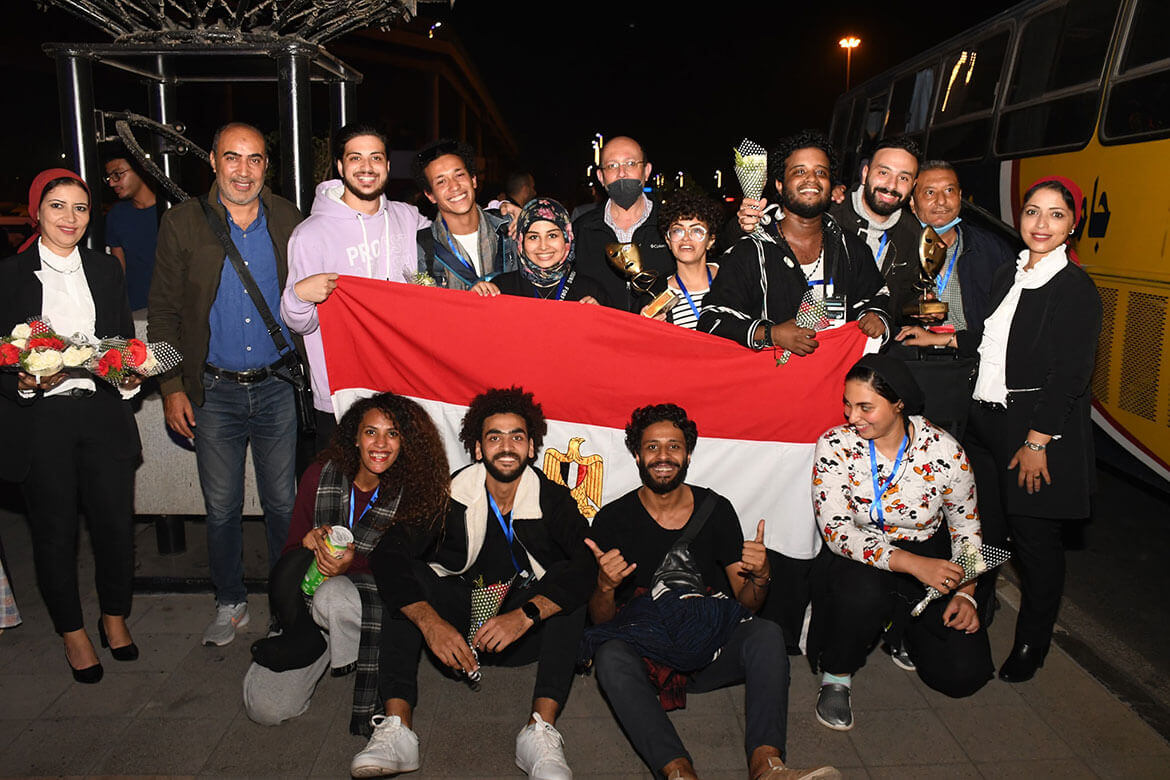 Under the sponsorship of Prof. Dr. Mahmoud El-Metini, President of Ain Shams University and Prof. Dr. Abd El-Fattah Saoud, Vice President for Learning and Students Affairs, Ain Shams University organized grand reception, in Cairo International Airport, for the delegate returned from Morocco after the honorable participation of the fourteenth session of the International University Theater Festival in Tangier, Morocco which was held under the sponsorship of King Mohamad the Sixth, King of Morocco.

The university theater acting team that participated in the festival was able to gain four prizes out of the festival’s eight prizes with the performance “Negative Zero” produced by the General Administration for Youth Welfare of Learning and Students sector.

The reception team in the general administration for public relation of the university presented flowers and congratulating letters from Prof. Dr. Abd El-Fattah Saoud, Vice President for Learning and Students Affairs to the Egyptian delegate participated in the festival under the presidency of Prof. Dr. Tamer Rady, Consultant of Vice President for Students Activities, Prof. Mohamad El-Sharkawy, General Director of Youth Welfare, Mr. Mostafa Eisa, Director of Art Activities Administration and Mr. Ahmed Adel, Theater Supervisor. The team received a direct phone call after the closing ceremony of the festival from Prof. Dr. Abd El-Fattah Saoud to congratulate the students for their achievement and promised them with proper and suitable awarding for all the delegate members for the great achievement in such an international festival.

The student, Islam Khaled, the student at the Faculty of Commerce also won the Best Actor award, and the student Layali Khalaf, the student at the Faculty of Commerce, won the Best Actress award, which is a precedent that is the first of its kind in this festival that the best actor and best actress will be chosen from the same show, and nominations for the Best Actor Awards compete It has three students from Ain Shams University in a unique phenomenon that has never happened before to be the three best actor nominees for the same performance.