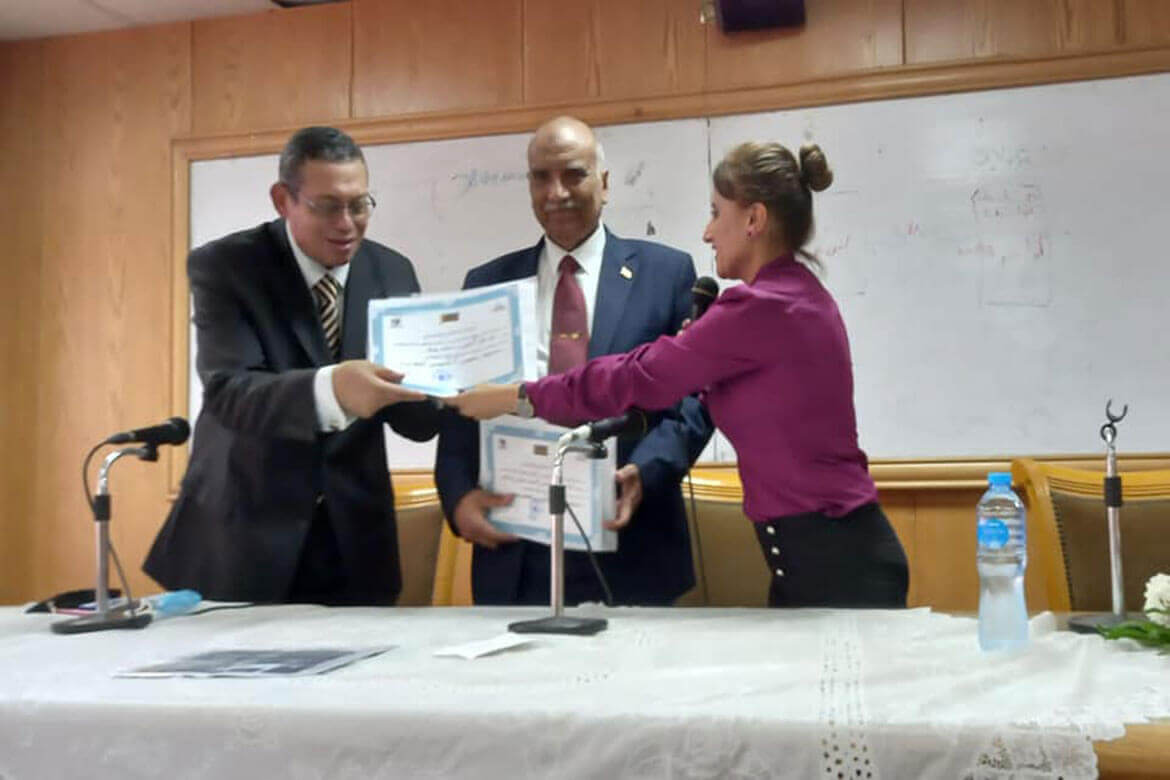 The Cultural Relations Committee of the Graduate Studies and Research Sector at the Faculty of Al-Alsun, Ain Shams University, organized a symposium entitled "October's victories between the past and the future", under the auspices of Prof. Dr. Mahmoud El-Metini, President of the University, Prof. Dr. Abdel Fattah Saoud, Vice President for Education and Student Affairs, Prof. Dr. Ayman Saleh, Vice President for Graduate Studies and Research, Prof. Dr. Salwa Rashad, Dean of the Faculty, Prof. Dr. Ashraf Attia, Vice Dean for Graduate Studies and Research Affairs, hosted Major General Dr. Nasr Mohamed Nasr, head of the reconnaissance squad of the former Egyptian Intelligence and currently the military advisor at Nasser Military Academy, Prof. Dr.. Ayman Salama, Professor of International Law and a member of the Faculty Council from abroad, in the presence of Prof. Dr. Youmna Azmy, Professor of Spanish Language and Head of the Cultural Relations Committee at the Faculty, and Prof. Atef Bahgat, professor of Arabic language, Dr. Assem Al-Ammari, professor of German language and members of the cultural committee in the faculty, and a group of heads of departments, faculty staff, teaching assistants and students.

Prof. Dr. Salwa Rashad, Dean of the Faculty, inaugurated the activities of the symposium, stressing that the celebrations commemorating the great October victories should be held continuously throughout the year, in the context of combating the fierce campaign against the minds of our youth today. In light of the space openness we are witnessing, it presents wrong ideas to our youth and demolishes the national values ​​and principles of the people of the country, noting that the symposium comes within the framework of raising the spirit of belonging to the homeland by hosting honorable models of the heroes of the October victories, and urging students to interact directly with the homeland’s heroes to instill the concept of The love of the homeland in their depths, in addition to the academic role of the Faculty.

While Major General Dr. Nasr Mohamed Nasr, the former head of the reconnaissance apparatus in the Military Intelligence, stressed that the truth is a trust, and whoever does not preserve the trust will not be merciful to history nor the people. Therefore, the conscious youth of Egypt must have more real and documented information about the Egyptian army's victories during the Glorious October War.

He reviewed the strategies for defending the Egyptian state on the moral level, where the determination of Egyptians must be honed, their dignity preserved inside and outside their country and the development of a sense of patriotism within them, in addition to preparing an army capable of protecting the security and interests of the state and its people along the line inside and outside regional borders.

He referred to the second strategy represented in the force of deterrence, which depends on preventing the enemy from thinking once they are exposed to the Egyptian state and its interests, and many points fall under this strategy, most notably the announcement of deals, arming the army, modernizing its capabilities, international maneuvers and training, as well as strategic conquest at various levels to review the extent of its strength and readiness. The military arm of the Egyptian state to achieve security and stability for its interests and to take care of its people anywhere.

During his speech, he dealt with many of the strategies adopted by the Egyptian state at the present time, the most important of which is reconnecting Sinai to the valley after it was cut off from the homeland, pointing out that the Egyptian state allocated 700 billion pounds for the reconstruction of Sinai and the establishment of residential cities, national projects, roads and tunnels linking it to the Egyptian Valley; To achieve the maximum possible benefit from linking Sinai to the motherland, stressing that Sinai, by its nature, represents the largest protective shield from the East against enemy attacks on Egypt, with its natural mountain ranges along its length.

He stressed that during the October 73 war, we were able to achieve the military and political goal, and recover every inch of Egypt's land, and today we are witnessing the development of our defense system and raising the efficiency of armament for the Egyptian army with capabilities greater than the capabilities of the enemy, and delivering a message to any aggressor with the capabilities of the Egyptian army, which is a tight plan of the strategic deterrence plan The Egyptian state, and the seriousness of direct deterrence and the use of these weapons to ensure the firmness of the response.

In the conclusion, Prof. Dr. Salwa Rashad, Dean of the Faculty, honored His Excellency Major General Dr. Nasr Mohamed Nasr, in appreciation of his contributions to the cultural day’s richness in the great October celebrations. His Excellency assured that a copy of the book “180 Days Behind the Enemy Lines” was presented to the faculty library.