The Minister of Higher Education witnesses the activities of the 10th Annual Gastrointestinal, Liver and Uro-Oncology conference 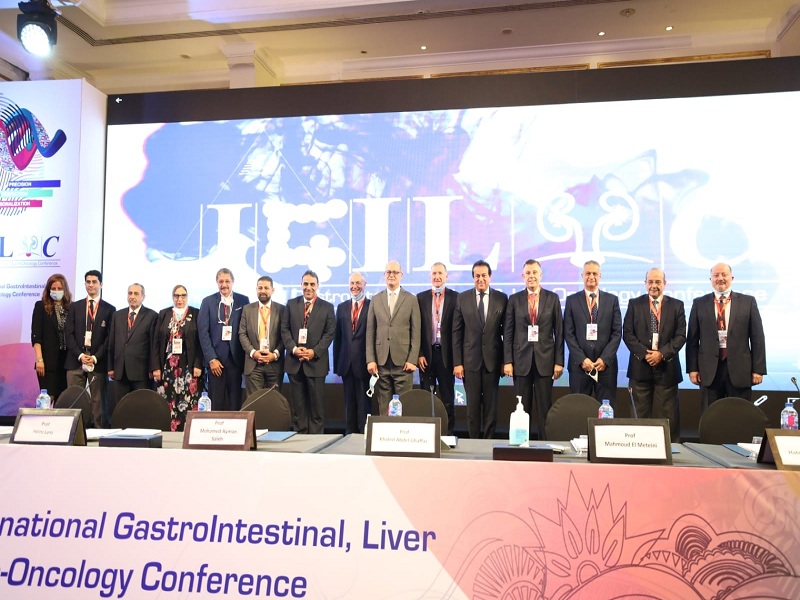 The Minister of Higher Education witnesses the activities of the 10th Annual Gastrointestinal, Liver and Uro-Oncology conference

Prof . Dr. Khaled Abdel Ghaffar, Minister of Higher Education and Scientific Research, witnessed the activities of the 10th annual Gastrointestinal, Liver and Uro-Oncology conferences; to discuss the latest science in the areas of diagnosis and treatment of gastrointestinal, liver and urological tumours, which was organized by the International Society of Gastrointestinal, Liver and Urological Tumors, over two days, from 15 to 16 July, in the presence of Dr. Mahmoud El-Metini, President of Ain Shams University, and Dr. Hisham Al-Ghazali, Professor of Oncology, and Director of the Research Centre at the Faculty of Medicine, Ain Shams University, in a Cairo hotel.

At the beginning of his speech, the Minister praised the efforts of scientists participating in the field of oncology and surgery in this conference in spreading science and pushing scientific research against diseases of the digestive system and urinary tract forward, pointing to the developments in the treatment of liver and kidney tumors during the past ten years, including: A scientific network of specialized scientists around the world, improving the skills and knowledge of young researchers, as well as patient care and treatment outcomes.

Dr. Abdul Ghaffar added that the conference presents a clear and important message by discussing more than 200 scientific papers in 10 different axes, including: tumour treatment and surgery, urological tumour surgery, radiation therapy, scientific research, artificial intelligence and bioinformatics, genetic analysis and tests, and so forth. Which is reflected in the process of developing scientific research in the areas of diagnosis and treatment of diseases of the digestive system and urinary tract, and attracting distinguished scientific models in this field.

On the other hand, Dr. El-Metini praised the efforts of preparing the conference, which lasted for 10 years, noting that these conferences represent a constant challenge for treatment and research in the face of cancer diseases, adding that for the first time this year the use of artificial intelligence, providing accurate information in pathological diagnosis, and determining Expand the treatment plan, which leads to better results at a lower cost.

On the side-lines of the conference, an exhibition of diagnostic and therapeutic devices was held, with the participation of many pharmaceutical companies, in addition to organizing a number of discussion sessions and workshops.

It is worth noting that this year the conference will be held in cooperation with 10 international societies, including the American Society of Oncology and the World Cancer Council, and the participation of more than 100 foreign and regional scientists, led by the world’s largest pancreatic surgeon, Professor Markus Buchler, Professor of Pancreatic Tumour Surgery at Heidelberg University in Germany, and Prof. Heinz Lenz, Professor of Oncology at the University of Southern California, USA, Professor Mac Roch, the world’s largest professor of radiotherapy, and Terry Dauberre, Professor of Interventional Radiology at the Gustave Rosset Institute in France.