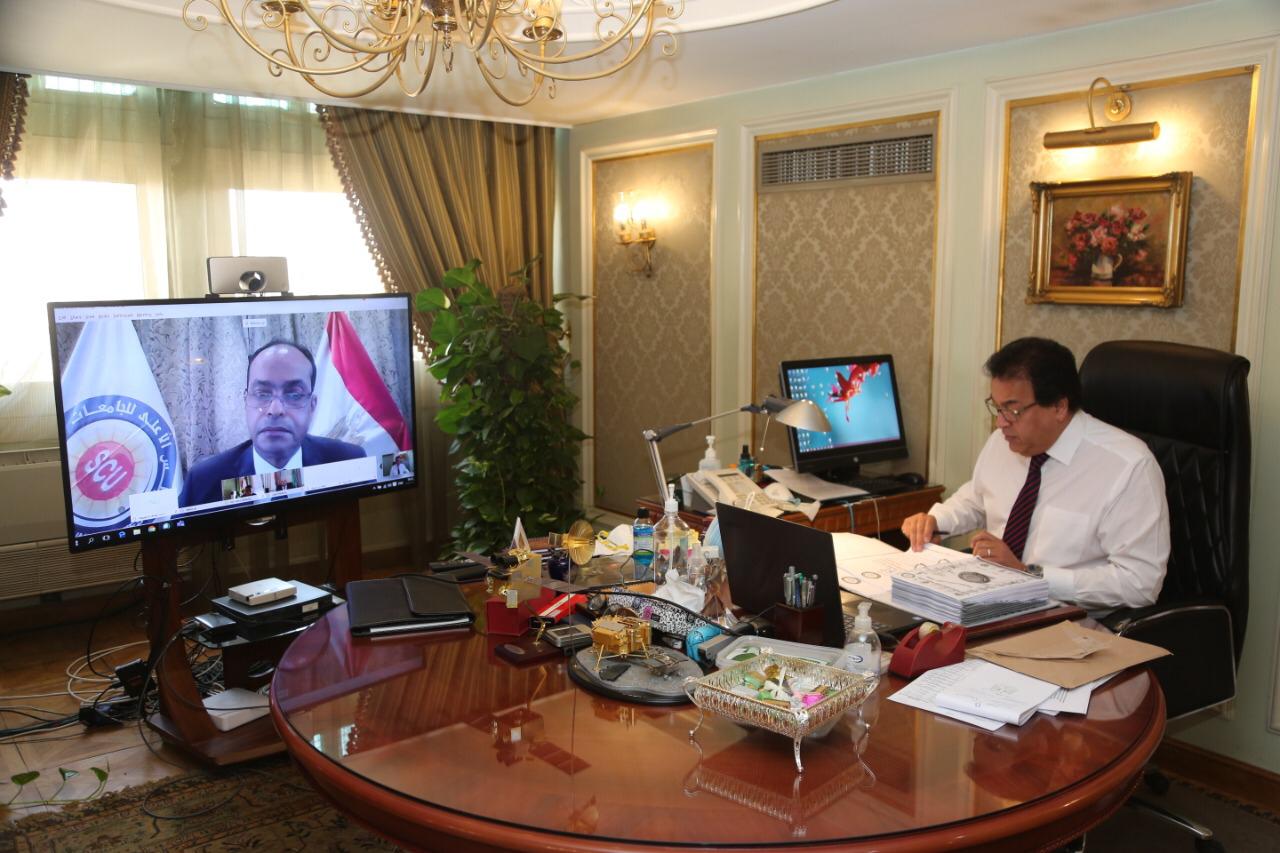 At the beginning of the meeting, the Minister valued the efforts of universities, institutes, and the operations room of the Supreme Council of Universities in following up the exams for the second semester of final year students for the academic year 2019/2020 in universities and institutes, solving all problems and overcoming all obstacles, as well as taking all precautionary and preventive measures, and providing all capabilities for students and all those in charge Ali exams work.

The Council agreed to conduct the ability tests for high school students for the year 2020, and that from Saturday, 8/8/2020 until Thursday, 20/8/2020 for students wishing to enroll in colleges that are required to pass the qualification capabilities tests, to begin Coordination work for the first stage, after completing the ability tests.

The Minister directed to provide the highest levels of insurance for students and gentlemen who are organizing coordination and testing work in colleges, by following all necessary precautions and preventive measures in accordance with the standards of the World Health Organization and the Ministry of Health.

The Supreme Council of Universities approved the time map for the academic year 2020/2020, where study begins in the first semester on Saturday 10/17/2020, and the study continues for a period of fourteen weeks ending on Thursday 21/1/2021, and exams are held at the end of the first semester of Saturday 23 1/2021 to Thursday 4/2/2021, according to the nature of the study and examinations in each faculty.

Provided that the mid-year vacation starts from Saturday 6/2021 to Thursday 18/2021, provided that the second semester of studies resumes on Saturday 20/2021, and the study continues for a period of sixteen weeks ending on Thursday 10 / 6/2021, and the end of the second semester exams will take place during the months of June and July 2021, according to the nature of the study and the examinations in each college.

The Council also approved a proposal to apply hybrid education, which mixes face-to-face education and distance education, which leads to a reduction in student density, and the achievement of the greatest benefit from the experience of faculty and university infrastructure, and a gradual transformation of the student into a lifelong learner, in application of performance methods And to ensure local and international quality, in addition to achieving the greatest benefit from technological capabilities outside the classroom, provided that each university sets the mechanisms and controls necessary to implement this system according to the nature of the faculties and various programs.

On the sidelines of the meeting, Dr. Mahmoud Sakr, President of the Academy of Scientific Research and Technology, reviewed the reports on the current state of the “Science Up” initiative, which comes within the framework of the state’s interest in basic science, building a strong scientific base, and implementing the Ministry’s science, technology and innovation strategy 2030, which took charge of its first strategic goal to create an environment conducive to science Technology, innovation, and building a strong scientific base. During the past period, several programs and initiatives have already been implemented within the framework of achieving this goal. These initiatives have included refining and stimulating the legislative environment supporting scientific research, linking scientific research with industry, the needs of society, and directing Egyptian missions to serve vision goals. Misr Development and the initiative to catch up with emerging technologies and future science.

The Council was informed of the cooperation protocol between the Ministry of Higher Education and Scientific Research and the New Valley Governorate regarding the allocation of an area of ​​one thousand acres or more for each Egyptian university for use in scientific research; to increase the production of acres of strategic crops, with the allocation of an area of ​​five to ten acres per graduate according to the desires of graduates of each university.

The Council was also briefed on the development of scientific journals in Egyptian universities, which led to the inclusion of many of these journals in the data of the science tree (WOS) and journals being included in the Scopus.