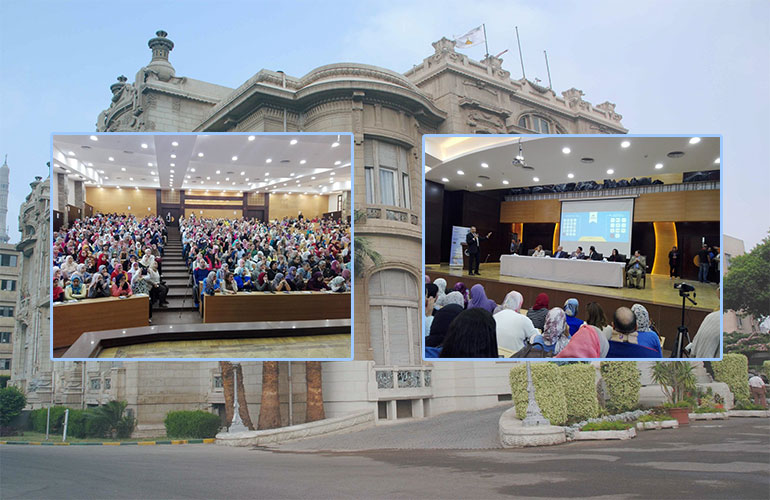 He pointed out that the workshop included a thorough explanation about the services of the Egyptian Knowledge Bank and the developments in it and the researchers' use of the knowledge bank website.

Prof. Dr. Khaled Kadri pointed to the importance of a knowledge bank and the transfer of information and facilitate access to researchers, as it shows the interest of researchers at the University and the Faculty of Commerce in particular the services provided.

He pointed out that the workshop presented a range of applications related to the Knowledge Bank, such as Endnotes.

The Dean of the Faculty of Business stressed the importance of such workshops in raising the university's classification, indicating the progress of Ain Shams University in the indicators of international classification of universities.

For his part, Mr. Mahmoud Daoud, the training and development coordinator of the Egyptian Knowledge Bank, praised the excellent organization of the workshop and its introduction, pointing out that during the past three years, the number of attendees did not exceed 15 researchers, and then the interest began to increase gradually, reaching more than 300 researchers. Last year it reached 700, and today there are 1,400 researchers.

Mahmoud pointed out that there is great support from the Vice President of Graduate Studies and Research for the Knowledge Bank, both during public and specialized workshops.

Daoud pointed out that specialized representatives in all the international publishing houses participating in the Egyptian Knowledge Bank are present in these workshops.

He pointed to the increase in the number of Egyptian universities ranked in the global ranking indicators, which increased from 4 Egyptian universities to 20 universities this year, and that the Egyptian scientific publishing in the world seemed more influential, where Clarifit Analatics Company in its latest statistics that the highest growth rate in Intellectual production worldwide was in Pakistan and Egypt.

In a related context, Dr. Islam Hegazy, Director of the Information Technology Office at Ain Shams University, said that the workshop of the Egyptian Knowledge Bank is important for researchers and faculty members of the university, as a means to familiarize researchers with the services provided by the Knowledge Bank.

Over the past four years, the number of researchers interested in attending the Knowledge Bank workshop has increased to 1400 so far, which indicates the extent to which researchers know the importance of the Egyptian Knowledge Bank and its services.

For her part, researcher Fatima Ayman Abbas, praised the coordination of the workshop and organization compared to last year, pointing to the large number of researchers interested in attending the workshop, and noted that the knowledge bank provides valuable information.

The researcher, Samar Khalid, pointed out that the knowledge bank workshop is one of the important workshops as it provides information on how to enter the knowledge bank, in addition to easy access to the required data and information, praising the appropriate organization during this year compared to previous years.