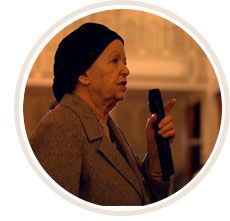 Winner of the L'Oréal UNESCO Award in 2003

One of the founding pioneers in discovering thermal vibrations

She graduated from Ain Shams University and her doctoral research at the University of London achieved important results in the mining industries, semiconductor materials, and medicine. Ain Shams University played a prominent role in determining the relationship of the defect of the atomic structure of materials to the formation of bladder stones, and the cracking of aluminum tumors used for domestic and industrial purposes.

She managed to come up with two inventions that played an important role in scientific research, and her bidding process led to her endeavoring through the crystal structure unit and X-ray diffraction at Ain Shams University to contribute to the development of the industry.

An honorable scientific example for the Egyptian woman, who represented her in various countries of the world and led international scientific federations... She is Prof. Dr. Karimat El-Sayed, a researcher and scientist who grew up in a family that loves science and is interested in developing it and inventing everything that can be new. She devoted her life to science and benefiting the world with what She has learned and educated, striving to pass on her knowledge and experience to future generations. She has received many international and Egyptian awards, among them the most notable of which is L’Oréal UNESCO Award for the year 2003, for inventing a new type of treatment, which is crystal therapy." She headed the crystal structure and X-ray diffraction unit at Ain Shams University.

Dr. Karimat El-Sayed, a professor of crystallography, had many discoveries and inventions that became important in different sciences, including her discovery of the structural composition of kidney stones. just past.

Dr. Karimat was also able to know that the active part of some herbs and natural plants in Sinai changes according to the nature of the soil, and that the concentration of active substances used in some medicines in Sinai plants is more than that of other plants. In addition, she was able in 2003 to discover the structural composition of two types of Sinai plants, and this enables researchers to manufacture a drug that prevents feeding from some viruses, knowing that medicines that adopt this method of treatment cost about 600 million dollars.

Dr. Karimat El-Sayed did not stop helping researchers, students and researchers, as she cooperated with some of them in improving the properties of a number of materials to become more solid than lead, as alloys were made of tungsten metal, which cannot be formed, by introducing other materials to it such as iron, nickel and cobalt in proportions Thus, the product became a very solid substance, its hardness exceeds that of lead.

Development of industry between science and its capabilities, and the reluctance of manufacturers and officials

On the other hand, Dr. Karimat El-Sayed contributed to helping industrial bodies in several areas, saving them huge sums of money and providing them with high-quality products with Egyptian hands, as she was able to teach some specialists in a glass factory the glass industry, by analyzing the materials that make up glass They were able to import raw materials and manufacture glass themselves.

Dr. Karimat worked on designing high-quality electronic materials that have high levels of insulation. In this context, a factory that manufactures electrical insulators found that there are quality products and others that are not, even though the material that makes up the manufacturing is the same, so he came to the unit with the product and the researchers in the unit analyzed the problem, and it was The result is that the material is the same, but the structural composition of the ineffective product is different. After that, the factory purchased the device on which the samples were analyzed, and the researchers in the unit trained cadres in the factory to use it. They are now working according to a purely scientific system, and their product has become more quality, and losses rates decreased due to the active substance.

El-Sayed, in cooperation with the research team, which includes professors, assistant professors, teachers and assistant teachers at the highest levels, was able to know the components of ceramics, and they enabled one of the ceramic companies that resorted to them to know them, and they (the companies) are now manufacturing them instead of importing them, and thus we saved them large sums of money in importing.

In addition, some poultry breeders faced at one time the problem that all their poultry had lameness without the cause of this injury being clear, which prompted them to resort to the unit that requested a sample of the feed that the poultry eat and it turned out that it is completely free of calcium and therefore it is normal for these poultry to become infected rickets.

The crystallography scientist was not satisfied with research and discoveries and helping others to develop their work and increase its efficiency, but also resorted to organizing courses and lectures in several regions and universities, and organized more than 15 educational workshops to disseminate this work.

The number of specialists in this science at the level of Egypt is very small, not exceeding 25 researchers, due to the most difficult science that requires full knowledge of several other sciences, including spatial engineering, chemistry, physics and biology, and despite the small number of specialists in crystallography, the users of it are many.

It is noteworthy that Prof. Dr. Karimat El-Sayed held many scientific positions, including being the president of the Crystal Society and the head of the National Committee for this science, in addition to being a member of the national councils, and she also assumed the presidency of the International Federation of Crystals Education Division for 3 years, in addition to her attendance at most international conferences. held in this field worldwide.

Dr. Karimat was awarded the L'Oréal-UNESCO Awarad for Women in Science, 2003. This award rated $100,000 to women leaders on every continent. She was one of five Arab women to receive this award between 1998 and 2010.

Karimat El-Sayed passed away on November 21, 2016, after a long journey of giving, after which Ain Shams University announced Karimat El-Sayed Award, an academic award granted by Ain Shams University to the author of the best single research at the university level in the field of crystallography, and it is required that he be one of the arbitrators. For research, a member of the National Committee for Crystallography, and the value of the prize is "1500 pounds".