Dr. Islam Hegazy, Director of the Network and Information Technology Center at Ain Shams University, confirmed that the university has been striving to develop the information technology infrastructure, with the aim of keeping pace with the times, implementing the state's plan for digital transformation and supporting the university in reaching the level it has always sought through its leadership, scholars, researchers and students.

He added that the university worked to achieve these ambitions through several steps that began by integrating all information technology units at the university, with the aim of facilitating communication and integration between units and providing an institutional building capable of providing the best technological services to the university and external community alike..

He indicated that the information infrastructure has been developed through the establishment of a new information center that keeps pace with the latest technological developments, and is expected to open in the near future, after it has been equipped with the latest devices and capabilities necessary to provide the best services to users.

Hegazy added that the university's efforts to develop the technological system in its departments included the modernization of devices for developing network connectivity in the main data center, as highly efficient devices were developed that can provide the required services for the university community. 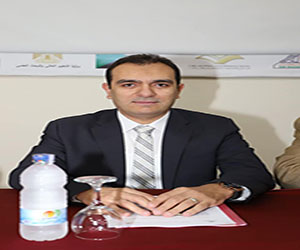 During the recent period, the main website of Ain Shams University was developed, to appear in a new way, and to provide greater services and information for visitors, whether they are from the university community (students, faculty staff, teaching assistans, employees) or from the outside community, and thanks to these developments and updates on the website Main University The university was able to participate in a number of competitions to evaluate university sites, and it passed a number of stages in this competition, which includes various universities at the level of the Arab Republic of Egypt.

The update did not stop on Ain Shams University website, the main website only, but it also included updating and developing the websites of the various faculties of the university to appear in the form that suits them, and meets the needs of all visitors.

Hegazy pointed out that the development and modernization steps included in the information technology units included starting training to obtain a digital transformation certificate to raise the level of efficiency of graduate students, faculty staff, Scientific research and its development faster, in addition, in implementation of the directives of the Supreme Council of Universities.

Through this unit, participants are given training courses, during which they are introduced to the mechanisms of using modern technology and how to use it to facilitate access to modern scientific information, in addition to communicating with researchers around the world in the preparation of remote scientific research.

Increasing the internet capacity and speed

The head of the Network and Information Technology Center said that the plan for development and modernization in the information technology units also included the start of infrastructure development in 7 faculties at Ain Shams University, which are: Education, Commerce, Law, Dentistry, Postgraduate Studies for Childhood, Archeology, in addition to the Agriculture Institute in arid areas, and through this development, all these colleges will be provided with modern capabilities that help in digital transformation, and coincided with the provision of these capabilities, a training plan for employees on how to use these advanced technologies.

He added that, based on the fact that the Internet is the main link for accessing information and facilitating communication, it was necessary to move forward in increasing the capacity of the Internet, which reaches Ain Shams University and its various colleges, so work was done to raise that capacity to reach 2 GB, after it was 300 Mega, and thus Ain Shams University was able to provide a very good internet service for all its faculties and its administrative and medical annexes.

He explained that all university faculties were connected to the main data center that provides internet service, as well as all university hospitals, as well as the field hospital that was created with the emergence of the Corona pandemic, in addition to the reference laboratory for university hospitals specialized in PCR analysis at the level of the Arab Republic of Egypt, which is affiliated with the Council The highest, which is hosted by the university in its premises.

Dr. Islam Hegazy said that the work on developing the information technology system at Ain Shams University did not stop there, as work has been done to establish the university's e-learning system, which has increased significantly since the emergence of the Corona pandemic, as all university faculties were able to exploit this system during The last period, and Ain Shams University was among the leading universities at the level of the Republic in committing to e-education during the pandemic period, and development plans in the e-learning system are still continuing to increase its effectiveness and efficiency.

A question bank has also been established for the university's electronic exams, which is an innovative step that helps students and researchers to take exams remotely, in order to ensure social distancing during the pandemic period.

Dr. Islam Hegazy stressed that Ain Shams University and its leaders are still keen to develop the information technology system and its units because of their great importance in communication and achieving the digital transformation that Egypt seeks in the coming years in implementation of the directives of President Abdel Fattah El-Sisi.