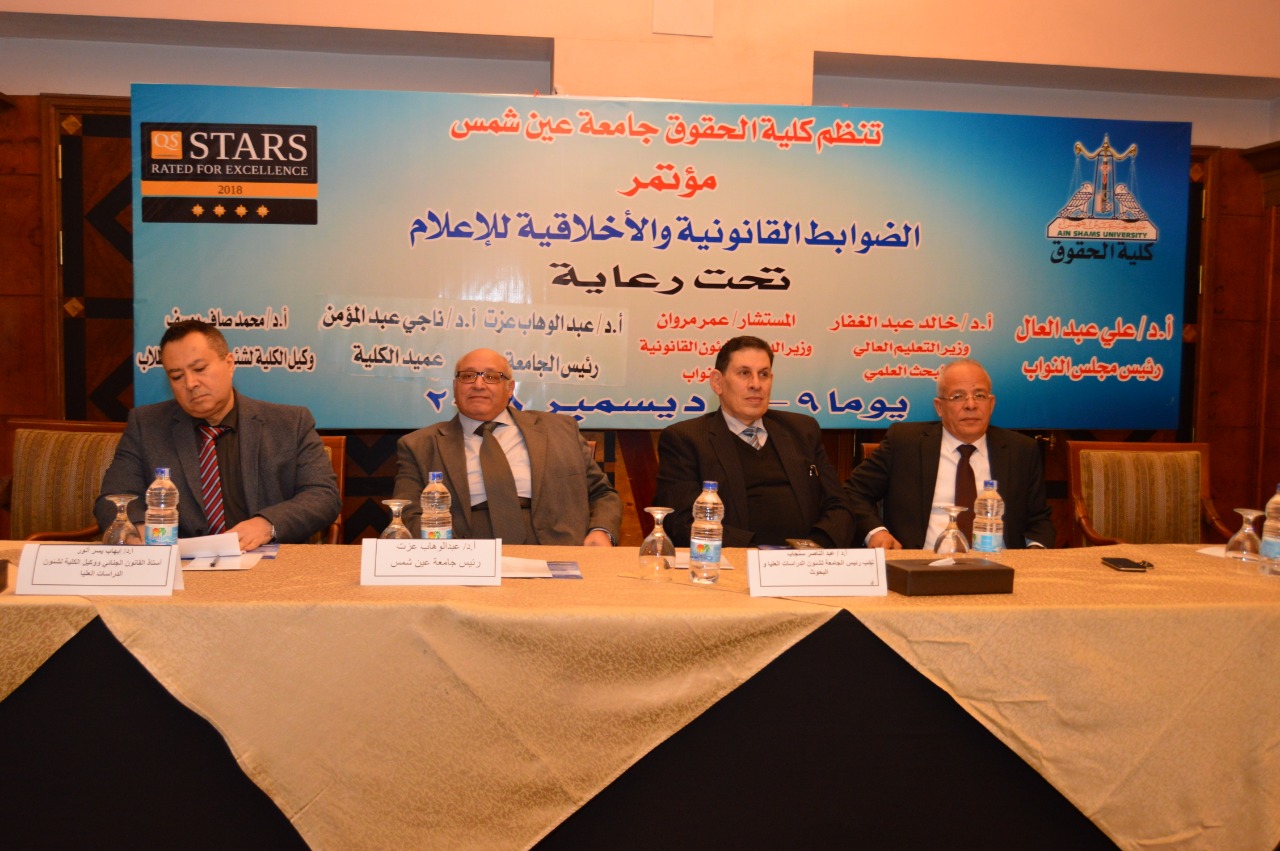 Counselor Omar Marwan, Minister of State for Legal Affairs and member of House of Representatives and Prof. Dr. Abdul Wahab Ezzat, President of Ain Shams University opened the International Conference of the Faculty of Law, Ain Shams University, entitled "Legal and Ethical Controls of Media". This was in the presence of Prof. Dr. Abdul Nasser Sengab Vice President for Graduate Studies and Research, Prof. Dr. Nagi Abdul Moumen, Dean of the Faculty of Law, President of the Conference and Prof. Dr. Mohammed Safi, Vice Dean for Education and Student Affairs, Conference Rapporteur and a group of Arab university professors.
Counselor Omar Marwan stressed the importance of freedom of expression and freedom of responsibility. He also reviewed the keenness of successive Egyptian constitutions on the importance of preserving the freedom of expression of opinion and thought within a framework of responsibility. He also referred to the Constitution of 2014 where he was more concerned with providing freedom of opinion, to prohibit the imposition of negative penalties for freedoms in publishing crimes except in cases of incitement to violence or discrimination between citizens or to challenge the symptoms of people except that cannot be imprisonment.
Omar Marwan also praised the role of the Higher Council for Media Regulation, the National Media Authority and the National Press Agency in preserving the freedom, professionalism and diversity of the media.
Prof. Dr. Abdul Wahab Ezzat also praised the choice of the Faculty of Law for the title of the conference "Legal and ethical controls of the media", which reflects the university's tendency to recognize the society's problems which constitute a danger and concern for society and to identify its dimensions and try to find appropriate solutions. Which draws youth information and opinions from them.
Prof. Dr. Nagy Abdul Moumen explained the importance of addressing the legal and ethical controls governing the media because of the influential role of the media in society, where the media is a double-edged sword, either an enlightening platform or a demolition target.
He pointed out that the most important values that the media must preserve are the interest of the nation and everyone in all its bodies and bodies to work to achieve and raise the Egyptian state, stressing the importance of the exit of the Conference valuable recommendations can be applied.
Prof. Dr. Mohamed Al- Safy reviewed the two sessions of the six-day conference discuss the rules of international law relating to information, the responsible freedom of the media and its role in promoting legal awareness, foreign investment and sustainable economic development, as well as procedural protection in the field of media and civil and criminal responsibility for media abuses.
++++++++++++++++++++++