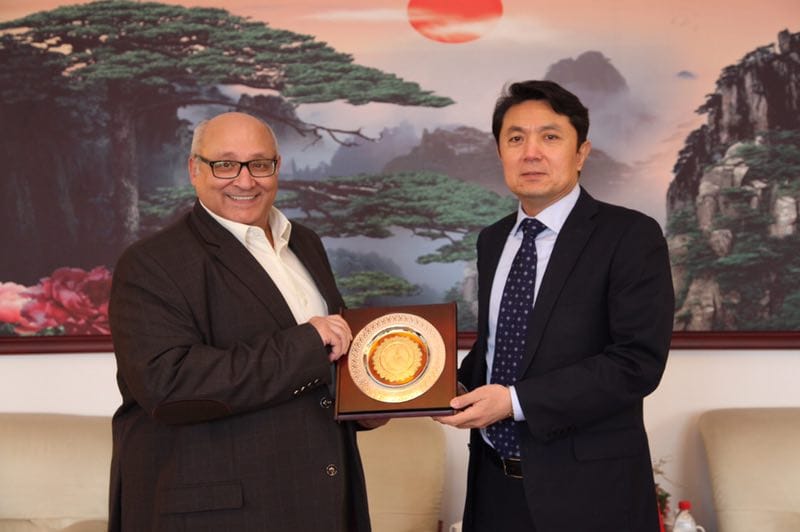 Prof. Dr. Abdel Wahab Ezzat, President of the University, accompanied by Prof. Dr. Esraa Abdel-Sayed, Director of the Office of International Cooperation and Dr. Sherif Al-Kotb, director of the project development unit, conducted an exploratory visit to the medical academy in Tianjin City. As well as its educational hospital, as part of the work trip by the University President and members of the delegation accompanying him last week to the People's Republic of China to conclude a number of important agreements with major Chinese universities. Prof. Dr. Esraa Abdel-Sayed announced this.

She added that the visit of the delegation of Ain Shams University to the Medical Academy and its educational hospital in Tianjin, came to view the latest medical developments and research fields related to them and try to benefit from them and seek to transfer and exchange experiences. Thus contributing to the development of the health system in university hospitals and in line with development plans Sustainable development of the State.

The delegation of Ain Shams University was received by the President of the Medical Academy, who expressed his desire to establish cooperative relations at all levels of the medical sector in Ain Shams University Hospitals, as an extension of the previous partnerships between the University and a number of Chinese universities and medical bodies.

He also praised the international reputation enjoyed by Ain Shams University Hospitals and its ownership of many doctors with international expertise in many specialties.

Prof. Dr. Esraa Abdel-Sayed pointed out that the Tianjin Medical Academy has cooperative relations with 300 faculties and research institutes in more than 40 countries. It is also one of the best hospitals in China serving a wide range of patients, nearly 2,000 patients a day.

With regard to scientific research at the Academy, Prof. Dr. Esraa Abdel-Sayed developed and adapted to the latest global systems, and this is demonstrated by the recognition by the World Health Organization of the medical school certificate from that academy. The students will spend the first five years of the program on campus, followed by two years at the Tianjin Teaching Hospital. They are taught by some of the most renowned professors of the Tianjin Medical Academy in China and the world, followed by the internationally accredited MBBS degree.

At the end of the visit, the President of the Medical Academy gave the academic shield to the President of Ain Shams University in recognition of his keenness to overcome the means of cooperation between the two sides.