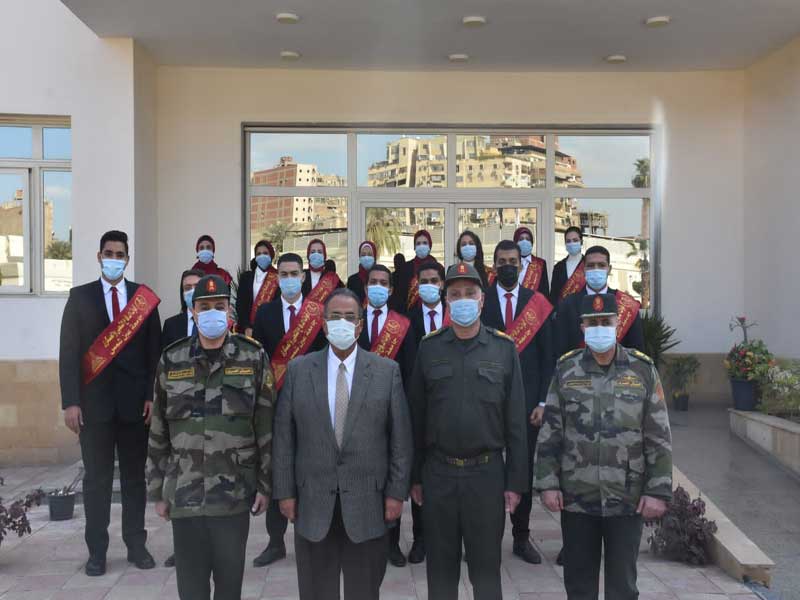 Within the framework of the fruitful and constructive cooperation between Ain Shams University and the leadership of the Popular and Military Defense Forces, a visit was organized for the casualties of the operations in Sinai, under the auspices of Prof. Dr. Mahmoud El-Metini, President of the University, and the presence of a. Dr. Abdel Fattah Saoud, Vice President for Education and Student Affairs, under the supervision of the University’s Military Education Department.

A delegation from Ain Shams University went to Helmeya Military Hospital to visit the wounded of the armed forces in terrorist operations in various military sites in Sinai, including officers and soldiers, who are receiving treatment in the hospital, within the framework of the student visit scheme that is implemented at the university.

Helmeya Hospital of the Armed Forces received the Commander of the Popular and Military Defense Forces and Prof. Dr. Abdel Fattah Saoud, Vice President for Education and Student Affairs, and a delegation of distinguished university students, to visit the heroes of the armed forces injured in the operations waged by the army against terrorism in some limited areas in central and northern Sinai, in gratitude and appreciation for the heroism and sacrifices offered by the sons of the armed forces in defense of the homeland and preservation its sanctities, and at the beginning of the visit, shields were exchanged between Major General Tarek Lotfy, Director of Helmeya Hospital, and Prof. Dr. Abdel Fattah Saoud, Vice President of the University.

On his part, Prof. Dr. Abdel Fattah Saoud said that the visit aims to instill the values ​​of patriotism and belonging in the hearts of students and to see the national role played by the armed forces in protecting the country’s external borders and combating terrorism. And state agencies in the fight against terrorist and outlaw elements, praising the continuation of construction and development efforts in various fields to advance the country and raise its status.

"Saud" also asked the students accompanying the delegation to convey this picture to their colleagues inside the university faculties, which shows the extent of the great sacrifices made by the men of the armed forces who shed their smart blood on the soil of the sacred homeland in order to provide security and safety, defend the borders of the homeland and protect the Egyptian people.

The students commended the heroic role of the armed forces in the face of terrorism, expressing their wishes for a speedy recovery and a return to completing their sacred tasks in defending the land and people of Egypt, stressing that the people of all categories appreciate the sacrifices made by the heroes in protecting the borders, securing the home front and confronting groups of darkness and destruction. With courage and determination to make every citizen enjoy security and stability.

For their part, the injured expressed their happiness with the visit, which expresses the cohesion of all segments of society with the armed forces and their sons who will not allow anyone to threaten or intimidate the people or prejudice national security, and that upon their recovery they will return to service in their places again.