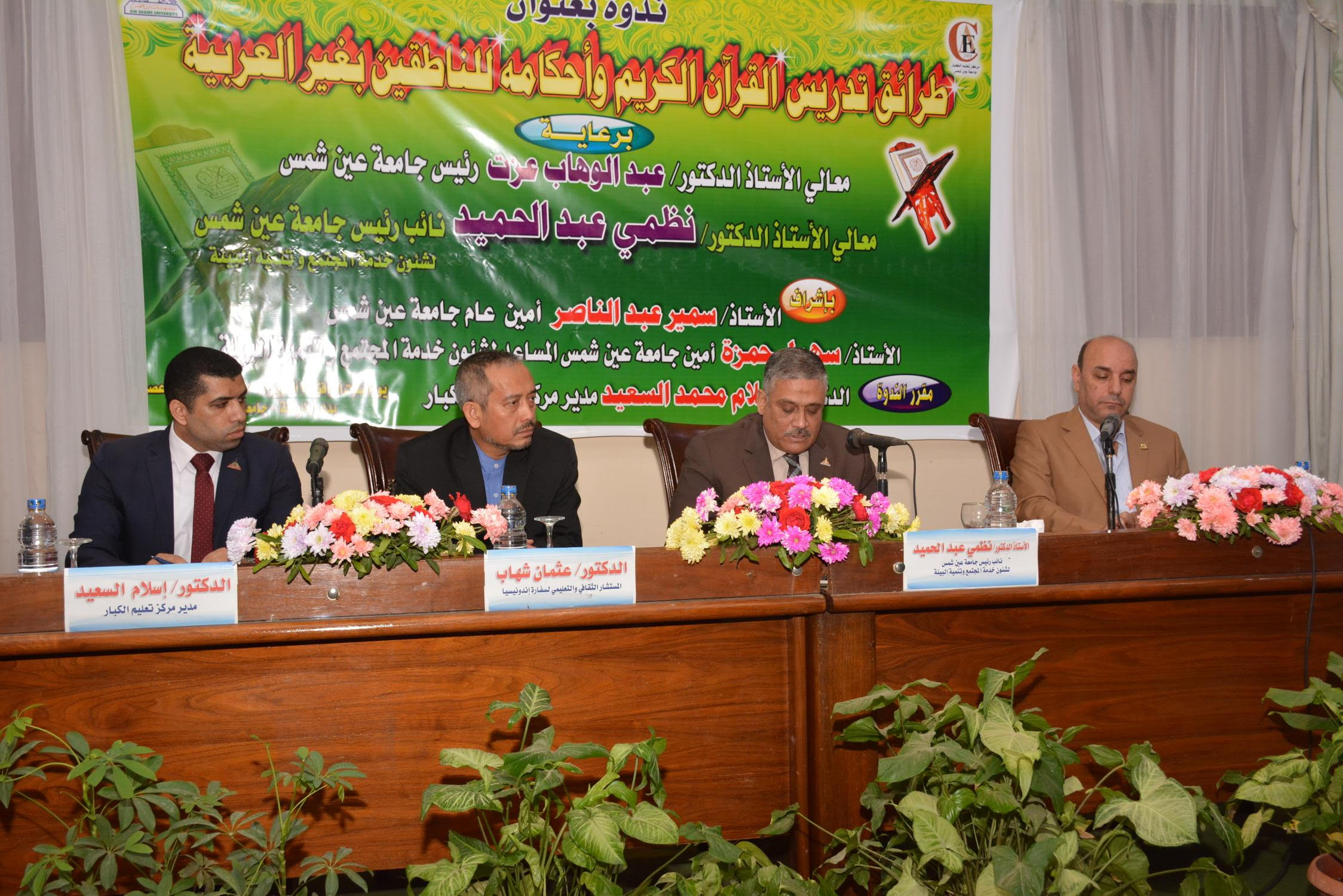 Prof. Dr. Nazmi Abdul Hamid, Vice President for Community Service and Environmental Development, pointed out that languages are one of the most important criteria for measuring the effectiveness of nations. Pointing out that in so far as, these languages are of originality, vitality, spread and ability to keep up with the spirit of the times, Languages of high prestige, and a great role in the field of cultural progress.

He pointed out that the nations have advanced their language education, and made every effort to develop and disseminate it outside the scope of their speakers in order to acquaint others with the thinking and work. It involves the desire to communicate with its owners and to cooperate with them culturally, socially, politically and economically.

He added that the Arabic language is one of the oldest and richest languages ​​at all, so God chose it to be the language of the Holy Quran, before Islam reached the height of its perfection in the expression of all the fundamentals and everything about life.

The emergence of many sciences coincided with the descent of the Holy Quran, such as history, medicine, chemistry, and the sciences of the Arabic language. The language of the Arabic language became more prevalent in Arab and Muslim countries because of the strength of its statement, the authenticity of its words and the abundance of its meanings. Therefore, the non-Arab speakers were keen to study this language and define its vocabulary and meanings and everything related to it. The so-called Arabic language instruction for non-Arabic speakers was introduced, and the Holy Quran and its provisions were taught to non-Arabic speakers.

Stressing that when we convey our language, this does not mean the transfer of vocabulary and sentences, but also transfer our civilization and our flourishing history and our religion, and then only the Arabic language has the right to be on the throne of priority and precedence.

Dr. Islam Saeed, director of the Center of Adult Education explained that the Center holds such seminars based on the educational role of the center, which has many functions and roles that are not limited to adult literacy but also the development of skills. He noted that there is a correlation between the Arabic language and the Quran, as the Quran did not come down for reading and recitation only, but also to consider.

The opening session of the symposium witnessed honoring of Osman Shehab, cultural and educational counselor of the Embassy of Indonesia.

Prof. Dr. Amani Osama is acting as the Vice Dean of the Faculty of Pharmacy for Community Service and Environmental Development