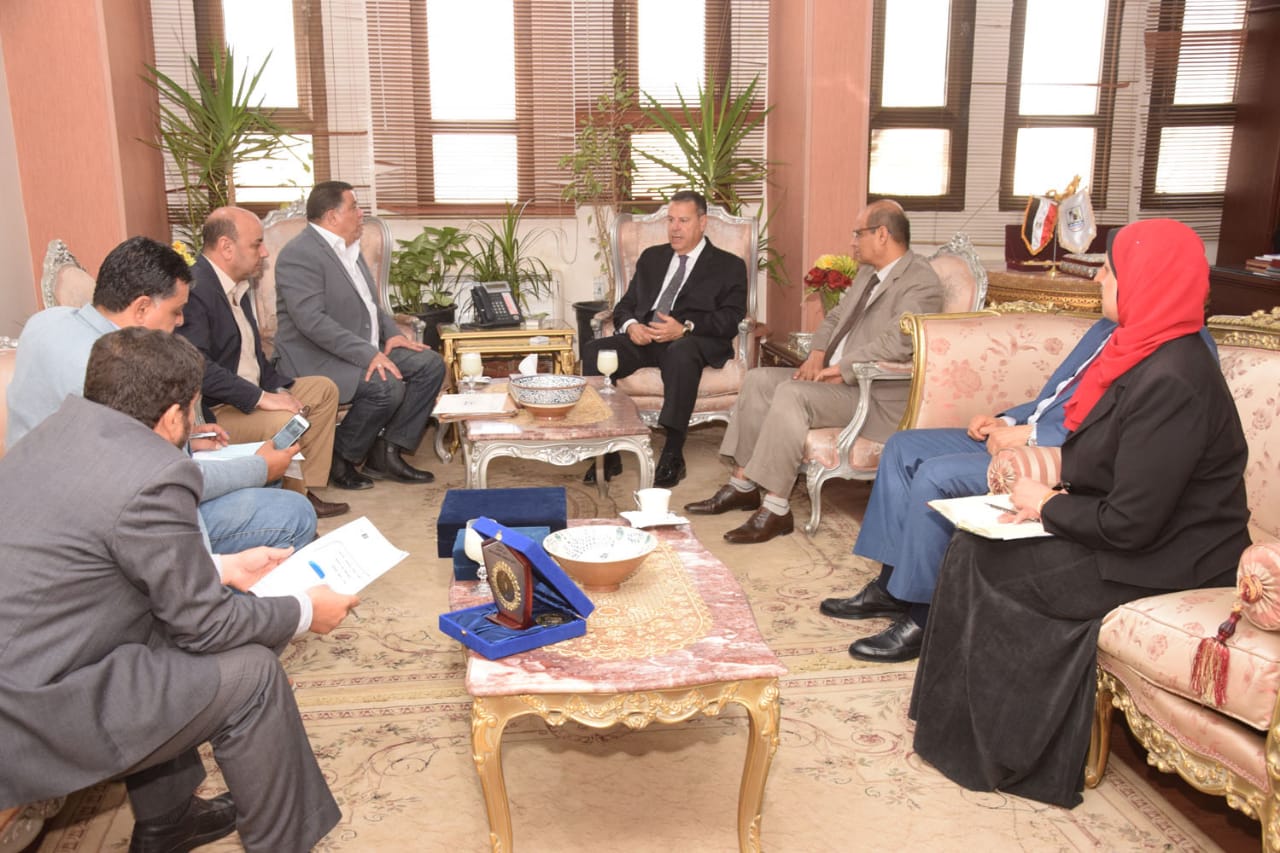 Chancellor Hany Abdel-Gaber Governor of Beni Suef received the delegation of Ain Shams University, under the leadership of the Secretary-General of the University, Mr. Samir Abdel-Nasser, accompanied by Mr. Suhail Mahmoud Hamza, Assistant Secretary for Community Service and Environment Development, and Mr. Tareq Amer, Director of Communications and Conferences Department. In the presence of Major General Issam Al-Alqami, Secretary General of the Governorate and Counselor Nadi Abdul Latif Legal Adviser to the province.

The meeting discussed all the arrangements related to the launch of Ain Shams University for its comprehensive development convoy in Beni Suef in late November.

The visit was based on the directions of Prof. Dr. Abdul Wahab Ezzat, President of the University and Prof. Dr. Nazmi Abdel Hamid, Vice President for Community Service and Environmental Development.

During the meeting, Chancellor Hany Abdul-Jaber praised the role of Ain Shams University in serving community issues through its constant efforts to guide its community services to the different governorates of the Republic.

He explained that the selection of the villages of Beba and Al-Fashn in Beni Suef governorate as the most needy, to guide the various medical, therapeutic, awareness and social services of the people of those villages.

He added that the convoy directs its comprehensive services through four main axes:

Medical Center, which includes free clinics for various medical specialties including "Internal, children, women, obstetrics, dermatology and others" as well as clinics for measurement of sugar and pressure and analysis of the detection of virus C, which is provided free of charge under the supervision of specialized professors of medical and nursing schools.

As for the second axis of the convoy is specialized in the pharmaceutical sector, where a pharmacy is provided to dispense medicines free of charge to patients after the signing of medical examination through specialized professors from the Faculty of Pharmacy and in coordination and cooperation with a number of pharmaceutical companies.

Mr. Samir Nasser pointed out that the third axis of the convoy focuses on community services, which branch out to a number of activities, including educational seminars and awareness of the people of the village in a number of topics, as well as the distribution of 800 blankets free of charges to the people.

On the fourth axis, he explained that it includes the literacy classes through which committees of the exams are held immediately to obtain literacy certificate for those who can read and write, in addition to the TOT courses held in coordination with the Center for Adult Education at Ain Shams University and the Literacy and Adult Education Authority.

The fourth axis of the convoy includes a number of artistic activities held under the supervision of specialized professors from the Faculty of Specific Education Ain Shams University. Among these activities is an exhibition of plastic arts, children's education, printing on clothes, ceramics, clay, etc., as well as a number of artistic and entertainment competitions.

Mr. Samir Abdel Nasser stressed that Ain Shams University was keen on coordination and cooperation with a number of civil society organizations, including the Rotary clubs of Qasr El Nile and New Cairo.

After the preparatory meeting, Mr. Samir Abdel Nasser gave the shield of the university to the advisor Hany Abdel-Gaber Governor of Beni Suef in recognition of his efforts to overcome all obstacles and facilitate ways of cooperation between the two sides.

Inauguration of the literacy project headquarters at Faculty of Al-Alsun

The future of the Middle East region, Egypt Vision 2030, at a conference at Ain Shams University